But the show isn’t merely a valentine to romance. Love of all kinds — love for family members, friends, for one’s self — is celebrated in the multimedia effort, says Percolator board member and exhibiting artist Rachael Perry.

This year’s work — the exhibit is open to artists of all ages and skill levels — includes everything from painting and printmaking to mixed-media sculptures and assemblages made with found objects. 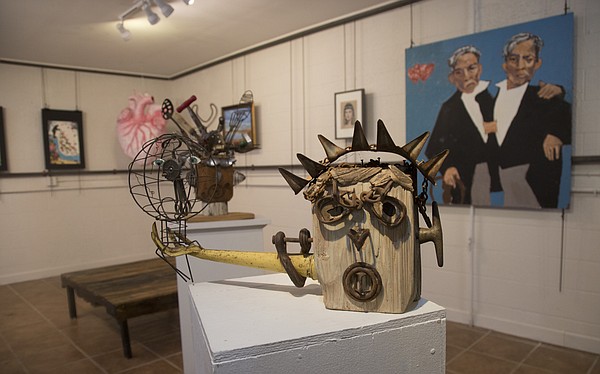 “The pieces are really diverse and really fun this year,” she says. “People are really looking at love in all its complexity and not just through one single lens.”

Perry, whose Lawrence Inside Out project saw the installation of hundreds of black-and-white photographic portraits around the city in 2015, has fashioned a collage out of old photos she discovered in the dumpster behind the Social Service League, 905 Rhode Island St., which is near the Percolator.

Comprising mostly professional and amateur snapshots of children from 1950s-era Garnett, the photographs portrayed kids in class portraits and dressed up with friends on Halloween.

“It reminded me of how it felt to be in elementary school,” Perry says of her creation. “You have this whole dynamic of group love and group hate and all the social aspects of being alive when you’re that age.” 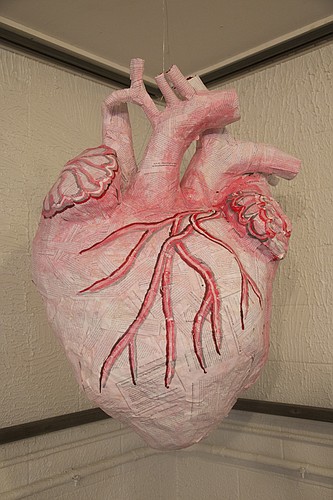 A sort of artistic jack-of-all-trades, MacKinnon works in a variety of mediums, including printmaking, painting, textiles and ceramics. But she’s never done anything — at least not with papier-mache — on the same scale as her “Group Love” submission, a 3-foot-tall, anatomically correct replica of a human heart covered in pages taken from the Diagnostic and Statistical Manual of Mental Disorders, or DSM.

Alternatively titled “My Lumpy Heart,” “A Broken Heart is a Beating Heart,” and “Love Letter to Bert Nash,” the papier-mache sculpture pays tribute to the Bert Nash Community Mental Health Center, where MacKinnon has been a client for nearly all of her eight years in Lawrence. 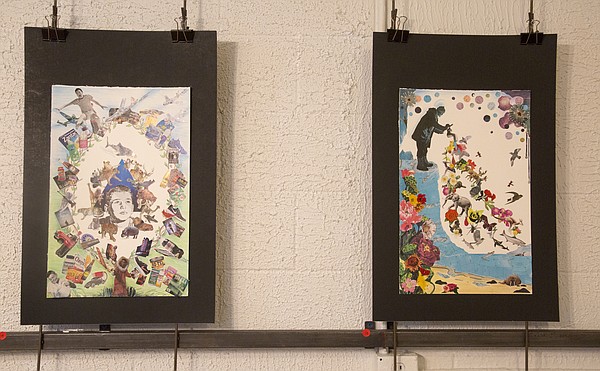 She credits the facility’s dialectical behavioral therapy program (the approach is geared toward recognizing and ultimately regulating harmful behavior, such as self-harm, substance abuse and suicidal thinking) with helping her “navigate the world better.”

“The people who work there, even the bookkeepers and receptionists, I feel like they go above and beyond taking care of humanity. They’re spreading love outward,” MacKinnon says. “They do this for a living, but it’s more than just having a job.”

Between her teaching at the Lawrence Arts Center and a part-time gig at the Lawrence Public Library, MacKinnon’s schedule doesn’t leave much time for art shows. But honoring love — especially the compassion and empathy she’s experienced at Bert Nash — make the Percolator's show worthwhile.

“It’s hard to use language without sounding cliché,” she admits. “But, really, love and the way it’s expressed and the way people take care of each other…really, that’s the currency to be alive.”