More than 750 cyclists are expected to roll into town (we’ll try to keep the bicycle jokes to a minimum here) when the eighth annual Tour of Lawrence kicks off Friday.

The three-day event, sanctioned by USA Cycling, is presented by U.S. Bank and made possible by eXplore Lawrence. It is slated to draw upwards of 7,000 spectators as athletes compete in street sprints and races, both of the circuit and criterium variety, in locations across Lawrence.

“It’s matured over the years through word of mouth,” says event organizer Bob Sanner, who alternately describes his title as “head trash collector” of the races. “From the first several Tours of Lawrence, it was people coming through and seeing if Lawrence knew anything about hosting or organizing a cycling event. We’re into year eight, and I think it’s been demonstrated that, yes, we do.” 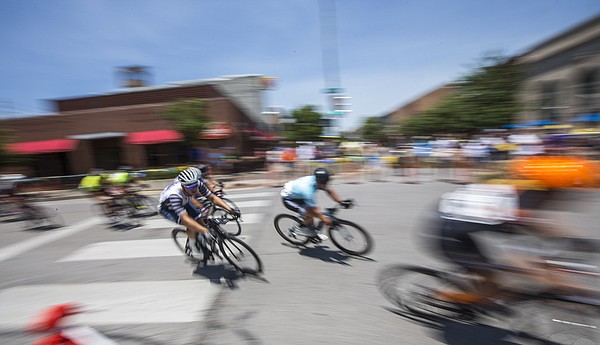 Cyclists competing in the men's pro race speed around a corner during the Tour of Lawrence downtown criterium Sunday, June 28, 2015. by John Young

The city of Lawrence, he says, provides a perfect backdrop for the tour, which this year includes venues such as the Haskell Indian Nations University campus and the Historic Breezedale District. Downtown Lawrence also plays a vital role, with the stretch of Vermont Street between Seventh and Ninth streets hosting street sprints, the tour’s first official event, Friday at 6:30 p.m.

From 6:30 to 10 p.m. that night, Tour of Lawrence will host a free kids’ zone in the nearby area of Eighth Street between Vermont and Kentucky streets. The fun includes a bounce house, inflatable games, food and drinks — though refreshments will cost you extra — and, once the race ends, live music from Wichita-based alt-country rockers Split Lip Rayfield in a free street party for cyclists and spectators alike.

Saturday’s races through the Haskell campus and Breezedale neighborhood begin at 9 a.m., while Sunday kicks off perhaps the biggest day of the tour with criterium races at 9 a.m. The course starts and ends at the intersection of Ninth and Massachusetts streets, with some of the top names in competitive cycling whirring past spectators on a track looping the blocks between Seventh and 10th streets.

Little ones are invited to get in on the action, too — aside from the return of the kids’ zone from 9 a.m. to noon Sunday on Eighth Street between Vermont and Massachusetts streets, young cyclists will have the chance to compete in a free kids’ race that day at 11 a.m. Mandatory registration will take place between 9:30 and 10:45 a.m. on Ninth Street between Vermont and Massachusetts streets, and helmets are required.

Prizes include a Tour of Lawrence medal for the first 300 participants, coupons for downtown businesses such as TCBY and Ingredient, and the opportunity to win one of three $100 gift certificates to Sunflower Outdoor & Bike Shop.

Sunday also marks the return of Ad Astra Running Mass Street Mile footrace from 7 to 8 a.m. The event (registration is capped at 200 participants) includes categories for adults and kids.

Event organizers will be on hand throughout the races with water and pop-up tents to provide protection from the sun, Sanner says, though he’s hoping the projected forecast of slightly cooler temps (mid-80s for the weekend, as of press time) holds up.

And even if you’re not necessarily a cycling fan, you’re likely to encounter — and safely negotiate with, ideally — cyclists on the street this weekend, Sanner says.

Bottom line: respect one another and the rules of the road.

“I would encourage motorists to have an even greater awareness of what’s happening around them, and maybe take a second look before they turn or cross an intersection,” Sanner says. “These riders who are coming in have spent a lot of hours and have ridden a lot of miles on the highways and on the streets, so they’re very attune and aware of their surroundings.”

For more information, including a full schedule of events, visit www.touroflawrence.com.