A block-by-block guide to the Downtown Lawrence Sidewalk Sale

With nearly 100 local businesses slated to participate Thursday, July 21, the 57th annual Downtown Lawrence Sidewalk Sale is again expected to draw at least 10,000 savvy shoppers over the course of the day — that'd be sunup to sundown, or roughly 6 a.m. to 8 p.m.

While Massachusetts Street, particularly the stretch between the 600 and 1000 blocks, tends to attract the biggest crowds, bargain hunters would be remiss to not venture off the beaten path, says Sally Zogry, director of Downtown Lawrence Inc. Venues located a little farther down Massachusetts Street — or just off it — boast their fair share of treasures, too.

Also, “Just because a business is not outside does not mean they’re not participating,” Zogry advises.

Among her tips: Dress for the weather, stop by the cooling stations to keep hydrated, visit the portable toilets at the breezeways in the 700 and 800 blocks of Massachusetts Street if you need to, and bring a buddy — “it’s more fun,” Zogry says. Those arriving early in the morning may have more merchandise to choose from, but often the best deals are found later in the evening. 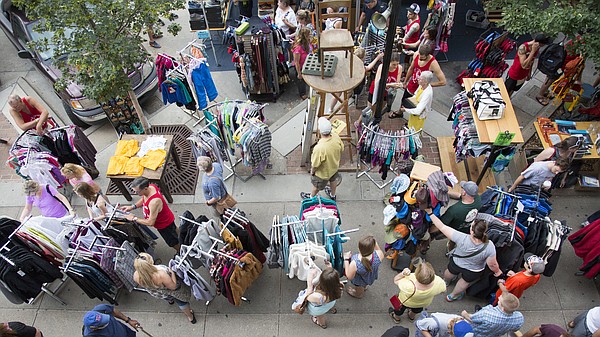 “There’s a little something for everyone,” she says. “If you’re somebody who wants to get the $5 deal, you can get it. You can outfit your whole house, your closet, your dog or cat.”

Or, forget about the shopping (at least momentarily) and stop by the Journal-World’s booth at the corner of Ninth and Massachusetts streets for Town Talk Live with managing editor Chad Lawhorn (there will also be gift card giveaways, to further entice you) from 8 to 11 a.m.

In the meantime, we’ve compiled a short-ish rundown of a handful of the many businesses (because there are really too many to mention here) participating in the sale this year. We’ve also pointed out where to cool off, find food and get your face painted. Good luck, shoppers!

Take a respite from the heat (you won’t find goods on the sidewalk here, for obvious reasons) inside Waxman Candles, where all votive candles are marked down to $1.10. Various candle holders and other odds and ends will also be on sale.

Enjoy a 12-percent discount on everything inside the shop, plus markdowns on some greeting cards — 25 cents each or five for a dollar.

Load up on discounted stationery essentials such as greeting cards, envelopes, cardstock and gift wrap at the letterpress shop, which is also slashing prices by 10 percent storewide.

Everything’s marked down inside the shop (employees are keeping things hush-hush on specifics for now) and out, where sidewalk shoppers can snatch up books at $2 or less a pop.

Browse through Made’s inventory of gift-y (and often locally made or local-centric) items — which include jewelry, prints, flatware and other home goods — all at 10-percent off. Also, keep an eye out for deeper cuts on select products around the store.

Cooling station: Take a load off at the Eldridge Hotel, 701 Massachusetts St.

Cash-strapped fashionistas, pay heed: Starting at 5 a.m., the trendy boutique will offer racks of clothing with some items marked down to $5. Special giveaways, extra discounts and other surprises will be offered throughout the day.

Sunflower is historically one of the busiest locales as far as bang-for-your-buck deals go, and this year’s sale is no exception: All past-season inventory — including winter clothing, shoes and accessories — will be marked down by at least 50 percent. All other items, i.e. bikes and summer gear, will be discounted 10 percent.

It’s a music lover’s paradise at the downtown emporium of all things cool, where shoppers can peruse 10-percent-off new CDs and LPs, 30-percent-off used CDs and hundreds of $1 records. The store is also selling limited-edition Love Garden tank tops in honor of the Sidewalk Sale.

Refreshments: Air Summer Sno will be selling shaved ice to hungry shoppers in front of the law offices at 808 Massachusetts St. toward the end of the day.

Stock up on overstock and newly discontinued yarn, plus a few sample garments, for 35- to 50-percent-off. Then get to work on that scarf idea you saved on Pinterest ages ago, because winter is coming.

You’ll find pretty much any and everything marked down at the department store, from clothing to home wares. Some noteworthy deals include Weavers’ inventory of high-end Wusthof knives, which will start at $5.99 for the paring variety, as well as unspecified (but steep, Weavers assures us) markdowns on linens and Fiestaware. Also enjoy up to half-off all luggage, 50- to 60-percent cuts in women’s shoes, accessories, sunglasses and jewelry, and hundreds of dresses and in-season women’s sportswear for $9.99 and up. In the men’s section, look out for deals on Bill’s Khakis shorts and long-sleeved shirts.

Enjoy markdowns of 20- to 50-percent-off at the Toy Store, where you’ll find a large offering of discounted doll furniture, books and Playmobil products in particular.

Refreshments: Fuel up at the Mad Greek, 907 Massachusetts St., where employees will be selling coffee and pastries in the morning hours. Also, check out the food hub at the U.S. Bank Plaza, 900 Massachusetts St., where La Familia Café & Cantina, Fine Thyme Food and Chocolate Moonshine Co. will be selling everything from breakfast burritos to fudge for hungry passersby.

Amusements: Get your face painted (for fun, or because you’re looking to intimidate your fellow shoppers with a little war paint) at Aunt Nancy’s Face Art, 944 Massachusetts St. Also, take a dance break at the U.S. Bank plaza (900 Massachusetts St.) with Jami Amber Lynne during the Brown Bag concert from noon to 1 p.m.

Take 50 percent off (or 55 percent, if you’ve got the Urban Outfitters app) all sale items in the hipster haven, which includes men’s and women’s clothing, shoes and accessories.

Refreshments: ManaBar tea lounge, 1111 Massachusetts St., will be parked outside with hand-squeezed lemonade and iced tea (including locally brewed kombucha) for sale.