The retirees-turned-thespians of Theatre Lawrence’s Vintage Players call it “An Evening of Senior Moments,” but, as members of the group will attest, the annual comedy performance is more than colonoscopy jokes and predictable bits about failing memory.

“It’s funny,” Vintage Players director Mary Ann Saunders says of that particular brand of comedy. “But at the end of the day, it’s sort of depressing.”

“Senior Moments,” she says, is more about the kind of idiosyncrasies and human foibles we all experience, even those of us yet to experience the worst of the aging process. This year’s production — a mix of one-liners, “old vaudeville jokes” and improvised skits, from the minds of Vintage Players themselves or outside scribes — will be staged at 6:30 p.m. Saturday at Theatre Lawrence, 4660 Bauer Farm Drive. The performance is free, but a suggested donation of $5 (or more, if you're feeling generous) is appreciated. 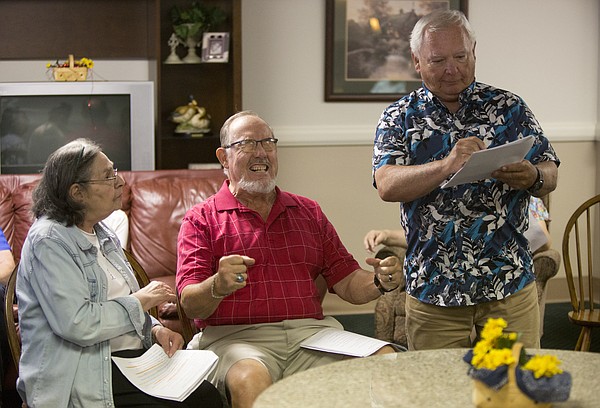 From left, Judith Scheff and Chuck Mosley perform a scene driving a make believe automobile as Jerry Morton pretends to be a officer giving a ticket to the pair during a Vintage Players performance at Vermont Towers, 1101 Vermont St., on Tuesday, July 12, 2016. The comedy troupe is staging its annual "An Evening of Senior Moments" show Saturday at Theatre Lawrence, 4660 Bauer Farm Drive. by Richard Gwin

A Theatre Lawrence staple since 2002, the comedy troupe performs regularly at area nursing homes and schools, including Cordley and Deerfield Elementary, where the actors share fairy tales with second graders through re-enactment. The idea, particularly with audiences who are older and often not as active as they once were, is to lift spirits and challenge preconceived notions of senior citizens.

“It lets us entertain them, because they’re confined and some of them are in ill health,” says longtime Vintage Players member Jane Robshaw. “And to see older people, that we’re still out there and performing. I’m 74 and I’m still going.”

Over the years, Saunders has seen Players come and go. Some are more active in the summer months after vacationing outside of Lawrence during the winter. Others, tasked with caring for sick loved ones, might not make every meeting, but find themselves healed — at least momentarily — when they do.

“We read new materials and share stories and laugh at each other quite a bit,” Saunders says, recounting anecdotes from fellow members with chronically sick loved ones. “I think there’s a lot of therapy in laughing. Good therapy.”

But mainly, she says, it’s about having fun. The mission statement of the Vintage Players quite literally is “Just have fun.” And that they do.

Saturday’s iteration of “Senior Moments” (Vintage Players never performs the same show twice in a row, as Saunders prefers to review new scripts and devise new material every year) will make use of the upcoming summer Olympics, bits inspired by “The Ellen Degeneres Show” and other topical elements.

And even though there’s more than a sprinkling of retiree-centric comedy involved, Saunders hopes the show will have a broad appeal.

“Some of the humor is based on the fact that we can’t hear as well or see as well, but there’s an awful lot of stuff in the world that’s funny no matter at what age you’re experiencing it,” she says. “You can find humor in just about everything, and I’m a firm believer that there’s not much out there that you can’t laugh at.”