Zach Frieling was sweating, his body wracked with nerves as the results began to roll in at last month’s SkillsUSA National Leadership and Skills Conference in Louisville, Ky.

He remembers the “shock” that came with the news that he’d won first place in the conference’s culinary arts competition, and also the pride in his supporters’ faces — his family, including a teary-eyed Mom, was in attendance, as were his instructors and coach.

“It was the best moment of my life, probably,” recalls Frieling, who works as line manager at downtown Lawrence’s popular Limestone Pizza. “I’m just glad I could make them all happy.” 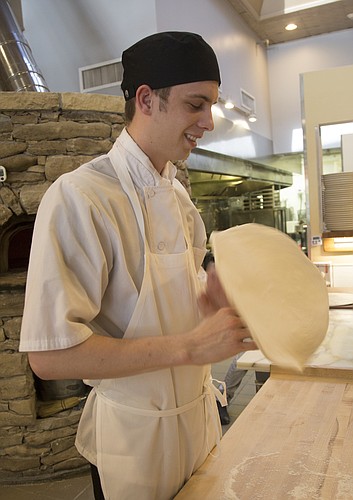 Frieling, 21, represented the state of Kansas and took home the gold medal at the competition, which pitted young chefs from across the nation against each other in a “Chopped”-esque contest designed to test organization, knife skills, cooking techniques, creative presentation, food safety, quality and flavor.

A spring 2016 graduate of Flint Hills Technical College, Frieling was asked by his alma mater to participate in the preliminary state competition held in Kansas City earlier this year while still a student. At the national cook-off in Louisville, he competed with college students for the top prize, which gave each aspiring chef a mystery basket with which to craft a four-course menu the night before the competition.

He thinks the soup probably helped push him over the top — “I was the only one that did a pureed soup,” Frieling says. “We couldn’t use electronic equipment at all, so I had to puree it the old-fashioned way of putting it through a strainer and mashing it through.”

Aside from the shiny gold medal, Frieling’s prize package also includes a full-tuition scholarship to the Culinary Institute of America in Hyde Park, N.Y. His mother, “crying again,” discovered a folder from the prestigious culinary school tucked away in a swag bag after returning to their Louisville hotel. Frieling had won seventh place in the national SkillsUSA competition last year, but never “anything like this before,” he now recalls of the moment.

For now, the young chef is trying to stay humble. Most in his position would set their sights on opening a restaurant, Frieling included, but he knows himself well enough to realize it’ll be a while before he’s “at that point.”

Frieling, who is quick to point out that he’s still “only 21,” credits longtime supporters like Limestone co-owner and executive chef Rick Martin for his success. Frieling’s enjoyed learning from industry professionals and hopes to continue.

“I’ve had a lot of great mentors, especially Chef Rick,” he says. “I’ve known him for almost six years now, and that guy has given me so much. I’m so happy to show him that it wasn’t for nothing.”