This month’s Off the Beaten Plate is a feast for the eyes as well as the stomach — although in my world, a “feast” probably entails more than two scoops of creamy, dreamy lavender-hued ice cream, but Zen Zero knows what’s best for me and gave me the standard size, thankfully.

If you’re intimidated by the fact that this ice cream counts a purple tuber (it’s called ube, and it’s a species of yam commonly found in Filipino desserts) as a main ingredient, don’t be.

Many recipes use frozen, grated yam, and at Zen Zero, you can definitely find tiny chunks of it folded into each scoop. It’s subtly sweet (less sweet than Thanksgiving-style candied yams) and has an almost buttery taste with slight floral notes, which makes for a refreshing dessert on a hot summer day.

(Look at me using “note” like I know what that even means. Does anyone, really?) 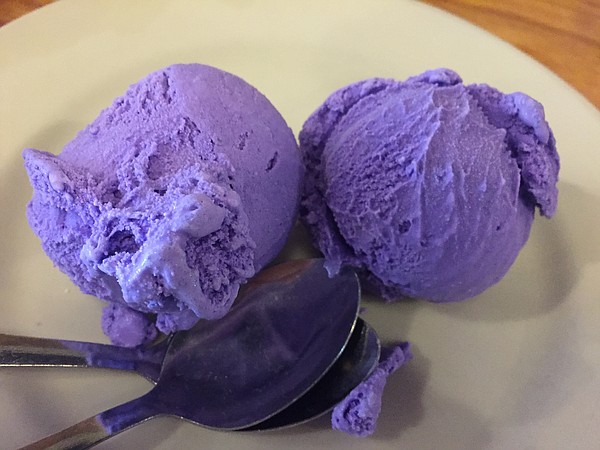 Where to get it: Zen Zero, 811 Massachusetts St.

Try it with: Heat up — and clear out those sinuses, bro — with one of Zen Zero's many curry dishes, then cool down with ~funky~ purple ice cream. (I opted for the panang curry this time around.)

Also on the menu: Mostly Thai noodle dishes, soups, salads and curries, with a few Nepalese, Tibetan, Japanese, Chinese and Vietnamese plates — many of them vegetarian — thrown in for good measure.

— Off The Beaten Plate highlights some of the more exotic, oddly named or inventively concocted dishes from local menus. Know of an offbeat item we should check out? Email reporter Joanna Hlavacek at jhlavacek@ljworld.com. Follow her at Twitter.com/HlavacekJoanna.