Free State Festival headliner Maria Bamford on getting older, saying no and the many endearing qualities of pugs

In her critically acclaimed, semi-autobiographical Netflix series "Lady Dynamite," comedian Maria Bamford mines her very real struggles with mental illness (the Minnesota native checked herself into a psych ward a few years back after being diagnosed with Bipolar II disorder, and subsequently checked out, at least partly, from Hollywood) for very quirky, very frenetic, at times very poignant laughs.

On Monday, she'll stop by Lawrence for a co-headlining appearance at the Free State Festival. Slated for 7:30 to 9 p.m. at Liberty Hall, 644 Massachusetts St., "An Evening with Maria Bamford" entails a stand-up performance by the funny lady in question, followed by a short film screening and Q&A.

Here, in an edited and condensed version of our interview with Bamford, the "Lady Dynamite" star and executive producer shares her thoughts on getting older, saying no and the many endearing qualities of pugs. 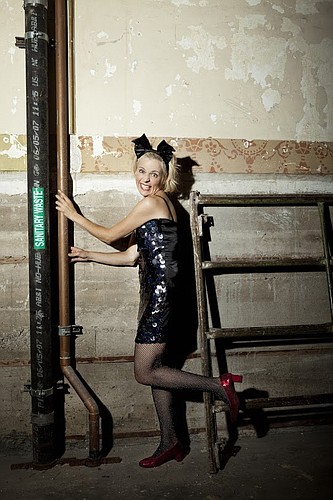 Maria Bamford is the star and executive producer of Netflix's critically acclaimed comedy series "Lady Dynamite." The comedian co-headlines this month's Free State Festival, and will perform her signature stand-up in "An Evening with Maria Bamford" Monday at 7:30 p.m. at Liberty Hall, 644 Massachusetts St.

Your show is very upfront about your experience with mental illness. Do you think “Lady Dynamite,” and other current shows tackling mental illness, would have been possible a generation ago? Are we undergoing some sort of shift that’s allowed a show like yours to be produced and be successful?

I think there’s been a huge shift in terms of hearing so many more people talking about it. I felt relatively comfortable talking about it. So many different shows are addressing different parts of it, whether it’s PTSD or OCD or bipolar. I haven’t seen a show featuring schizoaffective disorder or schizophrenia, but I can’t wait until that’s addressed. A main character with schizophrenia would be wonderful.

Your parents, or fictionalized versions of them, get a lot of screen time on “Lady Dynamite.” How do they feel about the show?

My parents called me after they’d seen most of it, and they just loved it and were really excited. I think my dad had some friends at the lake watch it and had sort of a party, which I think had been a mistake (laughs), because it’s not for everybody. But I know they’re very proud. My sister is very proud of it and thinks that it’s great. They were all just very happy for me. Obviously I couldn’t have done that show or any other stand-up or whatever without their support and love. I’m so grateful that this happened now in my life, because I have so much unconditional love around me that even if it was just a giant flop, it would have been OK.

The show does a great job of capturing this sort of quintessential Midwestern-ness, from your omnipresent politeness and cheery attitude to your dad taking you to the Dairy Queen for a pick-me-up after a rough day. But you actually spent your hospitalization in LA and not in your real-life hometown of Duluth, unlike what we see in the show. Why make that change in setting?

I didn’t do all the heavy lifting in the writing of the show, but I think it was more interesting to go back to Duluth and have this feeling of a different space to go into entirely. In real life, it was more complicated. I also wanted to be among friends — my friends are very important to me — so my parents came to visit me in LA when I was hospitalized rather than me going there. But there are some great mental health facilities in my hometown. They have a great psychiatric facility for kids, which I’m sure I would have taken part of when I was a kid. But when I was there, I think there were just nuns. And I would go sit on the couch and talk to a nun, which can be therapeutic in its own way.

Your character seems to really be living under the thumb of her own passivity and tendency to be overly polite in all situations — including one in which a therapy leader is unsuccessfully baiting her to get angry during a game of badminton — which I recognized as an issue that a lot of women in particular struggle with. Is that something you’ve experienced personally, this compulsion to always please and be polite?

I think it was definitely an observation of the writers. I, of course, like to think of myself as this direct, confident person, and it was funny to see the reflection of probably more of what I really am. I’m definitely passive aggressive. My husband’s from Philadelphia, and it’s funny how he’ll just say how he feels about something, and it’ll take me a few days to say, “Hey!” Or I’ll just kind of dance around it.

My dad sent me to a Dale Carnegie course when I was 16, and one of the primary (tenets) was “Don’t criticize, condemn or complain — compliment.” My father also told me, “If you want a man to love you, just listen.” What I interpreted that as is “Don’t talk, and always be positive,” which is so funny because my mom is not like that. My mom is a megaphone (laughs).

One thing I was concerned about in the portrayal of the hospitalization was that it would be realistic. Playing a game — like, that could never happen in a psych ward. There aren’t a lot of planned activities. If there are, they’re super depressing. They’re like, “We can have a dance class, but we all have to stay seated in our chairs.” What!? I was feeling bad before, but now you’re going to play REO Speedwagon, and I can’t stand up? (laughs)

Nope. I think, at least from what I could tell, it was a legal issue. There weren’t enough people to watch everybody, and maybe the disparity of ages of everybody in the ward. It was literally insanity, and very funny, in retrospect.

I wanted to talk a little bit about some of the awful but hilarious jobs that your character takes on despite some very serious misgivings — like, for example, a cartoon about Sea World produced by Bill Cosby, or “Lock Up a Broad,” the game show where women are literally caged until they apologize for their alleged transgressions. Do any of these come from real job offers you’ve received?

I have a very champagne problem of getting all these job offers. And I’m so grateful to have job offers, and also, I think, having the work ethic or the willingness to earn, like, “OK, yes, get out there. Hustle!” This is what it’s about — you do a job and be of service and be pleasant. But then what happened in terms of when I got the job (as the “Crazy Target Lady” in a series of ads in 2010) for Target, I realized the job itself was really fun, but I couldn’t disconnect myself from what I was saying, which is basically encouraging people to buy enormous amounts of consumer goods that they don’t necessarily need or want.

The joke on the show was “Nobody says no.” Now, I’ve turned down and will continue to turn down commercial jobs, just because I know myself. Which is really a lot of (the reason) why commercials pay so much, is because there’s sort of a gag going on criticizing anything about the corporation. And any employee can tell you that about working for a corporation — you’re paid to be a part of the team. But now I don’t take those jobs because I know that it will affect me emotionally. I know I’ll start to feel bad if it isn’t something I believe in.

Your character makes this remark in the very first episode about “what a great late-in-life opportunity” her new show is for her — you’re 45, not old at all — along with some other jokes about not having kids at her age because it’s too dangerous. How does it feel finding all this success at this point in your life?

It feels great. There’s no pressure. I don’t feel that thing I felt when I was younger of like, “Oh, this is going to make me or break me,” or “This is the be all end all.” I think that’s one gift of getting older — you just keep going. There’s highs and lows, and there’s another day. It’s been really fun just to enjoy it and pay off our house and prepare for retirement in an “Abundant Now.” We’re doing a lot of affirmations in our family (laughs).

Your dog Bert is also a character on the show, which is funny because the first time I remember seeing you was during a bit on “Kroll Show,” where you also played a woman who was really, really into pugs. What is it about these little dogs that you’re so drawn to?

They’re super affectionate, pugs. Although those pugs on the show are professional, so they weren’t as affectionate because they were always working. But my unprofessional dogs at home are just so loving and so soft and don’t need any exercise, for the most part. It’s also a nice reflection of, you know, when you think, “What am I like?” And I hope I’m like this. I hope I’m slightly adorable and useless.