Lawrence Libations revisits an old summer standby this week, with a Middle Eastern twist on lemonade at Aladdin Cafe.

The addition of rose water — which itself has been marketed as a good-for-you “beauty drink” as of late in the Western world, apparently showing up in the aisles of upscale supermarkets and New York City juice bars, in addition to centuries of Middle Eastern culinary tradition — results in a very sweet, very odd flavor (in a good way) that’s difficult to describe. I guess “it tastes like rose petals” would be the appropriate answer.

Mixed with lemonade, it makes for an extremely invigorating (this stuff will wake you up if you're feeling sleepy) thirst-quencher. The Aladdin Café menu also promises saffron blossoms along with the rose water — we couldn’t find any blossoms in our drink, aside from a few flecks of the bright orange spice floating among the ice cubes. Still, pretty extravagant for a regular ol’ Monday afternoon in Lawrence. 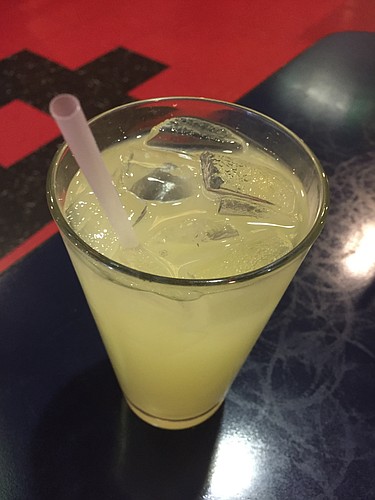 The hard stuff: no alcohol in this one

Other libations at this location: Notably, the Turkish coffee, if you’re looking to fully commit to the Middle Eastern/Mediterranean theme

— Drink up. Stay classy. Don’t forget to tip your bartender. And let us know if you want to suggest a libation for this feature — email jhlavacek@ljworld.com or Tweet her at Twitter.com/hlavacekjoanna. Cheers.