The community of Mexican railroad workers that sprang up 90 years ago in East Lawrence is long gone (the patch of small, brick homes was washed away in the flood of 1951), but its memory lives on through Hoyt, whose immigrant grandparents settled in La Yarda way back when, and the many Lawrencians who share her Mexican heritage.

“La Yarda was like one big family. These families would come together and have communal meals and do all sorts of things together.” At St. John, she says, “We’re still able to get together every summer and put on the fiesta.”

This summer’s fiesta, slated for 6 p.m. to 11:30 p.m. Friday and Saturday at St. John the Evangelist Catholic Church, promises the same authentic Mexican food, live music, dancing and family fun that have been mainstays at the well-attended church fundraiser since its inception 36 years ago.

More than 200, Hoyt included, make up this year’s efforts, says fiesta chairman Frank Lemus. Many claim Mexican descent (St. John still has a large Hispanic congregation, Hoyt notes, with Spanish-speaking Mass being offered every Sunday) while many others do not. Some volunteers are not even parishioners at St. John but enjoy helping out anyway, Lemus says.

Proceeds from the event, which annually generates about $35,000, go toward St. John Catholic School’s Spanish language program, maintenance projects at the church and a scholarship program for local Mexican-American students. 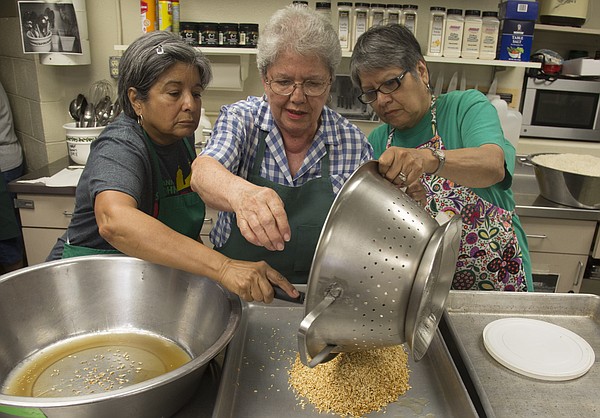 From left, Judy Romero, Bertha Bermudez and Val Howland spread some rice out to cool to be used to make sopa in preparation for this weekend’s annual St. John’s Mexican Fiesta. The fiesta will be held from 6-11:30 p.m. Friday and Saturday at St. John the Evangelist Catholic Church, 1234 Kentucky St. by Richard Gwin

Thousands — it’s hard to predict how many exactly, though some estimates in recent years have counted as many as 10,000 — are expected to attend this weekend’s fiesta, which this year is being promoted under the Free State Festival roster of events.

“For me, it’s seeing the people gather and have a good time,” Lemus says. “I always compare it to a big barbecue in our backyard at St. John.”

Among the attractions: carnival games and a bounce house for kids, the St. John’s Fiesta Dancers, and live music from Mariachi Girasol, Grupo Picante and more. And then there’s the food, with an estimated 800 tostadas, 2,000 tamales and 3,000 burritos being churned out in advance of the event by St. John volunteers.

Because of the labor involved, enchiladas will only be offered Saturday night, says Lemus, who advises folks to arrive earlier in the evening (food usually sells out by 10 p.m.) if they’re eyeing a specific dish.

Returning this year is the fiesta’s new-and-improved La Yarda display. Last year, shortly before the 2015 fiesta, the Douglas County Commission awarded St. John a $16,400 grant to refurbish the display, which includes photos and texts detailing the history of Mexican-American Lawrence families like Hoyt’s.

With any luck, her own children — they’re still very young — will lend a hand in future fiestas. For now, they’re just excited to revel in the fun of it, she says.

“It’s important for people, especially for me and my family and future generations, to just remember where they come from,” says Hoyt, who served as project manager on the La Yarda exhibit. “Lawrence is a very diverse place and this is just a piece of it. It’s important to recognize and remember it.”