Anywhere from 15,000 to 20,000 people flocked to Lawrence’s Free State Festival events, according to estimates from festival organizers, putting this year’s numbers roughly in the same range as 2015 figures.

The 2016 Free State Festival, which was held June 20 through June 25 in various venues across downtown Lawrence and the city’s Cultural Arts District, drew its biggest numbers at June 25’s free Public Enemy concert outside the Lawrence Arts Center. At final count, approximately 8,500 people attended the show, surpassing the crowd at last year’s free performance by George Clinton and Parliament Funkadelic by about 500. 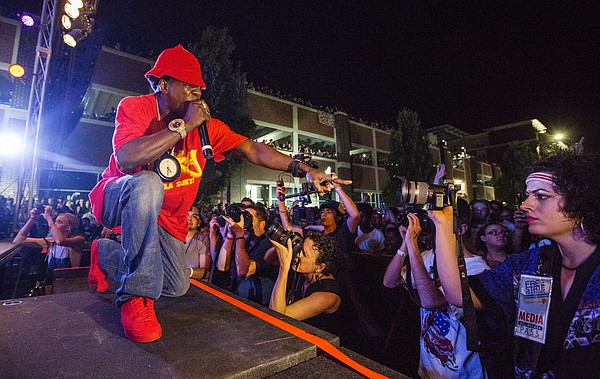 Public Enemy's Flavor Flav points out to the crowd during a free concert Saturday evening, June 25, 2016, as part of the Free State Festival. by John Young

“We were really excited to see so many people from out of town coming in for both Public Enemy and Kris Kristofferson,” Bishop said. “It really drew people from a wide swath surrounding the area.”

Fans traveled from as far away as Connecticut, Maryland and even Canada for the Grammy-winning country singer-songwriter’s June 22 concert, she noted. The sold-out concert filled Liberty Hall, where Kristofferson celebrated his 80th birthday the same night with a cake from downtown Lawrence’s Ladybird Diner.

Even free events, like the weeklong “The Art of Conversation” programming at the Watkins Museum of History, did surprisingly well, Bishop said. The talks aligned with this year’s festival theme of activism through art, each day dealing with contemporary topics such as gender and sexuality, health policy, race and law enforcement, and the politics of water.

“People were really engaged and enthusiastic,” Bishop said. “It was really nice to see residents connecting in that way and having great conversations about these important political, social and cultural issues.”

While the festival has focused on Kansas history and culture in the past, the 2017 and 2018 editions will ask “audiences to think about how the global and local connect,” as per a $50,000 grant from the National Endowment for Arts to “take the festival to an international level,” Bishop said.

The 2017 festival, which will most likely fall amid June’s Final Friday, will tentatively have a Mexican emphasis, with issues like immigration — and the growing number of immigrants arriving in Kansas each year — being especially timely now, Bishop said.

“We’re thinking about the ways in which Lawrence connects with Mexico, the ways in which Mexican culture manifests here in Lawrence, Kansas, and the really interesting art that’s being (created) in Mexico,” she said. Bishop also plans to include more educational outreach programs in 2017, ideally working with students at Centro Hispano to produce bilingual films.

This year’s festival initially received $60,000 from the City of Lawrence, falling short of the $100,000 requested by festival organizers, but later picked up an additional $7,375 from the city’s transient guest tax (that’s the 6 percent tax charged on all overnight hotel stays in Lawrence) grant program.

Bishop hopes this year’s high attendance, particularly of those visiting from outside Lawrence, will help convince potential funders of the festival’s financial viability. Just as important: “putting Lawrence on the map as a creative hub,” she said.

Sally Zogry, executive director of Downtown Lawrence Inc., said she had yet to see any detailed information on the 2016 festival’s impact on downtown businesses, but that the event consistently “does wonderful things” for the local economy.

“I would venture to guess people spent money downtown, whether it’s a bottle of water or an expensive meal or an outfit they’re buying for the event,” Zogry said. “It really does bring people down here who maybe don’t come downtown as often, if they’re living across town or in Eudora or Baldwin City or Topeka or even Kansas City.”