Off the Beaten Plate: Mexican chocolate beet torte at Merchants Pub and Plate

This one’s for all the parents out there, because trying to persuade a stubborn child — or adult, for that matter — to eat their vegetables is no easy task.

Take it from a reformed picky eater whose mother tried fruitlessly for years to trick her children into eating healthier, even going so far as substituting apple sauce and yogurt for sugar in desserts or folding whole-wheat flour into an angel food cake with disastrous results.

I wasn’t fooled then, nor was I fooled by Merchants Pub and Plate’s Mexican chocolate beet torte, this month’s Off the Beaten Plate selection. The texture, color and taste of these rich little cakes are all dead giveaways of the presence of vegetables, but — and perhaps this says something for the passing of years to mature one’s palate — in a good way. 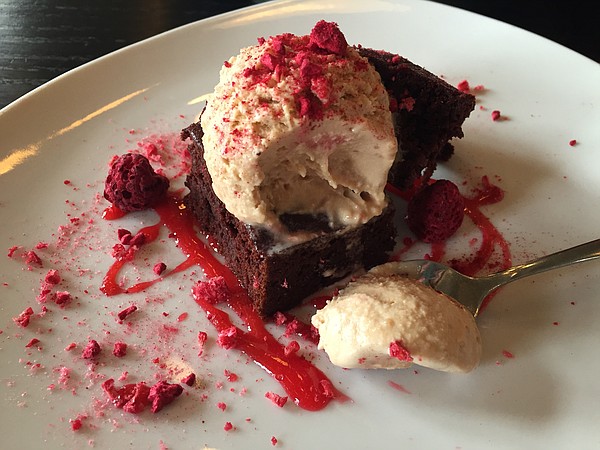 The torte (which is divvied up into two brownie-sized portions) is sweet, of course, but not too sweet. Mexican chocolate, richer and more bitter than its peers, seems a natural flavor pairing with beets, which lend Merchants’ dessert an earthy taste and dense, fibrous texture.

(Plus vitamin C, iron, magnesium and dietary fiber galore, among lots of good-for-you stuff. Mom, I hope you’re reading and appreciating this.)

Freeze-dried raspberries and a generous scoop of rich caramel ice cream round out the dish.

Where to get it: Merchants Pub and Plate, 746 Massachusetts St.

Try it with: A nice glass of red wine

Also on the menu: Gourmet takes on pub food, from the ever-popular Mac and Cheesemonger (Cavatelli pasta baked in a rich sauce of cheddar, Parmesan and Gruyere) and duck carnitas, to bison Bolognese and quail stuffed with chorizo and cornbread.

— Off The Beaten Plate highlights some of the more exotic, oddly named or inventively concocted dishes from local menus. Know of an offbeat item we should check out? Email reporter Joanna Hlavacek at jhlavacek@ljworld.com. Follow her at Twitter.com/hlavacekjoanna. Check monthly for more Off the Beaten Plate and Lawrence Libations.