Off the Beaten Plate: Tongue torta at Burrito King

On most trips to the drive-thru, no more than a few seconds pass between being handed my food and inhaling said food. (Because, really, what’s sadder than lukewarm french fries?)

Not so much with Tuesday’s jaunt to Burrito King, where I was the picture of ladylike restraint as I wearily received my tongue torta, still warm in its tin-foil blanket, and contemplated my fate as I very purposefully took the long, long way back to the newsroom.

If you’re squeamish (read: weirdly afraid of one part of the cow’s body that is regarded as a delicacy in some cultures but weirdly OK with, for whatever reason, other parts of the cow’s body) like me, you’ll probably need a moment to get yourself into the correct mental state before taking your first bite of tongue, otherwise known as lengua in Latin cooking. After centering yourself or tossing out a quick Hail Mary, you’ll find that the tongue isn’t so bad.

So, give the tongue torta a try. Just don’t look too closely under the sandwich bun, unless you’re cool with a few papillae. 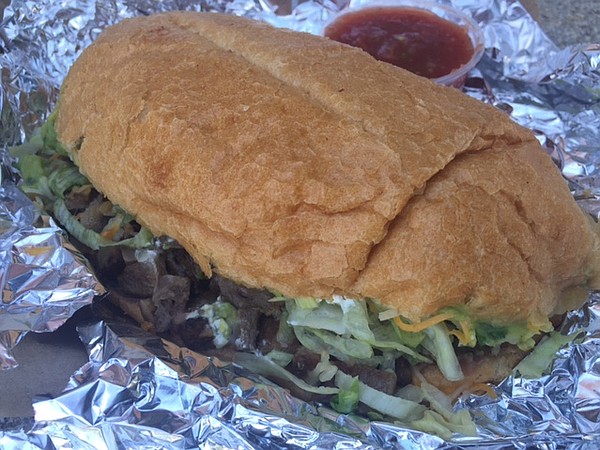 Where to get it: Burrito King, 900 Illinois St.

Try it with: An open mind and lots of napkins

Also on the menu: Other Mexican staples like tacos (which you can also order with tongue), quesadillas, nachos and burritos, naturally.

— Off The Beaten Plate highlights some of the more exotic, oddly named or inventively concocted dishes from local menus. Know of an offbeat item we should check out? Email reporter Joanna Hlavacek at jhlavacek@ljworld.com. Follow her at Twitter.com/hlavacekjoanna. Check monthly for more Off the Beaten Plate and Lawrence Libations.