Busker Fest to go on this weekend, rain or shine

With the recent rainy conditions — and chance of thunderstorms — expected to continue through the weekend, some Busker Fest faithful might be worried about the status of the popular outdoor event, slated for Friday through Sunday in downtown Lawrence.

Well, the show must go on, as they say. Or, as longtime festival organizer Richard Renner puts it, “We’re gonna do this thing one way or another.”

“The forecast keeps changing, and I hate that. If you can’t trust the weather, who(m) can you trust?” he jokes. “We’re going to be ready for the rain. If it starts up, we’ll stop to go have a beer, and when it stops, we’ll start up again.” 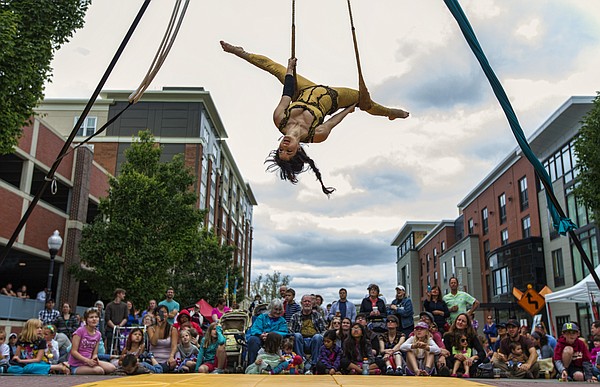 Mariel Reynolds, of Kansas City, Mo., hangs upside down, suspended above New Hampshire St. in front of the Lawrence Arts Center, as she performs with the aerial performance group Voler - Thieves of Flight while spectators watch as part of the annual Lawrence Busker Festival, Sunday, May 31, 2015. by John Young

As of Thursday afternoon, the National Weather Service predicted a 50-percent chance of showers and thunderstorms for the Lawrence area, with those odds dropping to 40 and 30 percent, respectively, each of the following nights.

Still, Renner’s optimistic about this year’s Lawrence Busker Fest. The ninth annual street-performer showcase is expected to attract anywhere from 15,000 to 20,000 spectators to downtown Lawrence over the Memorial Day weekend.

If you’re looking for something a little less inherently wacky, there’s always Poetry Alley in the breezeway adjacent to the Lawrence Antique Mall at 830 Massachusetts St. or the musicians’ pitch at 1020 Massachusetts St.

In the spirit of keeping Lawrence weird, Busker Fest is partnering for the second year with the popular Art Tougeau Parade. The annual display of wacky wheeled art (past creations have included Renner’s own ReCycle Cycle, a convertible-turned-movable-skatepark and even a flying saucer) begins Friday with the Final Friday Art Tougeau Street pARTy (attractions include live music, a few Busker Fest acts, food and drinks, children’s activities galore and, of course, the crazy rides themselves) from 5 to 10 p.m. in front of the Lawrence Arts Center, 940 New Hampshire St. 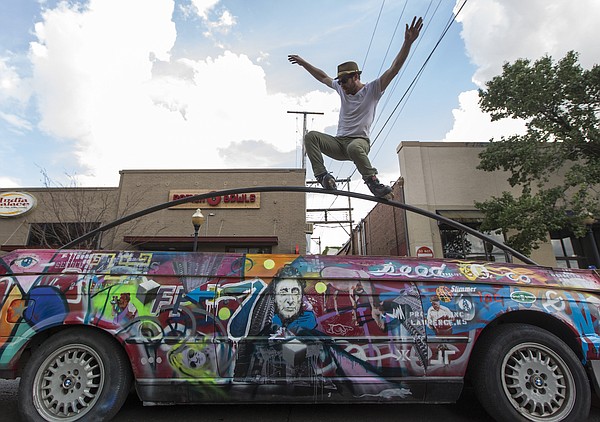 The Art Tougeau parade starts at noon Saturday in front of the Lawrence Arts Center before making a loop through downtown Lawrence.

Unlike last year, Renner’s sitting out on juggling both the Busker Fest and Art Tougeau, for which he passed the reigns to longtime parade participant and friend Pat Slimmer.

Busker Fest keeps him busy enough. And, with the 2017 Busker Fest being the 10th incarnation of the event, Renner’s already thinking about next year. He promises “something dramatic.”

“I just took it year by year,” Renner recalls. “After each year, I just sat down with the people I worked with and did a quick assessment. ‘Was it worth it?’ ‘Should we do it again?’ And every year, it’s been worth it.”

Check out www.lawrencebuskerfest.com for a complete schedule and map.