Posted by Joanna Hlavacek on July 29, 2016 at midnight

Autism is no joke to comedy troupe Asperger’s Are Us

Asperger’s Are Us has a few requests for audience members in advance of the Boston-based comedy troupe’s Aug. 5 performance at the Lawrence Arts Center.

First and foremost, don’t expect to see the guys – that would be Noah Britton, Jack Hanke, New Michael Ingemi and Ethan Finlan, all of whom are openly autistic — poking fun at their condition or using the show as a lofty platform for autism awareness.

And also: bring snacks. Canned goods, cereal, Pepsi and bananas are all on the guys’ wish list.

"‘Cause in RV parks, the only food available is whatever you can hunt from the slower people staying in the RV park,” jokes Britton, the self-described “old man” of the group. 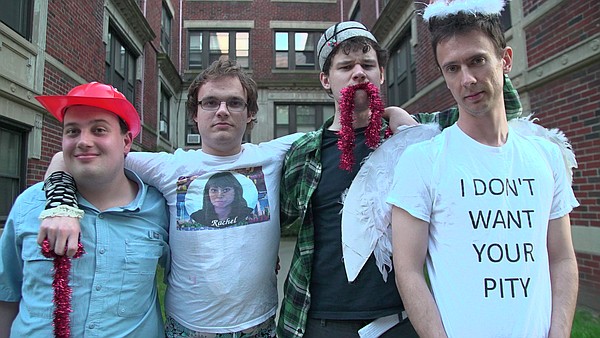 From left: Ethan Finlan, New Michael Ingemi, Jack Hanke and Noah Britton make up the comedy troupe Asperger's Are Us. The comedians, all of whom are openly autistic, will perform Aug. 5 at the Lawrence Arts Center, 940 New Hampshire St., at 7:30 p.m., followed up a Q-and-A session.

Britton has been tasked with RV maintenance — a daunting task, as the 30-year-old pre-used vehicle has taken to breaking down quite a few times already — during the troupe’s cross-country summer tour. He’s about a decade older than his fellow performers and friends, whom he met 11 years ago as a counselor at a summer camp (Hanke, Ingemi and Finlan were all campers) for kids with Asperger’s.

The age gap doesn’t matter much to the guys, who all share the same quirky, absurdist sense of humor (anticipate that, plus plenty of word play, at the Lawrence show) and a disorder that so often makes socializing and communicating a challenge.

“When I met them, I desperately needed to meet other Aspies. I hadn’t known about my own diagnosis long, and I was like, ‘I need to find somewhere where I can find my own people,’” recalls Britton. “You know, you spend your whole life (having Asperger’s) and are like, ‘What? I’ve never even met anyone who speaks the same language as me,’ and then you do, and it doesn’t even matter if they’re 12. You’re so psyched.”

Since 2010, the friends (aside from Britton, they’re all in their twenties and in college, though academics have been put on hold for the moment) have performed as Asperger’s Are Us, though this summer’s tour is their biggest foray into the national comedy scene yet.

Their biggest break may arrive in the form of a documentary, also called “Asperger’s Are Us,” executive produced by Mark Duplass. The film, which debuted to a warm reception at the South By Southwest festival in Austin earlier this year, is slated to hit Netflix in the fall.

Growing up, Hanke used humor as a “shield” in social situations. It was his way of “making people like me” and finding likeminded friends – a hobby, he says, that has now become a career, oddly enough.

“In the small scale, it feels normal. We’re used to touring by now, somewhat,” Hanke says of the group’s recent successes. “But I guess in the big sense, I still have a hard time believing that this is our life right now. It’s utterly unlike anything I expected to be doing at 23.”

At the moment, that entails anything from spelunking in Ohio to gigging at such prestigious venues as the John F. Kennedy Center for the Performing Arts in Washington, D.C. That’s life on the road, and so far, audiences have been receptive to the Asperger’s Are Us brand of humor.

Mainly, the guys are there to make each other laugh — their influences include Monty Python, Andy Kaufman and Steven Wright — but if audiences find it funny too, well, the more the merrier. A one-on-one conversation, Hanke explains, is harder to navigate for a person with Asperger’s than performing to an impersonal auditorium packed with row after row of anonymous faces.

As much as the group prefers to shy away from an ambassador role, they don’t mind talking about Asperger’s with those who are genuinely curious. After every show, the troupe does a Q-and-A session with the audience, fielding questions from parents and teachers and others looking to better understand autism.

“Honestly, if someone wants to hire us to do some kind of educational lecture, we will, but we’re very happy to just be funny on stage and appeal to people who have similar senses of humor,” Britton says, “And that’s really, I think, what every comedian wants.”

Catch Asperger's Are Us at 7:30 p.m. Aug. 5 at the Lawrence Arts Center, 940 New Hampshire St. Tickets cost $10, and can be purchased at the Arts Center ticket office or at www.lawrenceartscenter.org.