Posts tagged with Off The Beaten Plate

Posted by Joanna Hlavacek on October 28, 2015 at midnight

Off the Beaten Plate: Chicken and kimchi tacos at Ramen Bowls 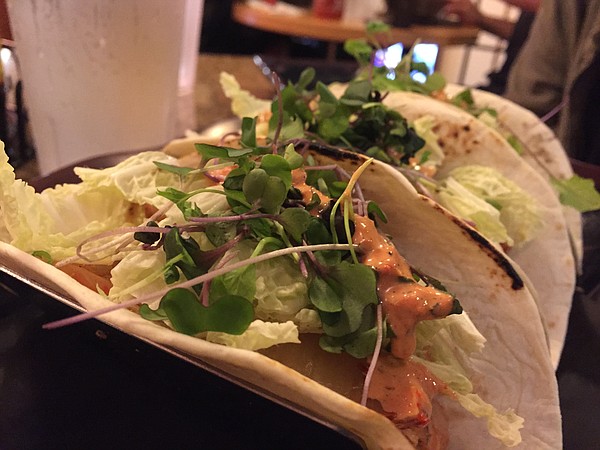 East meets West in these chicken and kimchi tacos, a culinary mashup from Ramen Bowls that combines tangy, vinegar-y kimchi and tender chunks of shredded chicken.

It’s all incredibly satisfying (technically, this one’s an appetizer, but could easily double as a meal) yet manages to somehow make the taco-eating experience weigh a little less heavily on one’s conscience. (For those not in the know, kimchi is a sort of Korean sauerkraut.)

Perhaps it’s the absence of fattening south-of-the-border ingredients like cheese and refried beans, or maybe it’s the delicate sprinkling of Napa cabbage and microgreens adorning each taco that gives the dish a distinctly fresh, good-for-you appearance.

Yet, much like its Mexican counterparts, the chicken and kimchi taco is a little spicy. (Not that there’s anything wrong with that.)

It’s probably due in part to Ramen Bowls’ Sriracha aioli — the bright-orange sauce has the tendency of trickling down your wrist and onto your sweater, so keep some napkins around.

What you’ll pay: $7 for three tacos

Try it with: Ramen Bowls’ mango chiller (the drink comprises mango puree, Japanese green tea and a splash of soda) to alleviate the tacos’ heat

Also on the menu: About a dozen different types of ramen, plus some rice dishes, a few desserts and sake galore.

Posted by Joanna Hlavacek on October 21, 2015 at midnight

Off the Beaten Plate: Kunafa at Aladdin Cafe 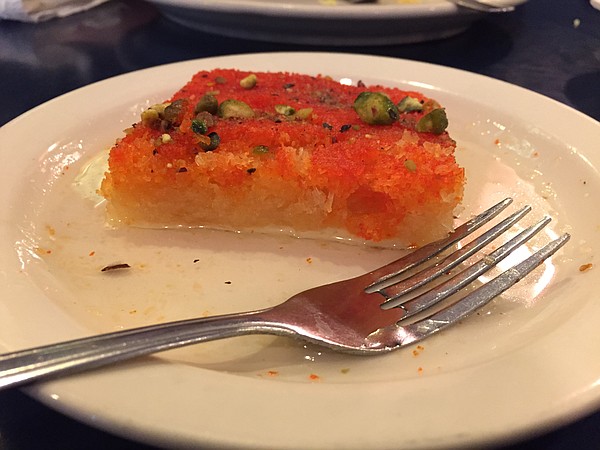 This exotic dessert (check out that Day-Glo color, man) has been referred to as the Middle East’s answer to the cheese Danish.

Sure, Aladdin Café’s kunafa starts with a thin layer of sweet Arabian cheese that has the appearance and viscosity of mozzarella, but the similarities pretty much end there — at least, from what my unsophisticated palette could determine.

The cheese portion is topped with a thick layer of shredded phyllo dough, sprinkled with crushed pistachios and then doused in a mysteriously orange sweet sauce. Traditionally, this syrup is flavored with either rose water or orange-blossom water.

As for what gives the kunafa its vibrant hue, our waitress guessed saffron, but from a bit of online sleuthing, we’re betting on orange food coloring.

Unlike its Greek cousin baklava, the kunafa’s phyllo dough loses its crunch (probably from absorbing all that syrup) and takes on the consistency of a something similar to a rice pudding — or perhaps Shredded Wheat after sitting awhile in the bowl.

Where to get it: Aladdin Cafe, 1021 Massachusetts St.

Try it with: A cup of cardamom-laced Turkish coffee, $2.99

Also on the menu: Lots of Middle Eastern/Mediterranean fare, from classic appetizers such as hummus and baba ghanouj, to soups, salads, sandwiches, shish kabobs and more.

Posted by Joanna Hlavacek on October 14, 2015 at midnight

Off the Beaten Plate — Salvadoreña Enchiladas at La Parrilla 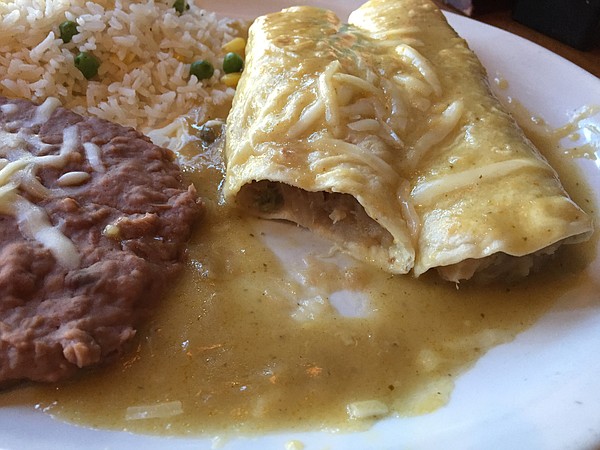 Before getting down to brass tacks here, let’s settle the difference between “yucca” and “yuca,” only one of which made its way into my stomach this week at La Parrilla.

Yucca, apparently, is the large, ornamental plant with white flowers and spiky leaves common in the southwestern U.S. and parts of Mexico. Not to be confused with the starchy, edible root of the cassava plant, which also, it turns out, is also a main ingredient in tapioca pudding. Who knew, right?

(The simultaneous joys and dangers of Wikipedia are not to be understated. Take it from the kid who used to spend hours reading her parents’ World Book encyclopedias just for fun.)

Anyhow, the main thing you need to know here is that yuca, not yucca, is similar to the potato. It’s also a key ingredient Latin American cooking, including Salvadoran.

At La Parrilla, the two tubers (say that 10 times fast) are mashed, integrated with peas and folded into soft flour tortillas. They’re also topped with Monterey Jack cheese and salsa verde, though on the day of our visit, the sauce in question leaned more toward the coloring and taste of a brown gravy.

Don’t let the “exotic ingredient” factor deter you. This is comfort food at its most basic — warm, mushy and loaded with carbs.

Where to get it: La Parrilla, 724 Massachusetts St.

Try it with: This hearty dish already comes with beans and rice. Wash it down with a glass of La Parrilla’s popular Brazilian lemonade.

Also on the menu: Plenty of Latin American favorites such as tacos, quesadillas, rice bowls and chile relleno, among others. And, if you’re a fan of yuca, there’s also yuca frita — fried chunks of the tuber served with spicy aioli.

Posted by Joanna Hlavacek on September 30, 2015 at midnight

Off the Beaten Plate: Bulgogi beef at Oriental Bistro 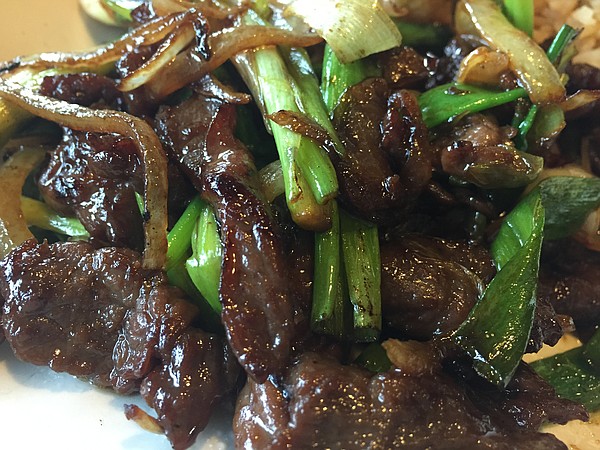 Literally meaning “fire meat” in Korean (sounds fairly Neanderthalian, no?), this dish consists of thinly sliced beef that’s been marinated (traditionally in a mixture of soy sauce, sesame oil, garlic and other ingredients) until tender and then grilled.

The scallions — equally tender and coated in a savory sauce — are pretty to look at, and tasty, too.

What you'll pay: $8.99, or $6.99 for a lunch special with your choice of rice (steamed or fried) and egg roll or crab rangoon, like we did. Our plate also included a smattering of tempura veggies as well as a choice between side salad or various soups — we opted for the miso.

Try it with: You won't be hurting for food with the combo option, but this meaty dish might pair well with a nice order of spring rolls or lettuce wraps to lighten things up.

Also on the menu: This place is basically a "greatest hits" collection of the Asian culinary pantheon, boasting everything from Chinese-American classics (moo goo gai pan and the like) to Thai, Korean and Japanese, which probably has the biggest presence on the menu. Oriental Bistro offers a truly dizzying selection of sushi (as in, dozens and dozens of inventive creations like the Kansas roll or the BMW roll) as well as sashimi, noodle soups and bento boxes.