Posted by Joanna Hlavacek on June 17, 2016 at midnight

Emily Laughlin was only 12 when she first learned of Van Go Inc., the social service agency that provides arts-based job training to at-risk teens and young adults in Douglas County. She wasn’t yet old enough to take part in the program, but Laughlin, now 19, remembers the “beautiful” bench Van Go apprentice artists created in memory of her late mother, who had recently died from breast cancer.

She’s not sure if the bench — it was adorned with a pink ribbon, the symbol for breast cancer awareness — remains at the cancer ward of Lawrence Memorial Hospital, where it originally sat. Nearly a decade later, though, Laughlin is sure of herself and the career path she’s embarking on with the help of Van Go.

“I found that I really enjoy it and that I’m good at it,” the aspiring art therapist says of metalsmithing, one of the many previously untapped talents she’s discovered in her time at Van Go. “It’s also made me realize what I want to give to the world and the future.”

Laughlin is one of many young artists whose work will be auctioned at Saturday’s 13th annual What Floats Your Boat. Slated for 7 to 11 p.m. at Clinton Lake Marina, the event is Van Go’s biggest fundraiser of the year, with proceeds — the goal is $80,000 this time around — going toward job-training programs for youths as well as operational costs for “keeping the lights on, the doors open and the phones on,” says Van Go development director Eliza Nichols.

“It’s not the most glamorous thing to fundraise for, but somebody has to do it,” she says. “It’s fairly easy to find funders to pay for art supplies or food, but the building itself — we have to be creative in our approach to that.” 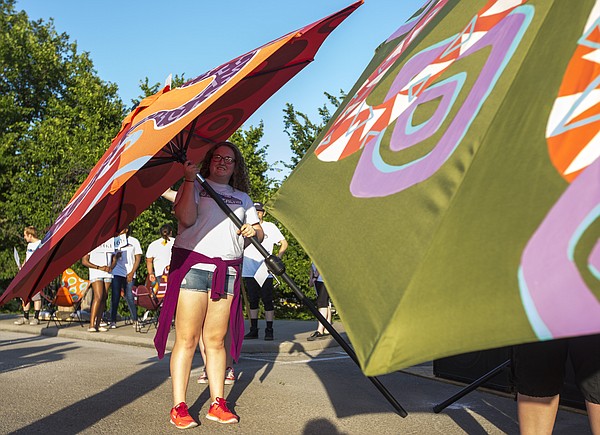 Maya Frazier, 15, of Lawrence, holds up a large patio umbrella as she shows it to the crowd gathered during Van Go's annual What Floats Your Boat fundraiser Saturday, June 20, 2015, at the Clinton Lake State Park marina. by John Young

This year’s “approach” includes about a dozen pieces crafted by Van Go’s apprentice artists, who range in age from 14 to 24. As in previous iterations of the event, much of Saturday’s auction will be devoted to upcycled outdoor furniture painted in “retro” shades like turquoise, lime green and bright orange. Local artists Dave VanHee, Kristin Moreland and Stacey Lamb — along with Van Go apprentice artist Jordan Wittbrod are also pitching in with their colorful “art bikes,” another from years past.

The event — which will treat partygoers to dinner by Ingredient and McGonigle’s, live jazz by Blueprint and dancing under the stars with DJ Johnny Quest — will also celebrate the successful completion of Van Go’s two-year, $750,000 endowment campaign. The agency recently surpassed its goal with an extra $15,000 in tow.

The money will go toward a safety net in case of emergency or sudden grant cuts, says Nichols, to ensure opportunities for young artists like Laughlin for years to come.

“I didn’t believe I could,” she says of imagining an artistic career for herself back in high school. “They’ve boosted my confidence and made it seem possible for me to do that.”

Posted by Joanna Hlavacek on November 25, 2015 at midnight 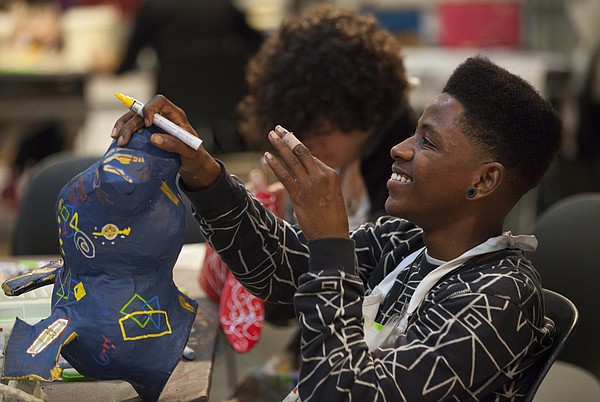 The holidays are going to the dogs (and other members of the animal kingdom) this weekend, when Van Go Inc. kicks off its month-long Adornment Holiday Art Sale and Show from 7 to 9 p.m. Saturday.

The Van Go headquarters at 715 New Jersey St. will be transformed into a gallery — complete with twinkling lights, live music and original artwork filling almost every inch of the space — for the occasion, which raises funds for Van Go’s apprentice artist program.

About 30 young artists aged 14 to 24 are represented at the critter-themed show, which boasts everything from pastel animal portraits, glass plates and lit marquee signs to laser-cut jewelry, animal beds made out of suitcases and beastly creations called “Van-imals” that are affixed to wall mounts in the tradition of taxidermied game.

“It’s all one-of-a-kind, not mass-produced work,” says Lynne Green, Van Go executive director. “Not only are you able to buy a beautiful piece of artwork made by our kids, you can also support a nonprofit. So, it feels really good to be a part of it.”

The price range this year runs from two-for-$5 magnets to bone-shaped marquee signs (for the dog lover in your life) at $150 apiece, says Green, who’s hoping to raise about $25,000 total.

That money, she notes, makes a major difference for Van Go — “we can buy snacks for the kids, we can keep the lights on, we can just operate,” Green says.

At 7 p.m. sharp on opening night, a bell is rung to signify the start of the sale and a mad dash ensues to snatch up artwork. The event also includes wine, a treat and free gift wrap, but the main event — at least for Green and her staff — is the recognition ceremony, where all 26 of the apprentice artists are introduced and a handful are asked to speak.

“It’s quite an emotional experience for those adults who are here to listen, because the kiddos really speak from their hearts about what being in Van Go has meant to them and how it has changed their lives, in some cases,” Green says. “That’s the point at which people ‘get it’ and understand what Van Go’s really about.”

Any pieces that go unsold Saturday night will still be available at Van Go 10 a.m. to 5 p.m. Monday through Friday and 1 to 5 p.m. on the weekends until Dec. 24.