Frank's North Star Tavern, at 508 Locust Street in North Lawrence, has a really active social media presence and they like to talk about movies. That's how I first found out about the relatively new bar. I had just interviewed John Lithgow for his recent Lied Center appearance and I remarked on Facebook and Twitter about how cool it was that I got to ask him about the bizarre 80s cult film “The Adventures of Buckaroo Banzai Across the 8th Dimension,” in which he played the crazed Dr. Emilio Lizardo/Lord John Whorfin.

I immediately got a reply from the FNST Twitter account asking if I would come see that movie if they showed it at the bar on a Monday night. My response was something like: "Hell yes. Do you want me bring the DVD?"

Unfortunately, that Monday fell on a week when I was out of town, so I had to miss both Lithgow (who by the way is the nicest guy ever) and "Buckaroo Banzai." ARGH! (I never did find out how that Monday Movie Night went over and they never mentioned...hmmm.)

I'm always curious what movies people want to show and what movies people want to watch in a bar, so I decided to ask FNST owner Frank Dorsey himself. Last week, they showed "9 to 5" but throughout the month of October, Frank's is going the horror route with their spectacularly named SPOOKY SPOOKTACULAR SPOOKTOBER lineup. Here's what Frank had to say about crowds that scream for blood, Fred Astaire's drunk dancing, and Andy Griffith:

*Eric: What made you decide to start Monday Movie nights at Frank's?*

Frank: It was purely practical. We had a really slow Monday night and I asked Jen, the Monday night bartender, what we could do. We came up with showing movies.

*Eric: What are the criteria for a great Monday movie?*

Frank: It seems like the worse they are, the more people show up. The most people came to "Troll 2." ("Troll 2" is uniquely entertaining, the best 'worst movie' ever! - Eric.) Also really popular were "Road House," and R. Kelly's "Trapped in the Closet." I had never seen any of these before. They are all spectacularly bad, each in their own special way.

The Best of Troll 2 by iceduck64

*Eric: Tell me about your October SPOOKY SPOOKTACULAR SPOOKTOBER lineup and why you chose it.*

Frank: We did some Facebook polling on our page, and we also just picked movies we love. My wife Sarah loves scary/creepy movies. She picked "Rosemary's Baby," which also won the Facebook poll. I think "Freddy vs. Jason" is hilarious. "The Texas Chainsaw Massacre" is a classic, but I've actually never seen it, so I'm excited to check it out. And you have to have "The Shining" in there. It's just such a great goddamn movie. So, I guess it's just a mix of The Good, The Bad, and The Ugly, if you will. Ooh...that might be a good future Monday Movie. 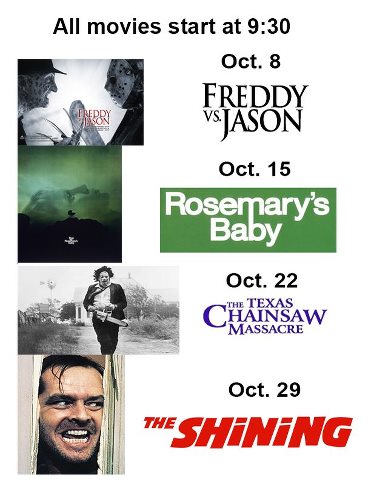 *Eric: What do you display the movie on and where does everyone sit? What makes watching a movie at Frank's different?*

Frank: Right now, we have a big 60-inch TV. It works pretty well. We rearrange all the couches and chairs, sort of arena-style. We put a few tables in the back. It's a really nice, loungey atmosphere. It's totally informal. With really bad movies, there's a lot of fun heckling. Maggie Allen from Liberty Hall hooks us up with a lot of the movies. She's even ordered some Blu-Ray discs for us to use, that they then put in circulation at the video store. So you'll be glad to know that you can now rent a Blu-Ray copy of "Over the Top" from Liberty Hall.

*Eric: What are some of the movies you've shown so far? Which ones have had great reactions and which ones not so much?*

Frank: I try to pick ones that are kind of well known. If they're really bad, and really well known for being bad, those get the best reactions. Maybe my favorite part of any of the Monday Movie Nights was in "Road House," when Dalton, played by Patrick Swayze, finally has the main bad guy, Brad Wesley (Ben Gazarra!) down on the ground during the final confrontation. The audience was literally screaming for blood. They really wanted Swayze to rip old Ben Gazarra's throat out. I was doubled over with laughter.

One of the less successful, maybe because it might be less well known, was "Kung Fu Hustle." I love this movie, but I don't think enough people have heard of it. Or maybe I didn't promote it enough. It's hard to say.

*Eric: What are some of your favorite films? Is there a filmmaker or genre you gravitate towards?*

My tastes are really broad. My favorites tend to run pretty parallel to a lot of top 10 lists. I love Kubrick and Kurosawa. When I worked at Liberty Hall Video, I was able to explore a lot of somewhat lesser known classics. "A Face in the Crowd" starring Andy Griffith is amazing. I've heard that he had psychological issues after filming that movie.

I also truly adore "Kung Fu Hustle." I like a lot of Kung Fu movies. Especially ones where they don't edit the shit out of the fight scenes with cuts every two seconds. I like it when they let the camera roll and just capture amazing, balletic fight sequences.

One of the "Drunken Master" movies - I think it's (the sequel) - has some truly stellar sequences. It's just incredibly well choreographed, like a Fred Astaire dance sequence. I always mentally compare the drunken fight scenes in those movies with the amazing drunk-dancing scene in "Holiday Inn."

I hope they're paying the required royalties for showing movies in public. There are copyright laws that apply in these situations.

I believe copyright laws are applicable when a movie is duplicated and/or a fee is charged to watch it. Neither applies in this situation.

Public performance requires a license. We had to license the music we play on our phone system for folks on hold.

This sounds alot better place to go than the last owner who had a bar, which was a arm pit of a place and he made fun of his patron's heritage which his whole family thought they were better than them. Although, he and his brothers had alot of offspring come from those patron's and sure made there living off them. Now , I think he owns the slowrider (sleazyrider) in north lawrence. His family owns the la tropicana which they would use the salsa that were ordered buy there customers and reused the uneaten portion and given the old salsa to other customers, they have been doing this for years. SO, we thank JESSE DEL CAMPO JR. and brothers!!!!!!