The setting: An abandoned airport in Montreal, November 2011

The players: Talented movie actors and artists, professional extras ... and me.

It's time once again to wander aimlessly. Or to look as if I'm wandering aimlessly, at least — to wander with the specific purpose of not calling attention to myself. That's what it's really all about.

I stumble forward, mouth open, skin pale, and eyes staring ahead but not really looking at anything — until I run into a wall.

“Cut!” yells somebody on set. ”OK — who walked right in front of the camera at the end?”

Oh, crap, I ruined the shot.

“That was great. Do it again. Jonathan liked it. Make sure you start at the same mark for the next take.”

My single day as a “zombie background corpse artist” was in high gear, and I had just hit the extra equivalent of a home run. “Jonathan” is director Jonathan Levine ("50/50"), the man who graciously allowed me and eight other members of the press to wander around the background of a couple of shots in the name of garnering publicity for "Warm Bodies," which opens nationwide today.

I was happy to oblige. If you’re going to do a set visit on a film, what better way to do it than to sit through hours of makeup, hair and costuming to come out looking like you haven’t slept in weeks and are suffering the worst hangover since, well, "The Hangover Part II"?

In the downtime between shots, I interviewed star Nicholas Hoult, who plays a zombie that bites the boyfriend of Teresa Palmer and then starts to develop a connection with her through his memories. In other words, THIS MOVIE HAS SENTIENT, TALKING ZOMBIES. That’s kind of a big deal.

Ms. Palmer and Rob Corddry were also kind enough to oblige me with quick interviews, and so was Levine. I got the impression that Levine appreciated the challenge of adapting a book that rewrites the zombie apocalypse in the spirit of a "Romeo and Juliet"-style doomed romance. Like "Twilight," there is a huge teenage alienation parallel going on in "Warm Bodies," but unlike "Twilight," this film is clever and self-aware. Hoult's character, named R (he can't remember the rest of his name, just the first letter), has a running narration throughout the film that constantly pokes fun at his situation, even though the romance is sincere.

For me, it was the little things that made it worthwhile: Being able to watch how a set full of zombie extras and an airport strewn with trash transformed into an amazing crane shot through the playback screens of Levine and his cinematographer Javier Aguirresarobe ("The Road," "Talk to Her," "The Others") was a definite highlight. 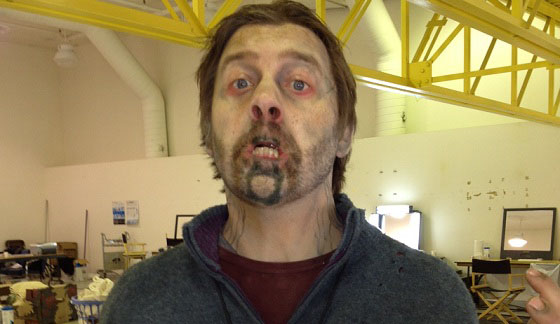 After going through makeup and hair, I was ready to walk like a zombie. by Eric Melin

I was also surprised by the lack of formal zombie training. Minutes before the cameras rolled, a crew member coached us. After volunteering my zombie walk, he said “Almost — too stiff!” and explained that we are to stare in an undead way but not have too many big, herky-jerky moves. Arms up too far, by the way, is a big no-no. The weird thing is, after hours of watching other extras do it right, it just kind of happens: less showy, more plain staring straightforward.

Levine has a firm grasp on the idea of fusing a traditional zombie flick with some new rules and a forbidden romance (based on the book by Isaac Marion, who the fictional airport is named after). "Warm Bodies" is a little light on plot-driven conflict and heavy on pop songs, but it uses them in an interesting way, and it was cool to see Levine scoring the movie as he shot it. On one particular playback, he was syncing a song up with the shot and comparing it with the other ones in the monitor, while the camera crew was setting up for the next shot.

So much for my "home run," though. Out of the two shots I was in front of the camera for, I could only identify one that survived in the final picture, and that scene cut to another before the camera even got to where I was.

Oh well. This zombie background artist will "live" to walk another day.