The new Disney movie "Oz the Great and Powerful" may be based on the works of L. Frank Baum, but it's an entirely new adventure scripted specifically for the big screen. Written by Hollywood schlockster Mitchell Kapner and touched up considerably by playwright David Lindsay-Abaire, the story is pretty standard stuff about a selfish man who learns to care about other people. But it's the energetic, loopy direction of Sam Raimi and the old-fashioned movie-star charm of Michelle Williams and Rachel Weisz that make this "Oz" not quite great and sometimes powerful.

Back in the 1980s, Raimi burst on the B-movie scene with the R-rated horror movie "Evil Dead" and its superior sequel "Evil Dead 2," in which he pioneered low-budget creativity by strapping cameras to homemade rigs that would travel over bumpy terrain and running the film at high speeds, among other things. He took his love for B-movies to the mainstream with the first "Spider-Man" trilogy, and his camera movement was still a major attraction, giving us a bird's-eye view of Spidey as he swings all over New York.

With those films, Raimi put the audience in the middle of the action, something he does many times during the family-friendly, PG-rated "Oz the Great and Powerful." Usually I decry the gimmicky use of 3-D in a movie, but in "Oz," Raimi has a way of celebrating 3-D's cheap thrills with child-like glee. As Kansas huckster Oscar Diggs (James Franco) goes over a waterfall, the audience is right there with him, feeling our stomachs drop. When shards of houses pierce the walls of his hot-air balloon in the middle of a tornado, our hands clutch the arm rests.

In addition to the roller-coaster-ride feeling, Raimi instills a real sense of wonder and awe with his version of the Land of Oz, a multi-colored digital playground with some of the best visual effects you're likely to see all year. There's an impressive amount of 3-D depth to the landscapes and creative use of the film's dual aspect ratio in tandem with stereoscopic vision. Last week I celebrated the work of the artists who created the detailed CGI giants from the otherwise mundane "Jack the Giant Slayer," but the fully realized porcelain girl from "Oz" is a whole different kind of amazing. Wow.

On the flipside of the coin, there are the performances of James Franco and Mila Kunis. Since "Oz" is functioning on a mythical fairy-tale level, there is a certain amount of otherworldliness and bigness that actors must bring to their roles to fit in with the larger-than-life setting. Franco basically plays James Franco, 21st century actor and movie star, rather than actually embodying the character of Diggs. He grows into the part a little by the end, but his modern, laid-back take on the material is at odds with the earnest tone of the film. Kunis is perfectly cast as a doe-eyed innocent with perfect skin, but once the role requires her to stretch, she really isn't up to the task.

Michelle Williams, however, plays the witch Glinda as if the role were written for her. She's all sincerity and motherly instincts, wrapping those around her in a warm glow. And yes, this is accomplished by Williams herself, all without the help of visual effects, Rachel Weisz is also playing an archetype, but she adds a surprising amount of depth to her underwritten role as one of the script's many witches. 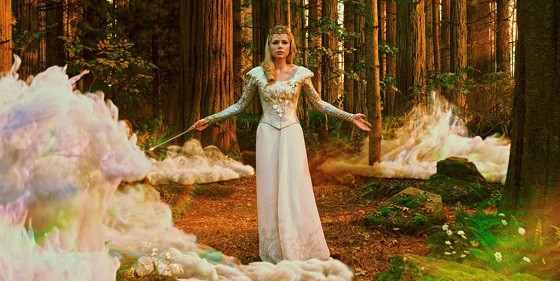 Michelle Williams in "Oz the Great and Powerful" by Eric Melin

Overall, "Oz the Great and Powerful" has the "wow" factor that big, Hollywood event movies demand. Raimi was the right person to elevate some pretty standard material, though Franco and Kunis may not have been the right people for the job. Although the film drags a little in its third quarter, it's a harmless and fun tribute to the 1939 classic "The Wizard of Oz," which like this one, mixed some darkness into its magical potion.

The free screening of Dave Grohl's documentary "Sound City" at Liberty Hall was moved to this Monday because of a snowstorm. Read all about it and watch the trailer in last week's column.

Friday night at the Alamo Drafthouse in Kansas City, another rock doc will make a one-night stand when "Don’t Stop Believin’: Everyman’s Journey" shows at 8 p.m. The subject matter is irresistible — an underdog tale about Arnel Pineda, a man from the Philippines who is plucked from obscurity to be the lead singer of legendary classic-rock band Journey after the band watched videos of him singing their songs on YouTube.

The film is mostly surface-value kicks, relaying the basic parts of the story (poor guy battling drug and alcohol addiction suddenly makes it big) without being particularly probing or revealing too many shades of gray. Still, seeing the reaction of the Filipino community and how they rally behind the band is interesting, as is the way the members of the band treat Pineda — with as much respect and admiration as one can have for an employee.

Also showing late nights this weekend at the Drafthouse and the Screenland Armour in Kansas City is the sick and twisted horror anthology "The ABCs of Death." This indie film tasked 26 different international directors with making an ultra-short film that corresponds to each letter of the alphabet and explores a different way to die. It is not for the faint of heart, and each short differs wildly in tone and content, so be forewarned. The film is showing at 9 p.m. Friday and Saturday.