Alan Moore and Dave Gibbons’ groundbreaking 1987 book “Watchmen” was the only graphic novel to appear on Time’s 2005 “All-Time Greatest Novels” list. It pushed the medium of visual storytelling in book format, and turned the superhero myth on its ear.

Director Zack Snyder’s 2009 movie adaptation of “Watchmen” was visually stunning, with incredible production design and costuming that matched the feel of the book and spanned a 50-year span of alternate 20th century history.

Unfortunately, Snyder’s fetish for extreme violence and his obsessive need to construct slo-mo action scenes that showcase superhuman abilities (he had previously directed “300”) was antithetical to the entire point of the story. You see, with one exception, there are no “superheroes” in “Watchmen” — they are masked vigilantes with zero superhuman abilities.

So it was with a certain amount of excitement that I viewed the 2014 fanedit revision “Watchmen: Midnight,” put together by Kansas University doctoral candidate Joshua Wille. 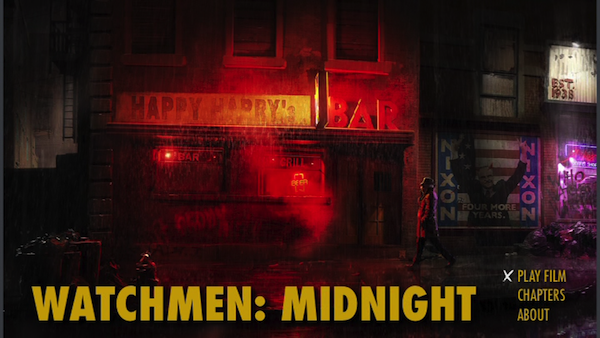 “Zack Snyder’s “Watchmen” was commercially released in three versions, but “Watchmen: Midnight” is an editing experiment to see how much further it could go,” Wille says. “Re-editing [the film] with a closer eye to the original comics has been very rewarding. It provided a more intimate experience with the "Watchmen" text because I have taken it apart and reassembled it with my own hands, so to speak.”

Wille has attended KU since the fall of 2009, pursuing his Ph.D. in film and media studies, and his dissertation will be on the growing subculture of fanediting. An early version of “Watchmen: Midnight” has already won numerous awards and has screened at academic conferences and fan conventions from Los Angeles to Hamburg, Germany.

“Fanediting has been around for a long time, but there has been a surge in activity since the popularization of more affordable desktop video editing software and large capacity hard drives,” Wille says. “This particular wave of fanediting gained momentum because of “The Phantom Edit,” a popular fanedit based on “Star Wars Episode I: The Phantom Menace” that first appeared in the early 2000s. Film revisionism itself has long history, and many celebrated filmmakers have revisited their work and created new versions.”

George Lucas himself is no stranger to this, having updated the original “Star Wars” trilogy in 1997 to include — in the first movie alone — such controversial scenes as a Greedo shooting first and a CGI Jabba the Hutt. His filmmaking pal Steven Spielberg reissued a 20th anniversary version of “E.T. The Extra-Terrestrial” that enhanced animatronic close-ups of E.T. with CGI and replaced the guns of federal agents with walkie-talkies. Ten years later, he reversed that decision, restoring the original version of the movie on Blu-ray and DVD.

Using supplemental sources such as outtakes, DVD extra features, and a motion comic version of the movie, Wille has restructured the film’s narrative to more closely resemble the novel. He also added sound effects, music, and titles, in addition to shuffling the timeline and lightening the color palette. In keeping with the fanedit ethos that movies aren’t fixed, but rather dynamic and evolving texts, able to be re-interpreted as time goes by, he has updated “Watchmen: Midnight” again just last month.

Unlike Lucas or Spielberg, however, fan editors don’t have access to the original production elements, so they must reverse engineer their cuts from video and audio that is already fully mixed. With 5.1 audio mixes, fan editors can sometimes extract separate audio channels, but the new “Watchmen: Midnight” updates the original stereo mix that Wille created the first time out when he was still inexperienced, which was even more challenging.

“When I removed a song, I also lost any other sounds on the track and I had to rebuild the audio from scratch,” he says. “For example, the scene in which Rorschach and Nite Owl II break into the Antarctic compound originally featured '(All) Along the Watchtower' by Jimi Hendrix. In my version, the song ends before that scene. I reconstructed the audio, including the sounds of the cutting torch, the door sounds and the wind.”

“Watchmen: Midnight” is a long 215 minutes. Perhaps it would play more cohesively as a three-episode miniseries, but I can certainly attest to one thing: Wille’s version feels like “Watchmen” the graphic novel to me. It’s deeper. It resonates. The tone is right. People often say that certain books feel like a movie when they read them, but they don’t understand how tough it is to adapt a completely different medium.

“I started this project knowing that I couldn’t make the film into a perfect translation of the comics, and as I reworked the film with the comic pages next to me, the differences between comics and film became more clear.”

“Watchmen: Midnight” may not be approved by its authors, who haven’t seen it, but it is as close to Moore and Gibbons’ work as anyone is ever likely to get.

"Watchmen: Midnight" can be downloaded via fanedit.info.