Boy to man: 'Boyhood' captures 12 years in 2 and a half hours

Now playing at Liberty Hall, “Boyhood” is the challenging new movie from writer/director Richard Linklater, and it follows 12 years of the life of a boy named Mason, who is first seen at age 6. Ellar Coltrane, who plays Mason, is the centerpiece of this ensemble movie, but the real star of “Boyhood” is the passage of time.

What could have been a gimmick in lesser hands becomes the heart of the story in this remarkable film, which in reality was filmed over a 12-year period. There’s no makeup to age the actors. There’s no switching out of actors — such as Patricia Arquette and Ethan Hawke as Mason’s parents — as the characters get older.

There’s just the real passage of time. This becomes the fabric of the movie and, it turns out, provides enormous aid to the actors in their characterizations.

With that unique filmic device comes a slow-burning realization: the one vivid moment that the characters are living in onscreen now will be nothing but a memory in just a few minutes, as the story jumps ahead another year. If there’s a conflict, it’s not the defining conflict of the film. It’s just another moment in a bigger picture.

The end result, as Mason arrives at his new college dorm during the last sequence, feels more than comprehensive — which is an interesting word to use since there are so many character beats and seemingly important moments left out.

Even with key moments missing onscreen, “Boyhood” feels like a life lived. Like a documentary, you see the characters change subtly even if you missed the easy-to-explain reasons for that change. Life is messy, and we’ve grown accustomed to expecting certain things from our movie plots, which is a shame. Every time a familiar plotline is teased in “Boyhood,” the film casually moves away from the typical cause and effect in favor of a broader view.

More than any movie I’ve ever seen, “Boyhood” makes the case that the physical transformation of a character can be as remarkable and reveling as the mental transformation. Robert De Niro may have gained a ton of weight in “Raging Bull” to play Jake La Motta in his later years, but he’s still wearing makeup and we know it.

“Boyhood” may be rooted in the gimmick of being filmed over 12 years, but Linklater uses it to such realistic effect that it doesn’t seem like one. He even chronicles the passing years by inserting all kinds of cultural changes into the story as well, giving the film a further ring of natural truth. The Internet and mobile phones evolve during the time period, as does the way characters grow and communicate with each other.

All of these small details add up to a truly singular movie-going experience. The transformation from childhood to adulthood is where the most radical personality changes can happen, but it isn’t just Mason who grows over 12 years. It’s fascinating — and wholly believable — to compare who the characters are from the beginning of the film to who they are by the end. “Boyhood” may be two and a half hours, and it may avoid the normal conventions of plot, but it has a weight and substance that feels like nothing else.

On the other hand, every single moment of “The Expendables 3” is entirely familiar. It's about as middling as an action movie can get, despite the fact that it stars Harrison Ford, Arnold Schwarzenegger and Mel Gibson — three former Hollywood A–listers.

Of course, these former heavyweights are all brought together for about 15 minutes of screen time each by Sylvester Stallone, he of the frozen, expressionless face. It’s the third movie in the all-star “old dogs” action series, one that has already included actors like Bruce Willis, Chuck Norris and Jean-Claude Van Damme.

The lazy screenplay, co-written by Stallone, has the ex-elite military team-turned mercenaries tracking down one of their own, and it runs through just about every action cliché in the book.

It opens with the obligatory rescue scene, where the Expendables break out knife-wielding badass Wesley Snipes from a moving train as he’s being transferred to another high-security prison. It features the standard montage where Stallone gathers new recruits in exotic locales as Kelsey Grammer narrates their skills — and the pair comes upon each recruit just as they’re about to illustrate said skills. And it has scene after scene of the Expendables walking away from huge explosions (or just escaping them) without looking back.

The action sequences are mostly uninspired messes with a lot of random shooting and bad guys biting the dust left and right. Since this is the first PG-13 film in the series, there’s no blood of course. But not all the tenets of Stallone’s heyday are respected.

Perhaps to keep the budget below $100 million, there’s also an over-reliance on CGI. Can’t we just blow up a helicopter like the old days anymore? Do we have to replace it with half-rendered computer effects? Rambo would not be proud.

The dialogue fits into one of three categories: It’s either jokes about being old, simplified exposition or unearned moments where characters talk wistfully of fallen comrades and brotherhood. If there’s one saving grace of “The Expendables 3,” it’s that some of the jokes, delivered by these familiar faces, are mostly good-natured and less often, funny. Arnie and Snipes get self-referential lines, Mel Gibson is hammy as hell, and Antonio Banderas occasionally livens things up — even if he is basically doing a low-rent, live-action version of Puss in Boots.

There are no surprises to be found here. “The Expendables 3” is exactly what you’d think it is — a disappointing mish-mash of a throwback, trading in on its star power, with its eye safely fixed on producing more sequels. 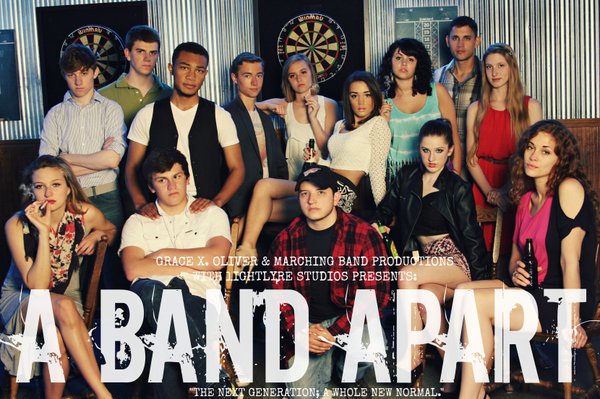 A poster for the Miniseries “A Band Apart” shows the ensemble cast. The miniseries was written, cast, directed and edited by recent Free State High School graduate Grace Oliver and was made with a no budget and a crew of volunteers. “A band Apart” is a mature drama set in the year 2016 following the lives of 15 teenagers. by Lexi Adams/Contributed Photo

After a year of working on her locally produced teen ensemble miniseries, Lawrence-based writer/director Grace X. Oliver will premiere "A Band Apart" in its entirety on 2 p.m. Saturday at the Lawrence Arts Center.

All six episodes of the series will run about two hours total, and will be followed by a Q&A with members of the cast and a reception. Check out our article from this time last year about Oliver's inspiration and the challenges of being a first-time filmmaker straight out of high school.