'Frank' puts a face on the creative process

Frank, the fringe musician who never takes off his giant papier-mache head (played by Michael Fassbender), isn’t going to kowtow to the rules, and neither does “Frank” the movie, opening Friday at Liberty Hall.

Directed by Lenny Abrahamson and written by Jon Ronson and Peter Straughan, “Frank” is loosely based on the real-life experiences of Ronson, who played music with the cult musician/comedian Frank Sidebottom in the late '80s/early '90s.

While Sidebottom (real name Chris Sievey) was an Englishman who appeared on several TV and radio programs, the fictional Frank is a mysterious person of unknown origin with an American accent who never takes off his mask. He’s a symbol of artistic integrity and raw creative inspiration.

Jon (Domhnall Gleeson), an average Irish bloke who wants to be a songwriter, is our way into Frank’s strange, uncompromising world. Jon strolls the suburbs singing to himself about whatever he sees, trying in vain to turn his surface-level ramblings into a song (“Lady in a blue coat/Do you know the lady in the red coat?”).

When he arrives home in time to eat dinner with his parents, he sends out a self-promoting tweet that masks the day’s failure, making it seem like just another productive day in the life of an artiste.

While out, he also witnesses a bizarre suicide attempt by drowning, as the keyboardist for Soronprfbs, the band fronted by the mysterious Frank, is chased by police out of the ocean and onto the beach to safety. The band’s manager Don (Scoot McNairy), invites Jon to play keyboards with them at a club that night, but does so with a brusque tone that almost feels like he’s joking. He’s not, it turns out.

Jon gets no rehearsal, and finds himself at a half-empty club, hesitantly playing along to the band’s experimental, post-rock music. Weeks later, he gets a phone call from Don. Frank likes what he did, and he’s in the band.

After introducing its premise, a movie traditionally follows a pattern of mounting tension and complicating action that propels the narrative forward, but the middle section of “Frank” is as stubbornly non-commercial as Soronprfbs’ unpronounceable band name.

In a remote Irish cabin, the band holes up to make an album, and Frank proves to be an unusual ringleader and source of creative inspiration, devising games and exercises that seem distantly related to music — somehow. Though memorable in and of themselves, these scenes get pretty redundant, driving home the same point: that Frank is some kind of mad, creative savant.

While his new bandmates are used to dealing with Frank’s eccentricities and look to him for guidance, Jon sits comfortably outside of it all, tweeting about and posting videos of the entire unusual recording process. He can’t believe how lucky he is to be in on the ground floor of something so amazing, and it’s his eagerness to please that easily becomes his most annoying trait. It also gives the movie a noteworthy conflict, putting a new face on the classic trope of art vs. commerce. 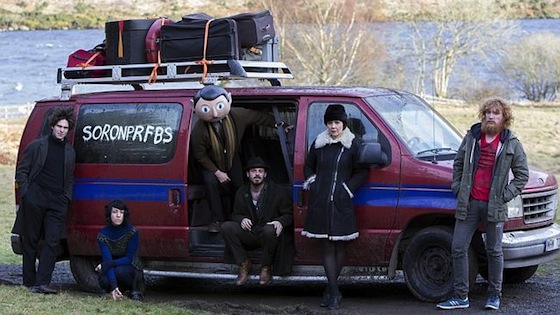 At its heart, “Frank” revels in the creative process and celebrates artistry that’s touched by madness, even going so far (in a bit of foreshadowing) as to reference original Pink Floyd bandleader Syd Barrett. But whereas Barrett’s music had its own unique whimsy and charm, the music made by Soronprfbs is dark and impenetrable, even when its songwriter is happy.

Fassbender’s singing voice (if you can call it that) has a very limited range, not made better by being buried within a papier-mache head. It would be easier to stand by Frank’s uncompromising “vision” if the quality of the music he was producing could match the novelty of the process.

It’s also quite hilarious how the film portrays artistic “cool”: According to Maggie Gyllenhaal’s character at least, it involves a lot of staring intently, making non-musical electronic noises while shaking and some general brooding.

The band, rounded out by drummer Carla Azar and bassist François Civil, is non-communicative except through their music (which is fitting), and fiercely protective of Frank. Apparently people who live in a purely naïve artistic bubble need sanctuary from reality, even though it tends to enter the picture every now and then in the form of a suicide attempt.

Eventually, something resembling a standard plot creeps forward, and when it does, “Frank” ambles toward what seems like an inevitable conclusion. Ironically, as the grayer parts of Frank’s character get filled in, the movie loses a little of its charm.

In retrospect, it’s the rambling middle section that sticks out, partially because of an emotionally satisfying final turn that keeps things appropriately dark. Being artistically pure is no simple thing, and although Frank takes this idea to an incongruous level, he’s an apt and sympathetic symbol for outsider artists everywhere.

The other film opening at Liberty Hall this weekend has a sort of thematic bond with "Frank."

"The Skeleton Twins," starring Bill Hader and Kristen Wiig, is about grown twin siblings who are reunited after years of being apart when one of them attempts suicide.

Mark Heyman and director Craig Johnson won a screenwriting award earlier this year at the Sundance Film Festival for the movie, and Hader and Wiig have earned praise for their chemistry and understated performances.