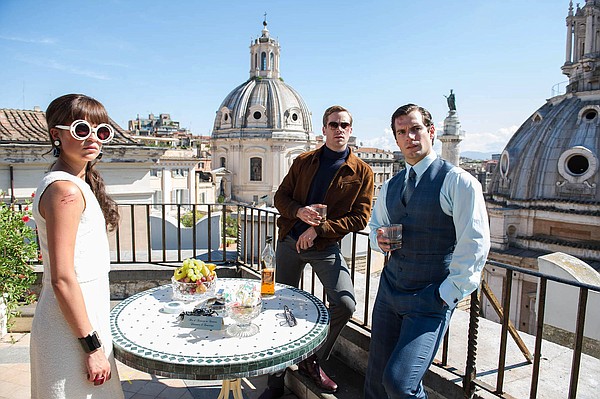 From left, Alicia Vikander, Armie Hammer and Henry Cavill in “The Man from U.N.C.L.E.”

The spy thriller “The Man From U.N.C.L.E.” has a couple of underdog qualities that had me rooting for it from the get-go.

First, I love the idea that rather then merely stealing the name of the mid-'60s TV show and updating it to the present day (as has been done with “Get Smart” and “Mission: Impossible”), co-writer/director Guy Ritchie keeps “U.N.C.L.E.” set in the 1960s. It’s a bold move, because the traditional Hollywood thinking is that making an action film a period piece limits its commercial potential.

(Side note: After three unsuccessful modern-day big-budget “Fantastic Four” movies, however, somebody might want to try setting the next one during the space race of the early '60s. It’s pretty much tied into the DNA of the original characters and would really stand out in the crowded superhero marketplace. The period is baked into everything about “U.N.C.L.E.” as well, so again, good on Ritchie.)

Secondly, Ritchie made “The Man From U.N.C.L.E.” for a relatively low $75 million, which — for a Hollywood blockbuster with exquisite costume design and period art direction, which it very much has — makes it kind of a scrappy film.

Ritchie probably pushed the period angle through based on his success as the director of the Robert Downey Jr.-starring “Sherlock Holmes” reboots, which made over a billion dollars worldwide. Those soulless exercises in flash-bang filmmaking are barely watchable, and even then, it’s only because Downey Jr. and Jude Law have some actual chemistry as they prop up all the hollow trickery around them.

Unfortunately, “The Man From U.N.C.L.E.” doesn’t have Downey Jr. or Law. It has Henry Cavill and Armie Hammer, who trade in the same kind of faux-clever one-upsmanship that Holmes and Watson do, with similarly weak dialogue but barely a quarter of the charm.

The movie is an origin story, following Solo to East Berlin, where a KGB agent named Illya Kuryakin (Hammer, doing some kind of Schwarzenegger-like “Red Heat” accent that comes and goes) keeps foiling him at every turn.

Eventually the two pair up, and this enormous-male-ego odd couple smugly try to outdo each other at every turn, even as they are forced to work together. This includes being in charge, seducing ladies, and lobbing lame homo-erotic jabs that seem straight out of “Tango & Cash.”

At least Hammer has a little bit of comic timing. Plus, watching him wrestle with such a ridiculous accent gives his performance a kind of good-natured appeal.

Besides being incredibly good-looking (which I suppose in this role, is its own version of “convincing”), Cavill never once feels like he’s living the part. On top of that, his comic delivery leaves much to be desired. In one scene, Solo decides to sit on his hands and do nothing while his new partner fights for his life. The bit — intended to be comic relief — arrives too late as a joke and is stone cold dead.

Alicia Vikander, so intriguing as the android in “Ex Machina,” has the thankless role of a clotheshorse. She’s originally a model, so in that respect she’s perfect for it, and Joanna Johnston’s elegant costuming is sure to get an Oscar nomination. But after Vikander’s breakout performance earlier this year, it’s a big disappointment to see her wasted.

Even with the actors and sets dressed up gorgeously, the movie has a strangely muted color palette. Perhaps Ritchie and cinematographer John Mathieson were wary of getting too close to “Austin Powers”-like parody or the bright Technicolor of the '60s themselves, but “U.N.C.L.E.” is all gray, some dark blues and browns, and a splash of maroon every now and then.

With their superhero movies, Zack Snyder and Christopher Nolan have done their best to convince everyone that darker equals “more serious” and certainly Ritchie approaches this material with very little irony, but when your movie is as empty as this one, it doesn’t help. The wooden performances and over-burnished look just create a stifling atmosphere.

Overall, “The Man From U.N.C.L.E.” fails to ignite on any level. Ritchie’s usual hyper-kinetic camera trickery is dialed back considerably (which means it’s only on 8 instead of 11) and he throws in some nifty split-screen action, but it quickly wears out its welcome and takes on a numbing quality, especially because the film is a long two hours and can’t muster anything even remotely resembling character investment.

“The Man From U.N.C.L.E.” is 116 minutes, and rated PG-13 for action violence, some suggestive content, and partial nudity. 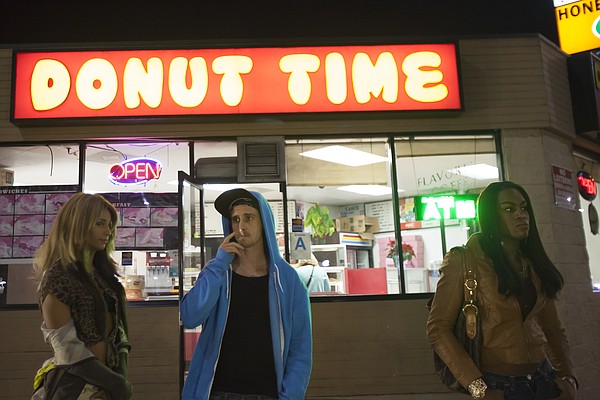 “Tangerine,” now playing at Liberty Hall, is making big waves this summer on the indie circuit, both for its subject matter and low-budget filming approach.

The movie was shot in Hollywood, but it’s a very different Hollywood than the City of Dreams mythologized in so many films. “Tangerine” is a fictional film profiling two transgender sex workers on Santa Monica Boulevard, played by transgender actresses Kitana Kiki Rodriguez and Mya Taylor, in their first film roles.

The film received universal acclaim when it premiered at Sundance this year and has already made more than five times its budget at the box office.

“Tangerine” is 88 minutes, and is rated R for strong and disturbing sexual content, graphic nudity, language throughout, and drug use.