Three Oklahoma filmmakers are going on a road trip throughout the Midwest to screen their newest projects, and they are making a stop at the Lawrence Arts Center.

The Free State Fest Film Society presents an encore performance of Free State Fest short-film favorite “Calls to Okies: The Park Grubbs Story,” as well as the 60-minute documentary “The Verdigris: In Search of Will Rogers” on Aug. 15.

With one doc being an earnest exploration of a beloved American icon, and the other celebrating illegal, obscenity-laced anarchy, this double feature is opposite in terms of tonality. But Bradley Beesley, who co-directed “Calls to Okies” and executive produced “The Verdigris” is the common thread. It was Beesley’s assistance that helped songwriter Beau Jennings expand the scope of his personal journey to learn more about Will Rogers, who is often a forgotten figure in U.S. history.

“He's often confused with Woody Guthrie or Roy Rogers,” Jennings says. “One thing in particular I think people forget about Will was that he was very innovative and set a precedent for what many comedians and political commentators have done since. He was the first public to figure to crack a joke about a sitting U.S. President, which at the time was very risky. He basically created the template for late-night style variety shows. He championed aviation in its infancy. You could even make the argument he was the first ‘blogger.’”

The Verdigris: In Search of Will Rogers - Official Trailer by Beau Jennings

Jennings was born almost 100 years to the day after Rogers, and he used to visit the Will Rogers Museum often when he was a child. He’s always held his Oklahoma roots dear, and when he moved to Brooklyn, that came into even sharper focus.

“The songs I started writing to explore that,” he says, “all seemed to reference Will — or trace back to him in some way. So he became a good vehicle for the journey.”

This musical tribute to Rogers just sort of happened organically. Jennings’ songs became an album, which morphed into a road trip. The intention was to let some of the ambient noise on the journey (wind, traffic, water) become a part of the recordings, and maybe get some images.

The idea for making some music videos came up, and eventually the entire project became a documentary. Jennings will perform some acoustic numbers from the film following the screening as part of a live Q&A.

Beesley and “Calls to Okies” co-director Ben Steinbauer will also be on hand for the Q&A, which will no doubt feature lots of questions about the true identity of prank-call ringleader and mystery man Park Grubbs. In “Calls to Okies,” Grubbs is shown confronting the cameraman and appears with only a black bar over his eyes. 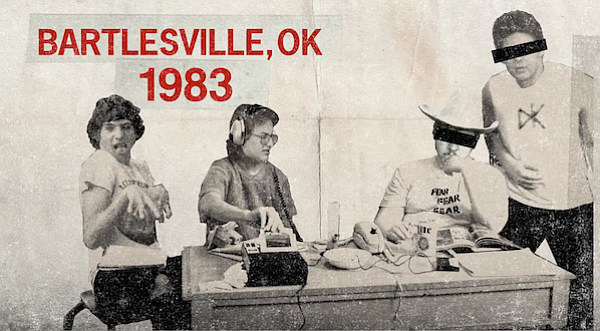 “It’s not an act,” Steinbauer says. “Park Grubbs was very skeptical of us and with the thought of sharing any personal information with our cameras. On our first trip to attempt to interview him, he put his finger in our chests and said, 'If you ever cross me, I will come after you and your crew and that is a promise.' He was not joking. He’s a very private person and at the end of the day, we wanted to respect his wish to remain anonymous.”

In 1982-83, Grubbs and his teenage skater Okie cohorts made a prank-call cassette tape that has been passed on over the decades and achieved — with good reason — legendary cult status. In fact, the “Calls to Okies” tape was originally made by Grubbs and pals solely to entertain their group of friends.

Unlike The Jerky Boys, who would go on to multiple platinum certifications and a Grammy nomination for their prank calls, “Calls to Okies” was commercially unavailable for 11 years — and then only released on a tiny indie label. (A cassette of that release is currently selling on eBay for $100.)

“The calls certainly have a land-locked, no access to culture, ‘I know a lot of red-necks’ appeal, but many of the Okie hipsters that loved the calls moved to L.A., Seattle and New York City and spread the tapes far and wide,” Beesley says. “We’ve shown this film in major cities and those folks love the calls and we keep meeting new die-hard fans everywhere we go. The absurdity of the calls captures people’s imaginations and some of the phrases stick with you for life — like, 'I'm gonna bathe your entire family'. We think about that line and laugh weekly.”

This is a sentiment I can relate to, as several lines from this tape have found their way into my daily conversation since I first heard it back in 1991.

The other thing besides the cultural specific-ness of “Calls to Okies” that makes it unique are the surreal places that Grubbs goes to and the fact that many of the callers go right along with it — and sometimes take the calls to a new level of absurdity.

These calls are far funnier and more astonishing than anything The Jerky Boys ever did because they go way beyond pure insults, which was The Jerky Boys' stock in trade.

To bring the calls to life, Steinbauer and Beeseley decided to employ some punk-rock aesthetic animation techniques that are right in line with the guys who made the tapes back in the early '80s.

“It’s difficult to make a film about audio recordings, which are inherently non-visual,” Steinbauer says. “Because everyone we interviewed had their own ideas about who Park Grubbs was, we decided to work with a team of very talented animators — Ron Pippin, Shiny Object and Ben Lee — who all brought their own unique rendering of who the man was behind the legendary recordings.”

It’s a strategy that works well, and the screening I saw of the film at Free State Fest in June had people howling with laughter. My only complaint with the movie is that, at 20 minutes, there isn’t enough time to include all of my favorite calls.

“Calls to Okies: The Park Grubbs Story” and “The Verdigris: In Search of Will Rogers” screen at 8 p.m. Aug. 15 at the Lawrence Arts Center, followed by a filmmaker Q&A and live acoustic performance from Beau Jennings. Tickets are $10.