Most boxing movies are rags-to-riches stories but “Southpaw,” starring a bulked-up Jake Gyllenhaal, is a riches-to-rags story.

This reversal of the traditional structure doesn’t mean that the film isn’t riddled with other cliches, however. Writer Kurt Sutter (“Sons of Anarchy”) and director Antoine Fuqua (“Training Day”) understands those cliches and the film flaunts them like bling in a rap video. 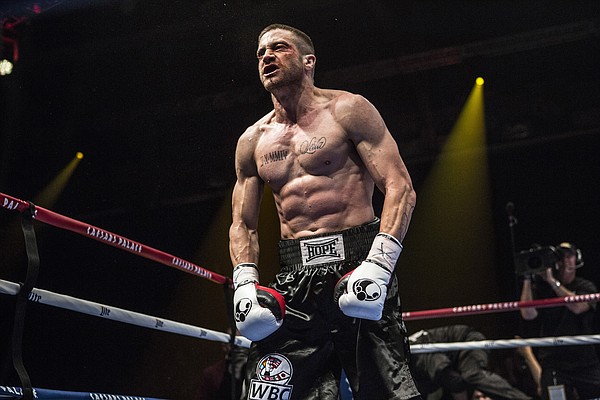 It’s the deeply earnest performances from Gyllenhaal, Forest Whitaker, Oona Laurence and Rachel McAdams — and the natural tendency to get behind the underdog — that keeps “Southpaw” going, even when a crushing inevitability hangs over the entire movie.

It makes sense that a movie written and directed by this uber-macho pair of filmmakers would be “gritty,” which it is right from the first shot. With blood streaming down his face, longtime light heavyweight champ Billy Hope (Gyllenhaal) screams directly into the camera, taunting his opponent in the ring. It’s OK that Billy’s arms are down, leaving him unprotected. It turns out that’s his thing.

A la “Rocky,” Billy is used to taking lots of punishment. The intention of “Southpaw,” a title that pushes the underdog mentality even further and is loaded with all-too-obvious significance only toward the end of the film, is to dole out that punishment to Billy outside of the ring, and make sure the audience feels it as well.

At first, Billy’s life is perfect. He may have all of the tattoos and pent-up rage of a scary gansta-culture sports professional, but he’s really just a family man who dotes on his daughter Leila (Laurence) and is still madly in love with his former childhood sweetheart and wife, Maureen (McAdams).

The couple are both orphans and their unlikely success story is the kind of thing that gives people, well, Hope. (“The Great White Hope”? Technically yes, he’s white — and the film was originally written for Eminem (who is a producer) — but “Southpaw” strangely acknowledges that 1970 film by nicknaming Billy “The Hope,” but ignores its loaded racial connotations, striving instead for straightforward solemnity.)

If you’ve seen the trailer for “Southpaw,’ and you’ve read my column before, you probably know I’m about to rant again. I stay away from trailers, so I didn’t know this until after seeing the movie, but there is an enormous plot point given away in the trailer. I don’t know why I even bother dancing around it, but let’s just say that the perfect nouveau-riche lifestyle Billy and family is used to changes drastically and all at once.

There are worse things in store for Billy than this, but his money mismanagement alone is of such an epic proportion that it’s pretty tough to swallow. Curtis “50 Cent” Jackson plays his money-hungry manager, and at first I thought he was too stiff and one-dimensional. As it was revealed how absolutely cold-hearted and devoid of human feeling the character is, however, I began to realize he might have just been perfectly cast.

Hard-to-swallow plotting aside, Billy’s tailspin is made more believable by Gyllenhaal’s lived-in performance. And although the two actors don’t have nearly enough scenes together, he and Laurence manage to make the father-daughter relationship special, even with the small amount of screen time together they actually have.

By the time Billy’s troubles lead him to the gym of Whitaker’s wise, hard-luck boxing trainer, it is painfully clear where everything is headed, and “Southpaw” relies on Fuqua to string together scene after scene after montage of dark-horse cliches. Don’t call it a comeback — Hope is just a man humbled who must gather the courage to do the only thing he knows how to do: fight.

Fuqua doesn’t necessarily innovate in terms of film language when it comes to the boxing scenes (where can anyone go after the impressionistic sound effects and camerawork of “Raging Bull” anyway?) but they are paced with the requisite amount of ups and downs required for suspense.

Like the rest of “Southpaw,” though, there’s that inevitability factor, and it’s tough to support a two-hour film when its course seems predetermined and it hits every familiar beat along the way.

“Southpaw” is 123 minutes, and is rated R for language, and bloody boxing violence.

Now playing at Liberty Hall is “Mr. Holmes,” a reunion for director Bill Condon and star Ian McKellan, who last worked together on Condon’s best film to date, the dark true-life Hollywood tragedy “Gods and Monsters.”

If McKellan is anywhere near as brilliant and heartbreaking as he was playing “Bride of Frankenstein” director James Whale in that film, “Mr. Holmes” might stand a chance to rise above its “Masterpiece Theater”-like underpinnings. (Yes, Laura Linney, most famous recently for introducing new episodes of “Downton Abbey” on the popular PBS program, is a co-star.)

“Mr. Holmes” takes place in 1947 and is an adaptation of Mitch Cullin’s 2005 novel “A Slight Trick of the Mind,” which features Sir Arthur Conan Doyle’s famous British detective Sherlock Holmes in his twilight years. The long-retired detective tackles an unsolved case and no doubt learns as much from an inquisitive young boy (Milo Parker) as the boy learns from him.

“Mr. Holmes” is 104 minutes and rated PG for thematic elements, some disturbing images and incidental smoking.