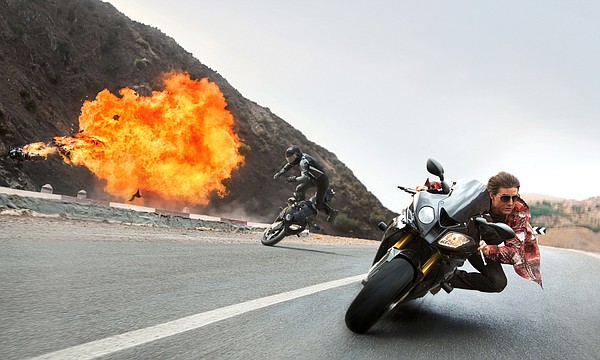 After four “Mission: Impossible” films where superspy Ethan Hunt (Tom Cruise) has risked his life and sacrificed any chance of future happiness for his country while wiggling out of the most unlikely tight spots ever devised, how is it that the fifth installment, “Mission: Impossible - Rogue Nation,” is still able to pile on the suspense?

We know, after all, that Hunt isn’t going to die, because otherwise Cruise’s most successful franchise is kaput. And the stakes have gone from being international to personal.

Hunt already gave up the love of his life in earlier films for this most dangerous of careers. Outside of another nation-threatening dilemma (and who hasn’t seen a million of those recently in every superhero movie?), what else is there that writer/director Christopher McQuarrie can possibly do to Ethan Hunt that will make us worry for his safety?

Well, for starters, he can release a teaser scene of Cruise holding on for dear life to the side of a moving airplane. It’s a shrewd move, because the 53-year-old actor is known for doing his own stunts, such as hanging from a cliff in “M:I 2” and climbing on the outside of the world's tallest building in “Ghost Protocol.”

But that airplane sequence only comprises the first five minutes of “Rogue Nation” (which, being a spoiler-phobic avoider of trailers, I find to be an astute move). No, McQuarrie (and Drew Pearce, who has a co-story credit) have more old-school thrills in mind, and they stem from a combination of Hunt's justified paranoia and a battle of wits that’s so convoluted you’d think the men on both sides must be psychic.

The man opposite Hunt is Lane (Sean Harris), the leader of an underground terrorist organization motivated by money called The Syndicate. It’s not the most original name in the world, but McQuarrie’s efficient script builds this “anti-IMF” up to be Hunt’s strategic equal, with the advantage of being untroubled by any sense of moral dilemma. It’s a very “Dark Knight” kind of dichotomy, with Hunt and Lane the Batman and Joker of the film: two sides of the same coin.

Like the Joker, Lane seems to be two steps ahead of Hunt at every turn as he manipulates all situations to make sure Hunt does his bidding. One reason he continues to be strung along (despite recognizing it) is Ilsa Faust (Rebecca Ferguson), an ex-British double agent whose loyalty is constantly in question, while her attraction to Hunt never is.

Hunt sidekick Benji (Simon Pegg) is back for comic relief again, and he doesn’t disappoint, but Pegg excels at making his computer expert more human than the usual stereotype, and when he’s in danger, it’s palpable. Having debuted in the last film, Jeremy Renner is newer to the team, so his loyalty is also in question and McQuarrie gives he and Ilsa plenty of scenes to keep the audience guessing.

There’s also series newcomer Alec Baldwin, a perfect choice to make the most out of a small role as an antagonistic CIA director. Ving Rhames, the only other actor from the 1996 original besides Cruise to appear, is reliably, well, reliable. There’s no question he’s got Hunt’s back, which is probably why he has the least to do.

Put simply, “Rogue Nation” is an old-fashioned paranoid thriller wrapped up in the body of a 21st century action movie. There are plenty of ridiculous stunts, and they’re pulled off with the skill and grace we’ve come to expect, just as we’ve come to expect Hunt to walk away from a multiple end-over-end car flip virtually unscathed.

But the set pieces are lush (one standout is an assassination attempt at an Italian opera) and the action seems mostly done in camera, without an over-reliance on CGI effects.

With the will-they-or-won’t-they tension between Ferguson and Cruise, the densely plotted conflicts that rarely give you time to think too much about them and the fact that everyone on all sides has a reason to stop Hunt, “Rogue Nation” is a satisfying Hollywood actioner that keeps you guessing.

Baldwin’s character at one point calls Ethan Hunt — the single-minded hero who makes miracles happen on an hourly basis — “the living manifestation of destiny.” It’s the only way to explain the supernatural combination of skill and luck that has carried Cruise’s iconic character through these films, and it’s the rare moment that the franchise winks to its audience.

What this series has going for it otherwise, especially in the last three installments, is an ability to squeeze out suspense and surprise without going full-on parody. The events depicted are just as unlikely to happen in any modicum of real life as in the “Fast & Furious” films, but the tone isn’t as deadpan serious, soapy or corny. Dare I say “Mission: Impossible - Rogue Nation” is kind of... classy? Yes, I think I do.

“Mission: Impossible – Rogue Nation” runs 131 minutes and is rated PG-13 for sequences of action and violence, and brief partial nudity.