'Spectre' pays tribute to the ghosts of Bond films past, for better or worse

“Spectre,” the 24th official James Bond movie in the Eon Productions series, is the most “Bond” movie since Daniel Craig took over the lead role in 2006.

Name any quality of classic Bond — stylish costumes, international locations, outlandish action scenes, martinis, slick cars, spy gadgetry, gorgeous women, silent henchmen, or villains with needlessly labyrinthine plans — and you’ll find it here, looking better than ever before. Every penny of the film’s reported $300 million budget is on display for 148 minutes, making it not just the most expensive, but the longest film in the franchise.

This is mostly to the film’s benefit, but paying tribute to so many of the long-running franchise’s iconic traits means “Spectre” has its share of bad habits as well. 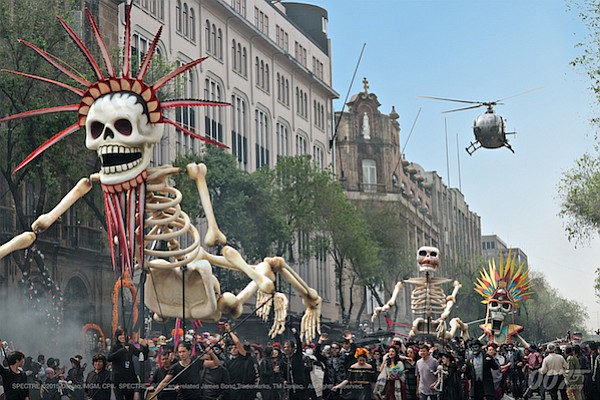 Taking over the reigns from Oscar-nominated “Skyfall” cinematographer Roger Deakins is Hoyte van Hoytema (“Interstellar,” “Her”), and the first part of a stunning opening sequence, shot in Mexico City with 1,500 extras during a Day of the Dead celebration, is a seemingly one-take wonder that will leave cinephiles wondering how he accomplished it for years to come. (Or at least until they explain it all on an upcoming Blu-ray extra feature.)

Sidenote: The screening I saw opened by playing the entire music video for Sam Smith’s theme song “Writing on the Wall,” which includes clips from the movie. Assuming this comes after the previews and you’ve been sitting in the theater a while already, this is a perfect time for a bathroom break. Besides showcasing Smith’s annoyingly over-emotive lip-syncing technique and giving away at least one clip from the film’s finale, this terrible video is made redundant when the song is then played again in its entirety over the credit sequence.

“Spectre” jet-sets from Mexico City to Rome for a too-brief sequence with Monica Bellucci (the oldest Bond girl, at 50) and back to London, as Bond gets scolded by the new head of MI6, Ralph Fiennes, taking over for Judi Dench. With the interplay between Dench and Craig missing, “Spectre” has little of the emotional weight that grounded “Casino Royale” — still the high-water mark for the franchise — or “Skyfall.”

Much like Ethan Hunt in the latest “Mission: Impossible” movie, Bond is forced to go rogue, albeit not without conning Q (Ben Whishaw) out of a nifty watch gadget and stealing an Aston Martin. Thanks to a recorded video message from Dench’s M, he’s already hot on the trail of the far-reaching criminal organization that gives the film its title. Anyone familiar with Bond lore will know what this means and which famous villain Christoph Waltz is playing.

Bond meets up with the fetching Dr. Madeleine Swann (Léa Seydoux), whose resentment toward him predictably fades, and Seydoux has a couple of moments to rise above the damsel-in-distress part she’s given. When it comes time to admit their simmering attraction is real, it happens in the most Bond way possible, and is one of many throwback moments.

Part of the fun of “Spectre” for Bond aficionados will be trying to spot all of the myriad references to past movies. I give credit to Mendes at least for re-imagining and updating these familiar tropes with a scale of production design (by Dennis Gassner) that’s unmatched.

With this and “Skyfall,” James Bond has truly been realized with the slick, modern elegance the franchise has always chased, and in 2015, its retro-'60s style looks cooler than ever. It's hard to imagine another director topping Mendes in this department anytime soon, or ever. If you are already planning to see “Spectre,” you’ll definitely want to see it on the big screen.

The action scenes are big and badass, thanks in part to hulking Dave Bautista who doesn't speak a word but relentlessly pursues Bond, Terminator-style, and proves to be more than his equal at least once. Without quite dipping into absurd “Fast & Furious” territory, Mendes reaches some thrilling heights in this department as well, and the editing is clean and easy to follow. In these action sequences, returning composer Thomas Newman goes heavy on the bombast, which works well but gets a little old by the end.

In paying so much tribute to classic Bond themes, however, there’s no room for innovation in the plot department. The only fresh plot device in “Spectre” is a lame stab at commenting on modern privacy issues that other films have already covered ad nauseam. Most of the film plays like a game of Connect Four, piling up and grouping together characters and schemes from Craig’s last three films in vaguely related ways, in the hopes that the connections to Bond’s past will bring them some emotional heft.

They don’t, and when the fourth and final piece is finally added, it lands with a thud. Like the game, the bottom falls out and “Spectre” is left empty, with its Bond references and clichés scattered across the table.

“Spectre” is rated PG-13 for intense sequences of action and violence, some disturbing images, language, and sexual politics from 50 years ago.