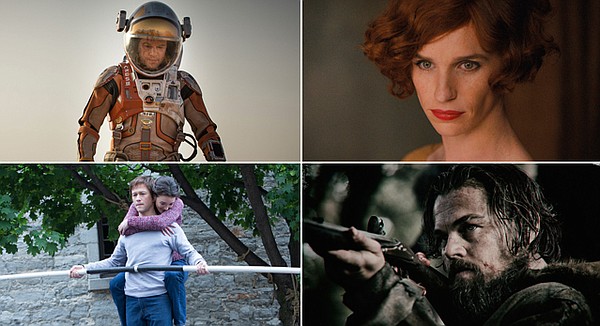 Clockwise from top left: "The Martian," "The Danish Girl," "The Revenant" and "The Walk"

This autumn is littered with the usual mix of prestige pictures, Oscar hopefuls and indie dramas, all vying for attention in the season of “serious” movies.

Here’s a look at some of the other buzzed-about films of the fall and what could make them stand out from the pack — and why they could fall flat.

Matt Damon is an astronaut stranded on Mars in this Ridley Scott (“Alien,” “Gladiator”) adaptation of a self-published novel, which promises more first-person drama and less gimmicky sci-fi action.

Could be great if: it combines the sophisticated action and character development of “Gravity” with the rescue mission of “Apollo 13.”

Could fall flat if: it feels too familiar, a la “Interstellar,” which also co-starred Damon and Jessica Chastain, his co-star again here.

Could be great if: director Robert Zemeckis leverages IMAX 3-D technology along with old-school action storytelling to give moviegoers a unique experience.

Could fall flat if: it mirrors too closely the Oscar-winning documentary “Man on Wire,” which already told this story in thrilling fashion.

With a screenplay from Aaron Sorkin (“The Social Network”), direction from Danny Boyle (“Slumdog Millionaire”), and Michael Fassbender in the title role as the iconic Apple visionary, the potential for this one is enormous.

Could be great if: Fassbender is able to bring some real depth to a man who still seems like a mystery, even after receiving the biographical treatment in multiple books and movies.

Could fall flat if: Sorkin has an axe to grind, and takes a one-note approach to Jobs’ many contradictions.

The latest film from writer-director Guillermo Del Toro is a gothic romance/ghost story set in 19th-century England, and boasts an all-star cast, including Mia Wasikowska, Tom Hiddleston, and Jessica Chastain.

Could be great if: it’s a real return to Del Toro’s roots, in the vein of his R-rated nightmarish adult fairy-tale “Pan’s Labyrinth” or his spooky ghost story “The Devil’s Backbone.”

Could fall flat if: it’s marred with a big-budget Hollywood mentality, and is too worried about pleasing mainstream audiences.

Steven Spielberg directing. Tom Hanks starring. Joel and Ethan Coen co-scripting. Yeah, this Cold War spy thriller, based on a true story, has quite a pedigree.

Could be great if: it’s as tense as it the trailer would have us believe. If there’s some modern-day parallels to be drawn, even better.

Could fall flat if: it’s schmaltzy pap like Spielberg and Hanks’ last collaboration, “The Terminal.”

An adaptation of Rachel Boyton’s 2005 documentary of the same name, this political drama about American marketers getting involved in a Bolivian election stars Sandra Bullock and Billy Bob Thornton.

Could be great if: director David Gordon Green gets intimate with his characters, like he has in indie successes “Joe” and “All the Real Girls.”

Could fall flat if: Green handles the big stars and big budget like he did in forgettable Hollywood comedies like “Your Highness” and “The Sitter.”

The tragic story of country legend Hank Williams, who died at 29 and changed the face of popular music, is recounted in this biopic starring the British guy who played Loki in “The Avengers.”

Could be great if: that British guy (Tom Hiddleston) makes us forget who he is and convincingly portrays the tormented honky-tonker, whom he already bears a striking resemblance to.

Could fall flat if: it’s another formulaic biopic with a tacked-on happy ending.

Could be great if: the film is as humanistic a portrait as the book (a fascinating piece of historical fiction from David Ebershoff) it is based on.

Could fall flat if: director Tom Hooper brings the same sense of gimmicky bombast he did to his roaring adaptation of “Les Miserables.”

Jennifer Lawrence and Bradley Cooper reteam with David O. Russell, their director on “Silver Linings Playbook” and “American Hustle,” to tell the quirky tale of the inventor of the Miracle Mop.

Could be great if: Lawrence and Cooper have their usual chemistry and it channels another twisted side of the American Dream the way “Hustle” did.

Could fall flat if: it tries too hard with its oddball intentions, like Russell did in the admirable but messy “I Heart Huckabees.” Even then, at least it will be interesting!

Could be great if: the now-infamous stories of a set plagued with problems actually creates a palpable sense of danger that bleeds into the film itself.

Could fall flat if: Iñárritu’s strategy of using only natural light to create striking visuals is just a mask to cover its lack of emotional investment.

Could be great if: Tarantino retains his iconoclastic creative spark and avoids repeating himself.

Could fall flat if: it covers the same ground as his Western “Django Unchained” and his last five movies, which have all been revenge pictures.