Posts tagged with Beasts Of No Nation

Posted by Eric Melin on December 4, 2015 at midnight

Every January when the Academy Award nominations are announced, movie fans all over the world scan the ballots to see which movies they need to catch up on. Some of the films nominated will be playing in theaters, and some will have already been released on Blu-ray/DVD, but this year there’s a high probability that their search for at least three films will be as easy as going to Netflix and pressing “play.”

The one that’s really making waves is director Cary Fukunaga’s West African-set war drama “Beasts of No Nation”, which was acquired for $12 million by Netflix in March and has been available through the subscription-based streaming service since Oct. 16.

Starring Idris Elba as a power-hungry leader known as The Commandant, and 15-year-old unknown Abraham Attah as child soldier Agu, the movie is a moving coming-of-age tale set against a nightmarish backdrop, and was adapted from Uzodinma Iweala's 2005 novel. 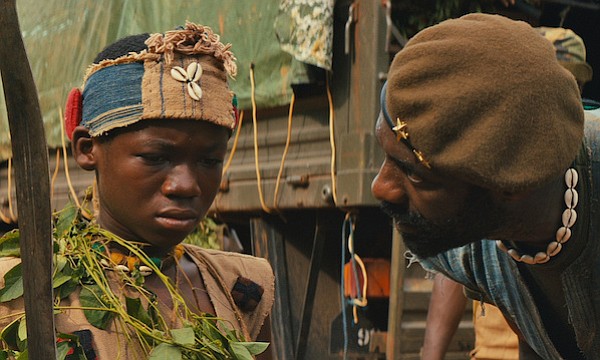 “Beasts of No Nation” was shot in the jungles of Ghana, and Fukunaga’s keen visual sense (previously displayed in his adaptation of “Jane Eyre” and season one of HBO’s “True Detective,” of which he directed every episode) is again on display. His roving camera moves slowly and conjures up some haunting imagery, portraying the sometimes beautiful and almost always disturbing events from Agu’s point of view. (It has no official MPAA rating, but due to some extreme violence, that rating would most certainly be a hard R.)

You might have seen the Leonardo DiCaprio vehicle “Blood Diamond” or a number of other films that subtextually deal with children drafted into guerrilla warfare in Sierra Leone or Liberia, but “Beasts of No Nation” is different because it focuses on one child’s unique experience. It’s not an issue film — it’s a story about a boy who has a rich family life but then tragically loses it all and is left to fend for himself. When Elba’s charismatic Commandant takes him under his wing, he finds a substitute father figure, and the movie continues to surprise from there.

Independently produced for $6 million, “Beasts of No Nation” is poised to be an indie heavy-hitter during awards season. The film has already garnered five nominations at the 2016 Independent Spirit Awards for Best Picture, cinematography and Fukunaga, Attah, and Elba.

To qualify for the Oscars, Netflix gave the film a brief theatrical run in 31 theaters, garnering a meager $91,000, which under any other circumstances would be a huge loss. But because it also released “Beasts of No Nation” the same day through its streaming service, it was instantly made available to 69 million subscribers in more than 50 countries. The company’s chief content officer, Ted Sarandos, is famous for not releasing viewership numbers, but he was quick to mention that in the movie’s first week, it was seen by over 3 million people and was the most-watched film in every country where Netflix operates.

No stranger to the awards circuit, Netflix has already invaded the world of traditional TV with multiple Emmys and Golden Globes for its original series “House of Cards” and “Orange is the New Black.” Its battle with movie theaters, however, is just getting started. Box office behemoth Adam Sandler has a multi-picture deal with Netflix, and his new comedy “The Ridiculous Six” debuts there exclusively on Dec. 11. Coming soon are a Weinstein Co.-produced sequel to “Crouching Tiger, Hidden Dragon,” a Pee-Wee Herman movie, a Brad Pitt military parody called “The War Machine” and a Cambodian War memoir directed by Angelina Jolie.

The company hasn’t pushed an awards campaign of “Beasts of No Nation” magnitude before, but it has been heavily invested in the documentary category since 2013, when Netflix acquisition “The Square” was nominated for an Oscar. This past January, “Virunga,” another Netflix doc, was nominated for a 2014 Oscar, and Tuesday it was announced that two new Netflix documentaries are on the Academy’s shortlist for 2015. Both are available now.

“What Happened, Miss Simone?” opened the Sundance Film Festival earlier this year, and it probes the life of iconic jazz singer Nina Simone. Directed by Liz Garbus, the movie uses rare archival footage to illuminate more than Simone's uncompromising music, positioning her as equally resolute in fighting racism and sexism — her own way.

“Winter on Fire” is in the same you-are-there vein as “The Square,” which was about the Egyptian uprising, only this is set in Ukraine during 90 days of the Euromaidan protests that turned violent. “Winter on Fire” won the People's Choice Award at the Toronto Film Festival, and is riding a wave of solid buzz into awards season.

This weekend, Amazon’s streaming service also enters the movie awards conversation with Spike Lee’s “Chi-Raq,” which was co-written by KU professor Kevin Willmott (see my interview with him), and was originally planned as a holiday streaming release only, but is now out in just over 300 theaters. A loose adaptation of the classic Greek play “Lysistrata,” it mixes music, broad comedy and topical drama, and pairs newcomer Teyonah Parris with supporting roles from Samuel L. Jackson, Wesley Snipes and John Cusack.

Ironically, Amazon is now playing coy with its streaming release date, presumably trying to drum up as much business as possible theatrically first. It’s a more traditional approach than Netflix’s day-and-date premiere, but Amazon will probably put the film online much faster than the normal 90-day waiting period that the multiplexes usually require. If it works, and the movie grosses well this weekend, this release model could be the new compromise the major chains will have to deal with going forward.