When The Latenight Callers were formed in 2008, Lawrence drummer/keyboardist Nick Combs didn’t know that much about film noir.

The band calls its style “noir-a-go-go,” and its music sounds like something you might hear in a smoky Prohibition-era jazz club of the future. It’s three guys playing vintage gear, dressed in black ties and coats, and fronted by a curvy, red-lipsticked femme fatale.

Fast-forward seven years, and Combs is organizing his second Noir City Kansas City film festival Oct. 2-4 at the Alamo Drafthouse Mainstreet, featuring 10 gems from the classic period of film noir all screened on rare 35mm film. Three of the movies being shown are newly restored 35mm prints that were saved from extinction by the nonprofit Film Noir Foundation.

“We've always felt inspired by the themes of noir, the intrigue and mystery of it, and the history behind it. We're a band based on taking very old and traditional sounds and trying to use them in very modern ways, which is very applicable to film noir,” Combs says. “Many famous film noir movies were just re-tellings of old crime novels and stories of the era, updated and applied to the then-modern standard.”

On Oct. 2, The Latenight Callers will play at The Chesterfield bar, in the Mainstreet building, as part of the festival’s opening night Noir City Nightclub. The show will also feature burlesque performer Evie Lovelle, as well as jazz singer and Kansas City native Laura Ellis. And if it seems strange to have a vintage nightclub-style show in this theater, then you don’t know much about the Mainstreet.

Opened in 1921, the Mainstreet Theater hosted all kinds of vaudeville acts, including Cab Calloway, the Marx Brothers, and Charlie Chaplin. The basement of the Mainstreet used to have a tunnel that gave bootleggers passage to escape police during Prohibition.

During this time, Kansas City was well known for sin and corruption. Dubbed the “Paris of the Plains” by Omaha World-Herald journalist Edward Morrow, the city was controlled from the mid-'20s to 1939 by the powerful Pendergast mob.

One of the films showing at Noir City is “Kansas City Confidential,” a 1952 noir that has influenced the look and structure of many movies since then, most notably Quentin Tarantino’s debut film “Reservoir Dogs.”

"Kansas City Confidential" was originally called "Kansas City 117," which was based on a KCMO police code at the time, Combs says. “It features an armored-truck heist gone wrong and has become iconically known for masks the robbers wear to conceal their identities from each other. The opening title card is a shot of Union Station in its original state, which was the scene of the infamous Kansas City Massacre — a shootout between Pretty Boy Floyd and the FBI that resulted in four deaths, and captured the nation's attention.” 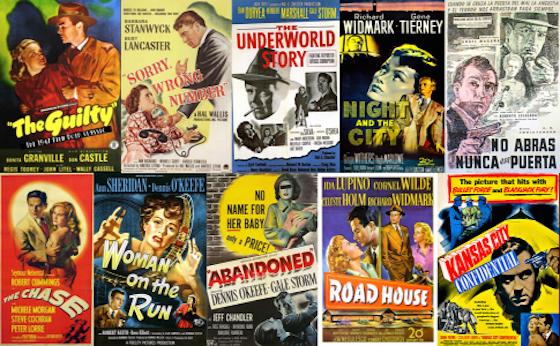 • “Sorry Wrong Number” (1948), a moody thriller starring Barbara Stanwyck and Burt Lancaster about a woman who overhears a murder plot.

• “Night and the City” (1950), a London-set potboiler from Jules Dassin featuring Richard Widmark as a small-time hustler and Gene Tierney as his long-suffering girlfriend.

• “Road House” (1948), another noir starring Richard Widmark, this time at his sadistic best as the owner of a bar/bowling alley caught up in a love triangle with tough and sexy Ida Lupino and hunky Cornel Wilde.

Three movies adapted from the fiction of hard-boiled master Cornell Woolrich will be shown. 1946’s “The Chase” is a home-from-the-war nightmare based on “The Black Path of Fear”; “Never Open That Door” is an 1952 Argentinian adaptation of two Woolrich stories; and 1947’s ultra-rare “The Guilty” adapts another Woolrich short story and is one of the newly restored prints.

The chase picture “Woman on the Run” and newspaper drama “The Underworld Story,” both from 1950, are the other two movies restored and printed on 35mm by the Film Noir Foundation. "Abandoned" is a 1949 noir about an underground black-market baby ring in Los Angeles.

“We're extremely fortunate to have a hosting venue in the Alamo Drafthouse who not only still has the ability to screen 35mm film, but also believes passionately in the mission and importance of these films,” Combs says. “It's a beautiful historic venue that makes a great setting for getting dressed up and seeing these films in their complete authentic beauty.”

Back this year for the festival is Film Noir Foundation founder and noted author Eddie Muller, who will host the screenings and be on hand for the weekend to discuss all things noir. Muller started the festival in his home of San Francisco in 2003, but has since branched for local versions all over the country. After Kansas City and the upcoming Washington, D.C. Noir City, it’s back to San Francisco for the 14th edition of the festival this coming January.

“2015 is on track to be a fantastic second year. I really hope this festival continues to grow and be embraced by Kansas City,” Combs says. “This area of the country has a vast history that's waiting to be tapped and I think far too often overlooked. I'm thrilled to be able to shine a little light on even just a sliver of it and bring it to people's attention.”

Full festival passes, as well as tickets for The Nightclub and individual screenings, are now on sale at noircitykc.com, and will also be available at the theater during the festival.