Posts tagged with The Apu Trilogy

With the lyric “Meet the new boss/Same as the old boss,” The Who’s “Won’t Get Fooled Again” might have been a good theme song for “The Hunger Games: Mockingjay, Part 2.”

It applies not only to the story of reluctant hero Katniss Everdeen (Jennifer Lawrence) and the citizens of Panem, but also to the dismal grinding down of this series, which winds up being as forgettable as its young-adult dystopian adaptation contemporaries, from “Divergent” to “The Giver.”

In 2012’s “The Hunger Games,” the conceit of pitting teenagers against each other in a fight to the death was already familiar (“Battle Royale”), but with 2014’s “Mockingjay, Part 1” and this dreary final picture, it’s clear that the reality-TV survival story was actually the strongest framework of the series. Without the outdoor adventure, heightened personal stakes and gaudy satire of the upper class, “Part 2” is left to hit the same tragi-romantic story beats again and again, while hammering home more really obvious messages about powerful puppet-masters.

Poor Jennifer Lawrence looks tired. In the opening shot, she’s struggling to talk after a choking incident with her maybe-I-will-maybe-I-won’t ex Peeta (Josh Hutcherson), who himself is recovering from some kind of mind control — one of many questionable plot devices. This throws the seriousness of the situation into focus as Katniss and her revolutionaries march on to overthrow Panem, but it’s undercut by an identical story beat when she’s soon shot — and immediately recovers — again. What’s worse, Katniss disobeys orders to avoid being a pawn, and escapes from her military troop, only to be immediately discovered and rejoin them —again.

Hutcherson doesn’t fare any better, hitting one redundant note after another, his do-gooder mentality now replaced by lots of woe-is-me, kill-me-now emo sneers, which maybe is meant to make him “deeper” and more attractive? Meanwhile, current boyfriend Gale (Liam Hemsworth) has little to do but let Peeta know he’s still into Katniss. I understand that YA books succeed by transposing real teen concerns into life-and-death fantasy situations, but any connection to the characters that existed by the end of 2013’s “Catching Fire” (the best of the franchise) has been stripped away by these plodding “Mockingjay” movies.

Like “Part 1,” the visual palette is more oppressive grays and browns. Katniss and crew are surrounded by concrete, whether it's underground tunnels or city ruins, and most of the “action” scenes involve silly booby traps, including a CGI oil flood that they escape by — wait for it — reaching an arbitrary higher ground and … waiting three whole minutes for it to subside. At least Katniss doesn’t black out in this moment, like she does at the height of several other action scenes.

“Mockingjay, Part 2” gets all “Return of the King” at the end, featuring at least three false endings, with character “revelations” that are all kinds of wrong. If they’re not already forgone conclusions (Donald Sutherland’s Snow, Julianne Moore’s Alma Coin), they are simply underdeveloped (Gale and the late Philip Seymour Hoffman’s Plutarch). Even Katniss’ big moment is robbed of its power because it’s so self-evident. Maybe this stuff was easier to pull off in the book.

Somehow, after a dismal 137 minutes to wrap up this series, I can’t help but be reminded of another song; this one by Peggy Lee and used recently on “Mad Men”: 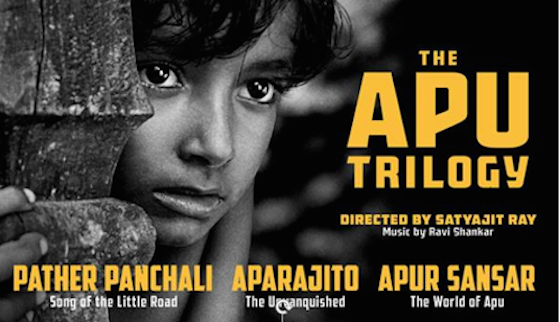 On March 30, 1992, just 24 days before his death, 71-year-old director Satyajit Ray accepted an Honorary Lifetime Achievement Oscar from his hospital bed in Kolkata. Archivists at the Academy who were working on a clip reel for the show were shocked to find few watchable prints of his hugely influential early films, so original negatives were transferred to a London lab to await restoration work.

Tragically, one year later, a massive fire burned the reels beyond repair. They remained untouched for 20 years until The Criterion Collection stepped in and began eight years of meticulous hand labor repairing the elements, finding duplicate negatives and masters, and rebuilding Ray’s masterpiece, the three movies that make up “The Apu Trilogy.” Now, the late 1950s film series that gained international success and brought Bengali culture to the world has literally risen from the ashes and is available on Blu-ray in a three-disc Criterion box with tons of extra features and historical context.

This is truly a cause for celebration. I’ve been reading about these films all of my adult life, but the only commercially available versions were fuzzy, scratched, and had poor sound quality. The Blu-rays bring Ray’s rich black-and-white images to stunning life and feature a crisp, 24-bit remastered soundtrack.

All three films feature naturalistic acting and beautifully symbolic subtext, but 1955’s “Pather Panchali” is the highlight. Set in a remote Bengali village in the 1920s, it is the template for all coming-of-age stories, especially ones that feature an inquisitive young searcher. Young Apu and his family are very poor and every day is a struggle, but the movie is bursting with life. Apu’s mother (Karuna Banerjee) is the rock that keeps things together, and Apu develops a strong bond with his older sister, as they dream of the world beyond the train tracks.

During Apu’s journey to manhood, he's played by four different actors. As he moves from big cities to villages and back again in the 1956 follow-up “Aparajito” and the last film “Apur Sansar” from 1959, his family slowly disappears and he must fend for himself. The setting changes with Apu’s fortunes (or lack thereof), and Ray’s camerawork becomes more advanced. Each film develops its own distinct personality—much like our own lives might be viewed, were we to look back at them as a distinct phases.

There’s a reason “Pather Panchali” won the Best Human Document award at Cannes before going on to be regarded as one of the greatest movies ever made. It is full of wonder and hope, and it resonates with aching authenticity.

By any measure of modern filmmaking, “The Apu Trilogy” is slowly paced and requires patience, but that patience is rewarded with time to savor the small moments and contemplate the timeless beauty of humanity. And as Ray proved in the late 1950s, that feeling cuts across all cultures worldwide. We’re extremely lucky to be able to experience these films, looking and sounding better than anyone has seen them in probably over 50 years.