“Unbroken,” the WWII drama directed by Angelina Jolie now playing at Southwind 12, is based on the best-selling nonfiction book by Laura Hillenbrand — which itself is based on the extraordinary story of Louis Zamperini, who died this summer at age 97.

The movie wants to be about courage and resilience, but it’s painted in so many broad strokes and tired clichés that it doesn’t quite register on that level.

The Hollywood sheen of its early scenes distances the film from connecting, while later attempts to be gritty become repetitive and ultimately deadening. It’s a triumphant story on the surface, but Jolie’s film never gets under the skin of its heroic torchbearer.

As a young Italian immigrant growing up in Southern California, Louis is constantly getting into trouble. Whether it’s from authority figures or bullies, he’s used to running away, so the only way for him to straighten out? He literally becomes a runner. Only, like every runner in Hollywood films, it’s not training that makes him faster, it’s his indomitable spirit — which he only conveniently turns on at the end of the race, for dramatic comeback’s sake.

Zamperini, the “Tornado of Torrance” (played as an adult by Jack O’Connell), is soon competing in the 1936 Berlin Olympics, but not before his older brother issues him a pair of on-the-nose lessons ("A moment of pain is worth a lifetime of glory" and, "If I can take it, I can make it") that will help him retain that spirit, even in the darkest of times. He’s going to need it.

The world is soon at war, and his B-24 bomber goes down in the Pacific, leaving Louis stranded in vast, shark-infested waters for 47 days.

It’s an incredible survival story to be sure, but as Jolie translates it to screen, it’s more like a highlight reel of life-threatening challenges, lensed with aesthetically pleasing widescreen framing by cinematographer Roger Deakins.

It may not be fair, but “Unbroken” suffers from comparisons to the impressionistic storytelling of Ang Lee’s metaphorical stranded-at-sea tale “Life of Pi” and the in-the-moment immediacy of J.C. Chandor’s “All is Lost,” starring Robert Redford.

As played by Japanese pop star Miyavi, The Bird is more than abusive — he’s a pervert who gets a sexual charge out of inflicting abuse. Miyavi’s characterization is twisted to be sure, but at least it sticks out more than any of Louie’s fellow POWs, who just fade into the background without any identifying traits. “The Great Escape” this is not.

Perhaps it wasn’t cinematic enough to portray the diseases and inhuman rationing that ravaged the camp, but this portion of the film — which lasts a good hour and has little forward movement — tries the viewer’s patience more than it puts us in Louie’s headspace. Top it off with a little Christ-like imagery, and it’s all too overbearing.

“Unbroken” is not without strengths entirely: The dogfight in the bomber is tense and claustrophobic, O’Connell is a magnetic screen presence, and Deakins’ shots are never less than beautiful, but the typical script — written by Richard LaGravenese and William Nicholson with rewrites from Joel and Ethan Coen — isn’t helped by a too–literal interpretation.

Zamperini’s later turn toward religion and his staggering decision to forgive and embrace his captors just five years later are mentioned in title cards, as addendums to a story not completely told. O’Connell does his best, but Louie never feels like a human being — just an unwavering symbol of strength who soars above normal people on a wave of superhuman courage. 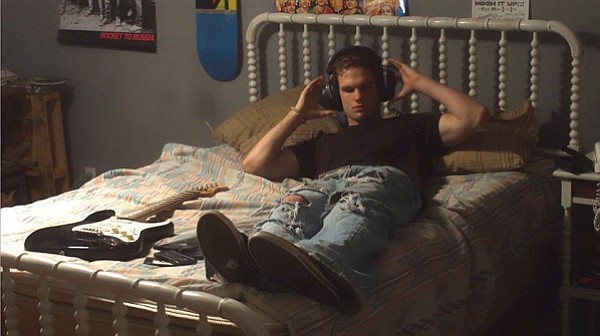 Writer/director Christopher Dorsey lived in Lawrence during the early-'90s heyday when “alternative” rock broke through into the mainstream. It was an exciting time. Our town was part of the national conversation, and you could see bands like Nirvana, Fugazi, and the Pixies at the KU Student Union.

His short film “Bitter Thing,” premiering at Liberty Hall on Dec. 29 during the Lawrence Short Film Showcase with three other shorts from local filmmakers, is a fictional story inspired by that moment in time.

That period was hugely influential on me as well, which is perhaps why Dorsey cast me in a tiny part as the drummer of a hair metal band on its last legs (awesome!) called Blackwood. When that band comes to Lawrence to record some new tunes, a talented local musician (Jake Hartley) with his own band is faced with the decision of a lifetime.

“The movie is really a throwback to teen movies from the '80s,” Dorsey says. “It’s not meant to be an accurate accounting of the Lawrence music scene from the early '90s. Lawrencians take that history pretty seriously.”

Dorsey’s film, shot in Lawrence and Kansas City, is headlining the four-film short festival, which will also feature recent works by local filmmakers Patrick Rea (“Good Conduct”), Joe Carey ("B and B”), and MacGregor Greenlee (“Harbinger”). It starts at 7 p.m. at Liberty Hall.