It’s Charles Dickens’ 200th birthday, and scholars and fans are remembering the author for his important contributions to the literary world.

Pop culture owes much to Dickens, whose complex characters and examinations of the underbelly of society have influenced everything from “Lost” to the Muppets.

Fans of “The Wire” will recall a newspaper editor’s plan to capture “the Dickensian aspect” of Baltimore in the series’ final season. The HBO series owes a lot to Dickens, though creator David Simon drew a clear delineation between comparisons of down-and-out Dickens characters and the street punks and drunks that told the story of Baltimore, which, as we learn through the arc of the series, is a circle that remains the same, even if the characters change.

“(Dickens) would make the case for a much better social compact than existed in Victorian England, but then his verdict would always be, ‘But thank God a nice old uncle or this heroic lawyer is going to make things better,’” Simon told Vice magazine. In Simonsonian Baltimore, the rich uncle is actually a drug kingpin.

In March, a fascinating story was published on The Hooded Utilitarian, “a quasi-blog/quasi-magazine hybrid devoted to cultural criticism,” examining the cultural contributions of a Victorian serial novel called “The Wire,” written by an author forgotten to time, one Horatio Bucklesby Ogden. 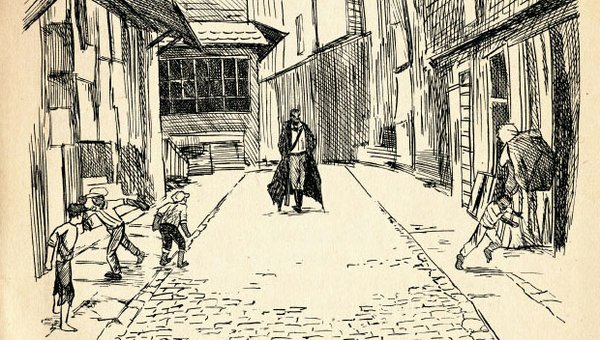 Of course, it’s an elaborate satire of scholarly takes on Dickens, but it’s a great read. A “Victorian masterpiece…forgotten and ignored by scholars and popular culture alike,” is how Joy DeLyria and Sean Michael Robinson describe Ogden’s novel. They write how “The Wire” was mass produced, and praised by intellectuals of the time, but failed to find large audiences.

The serial format did The Wire no favors at the time of its publication. Though critics lauded it, the general public found the initial installments slow and difficult to get into, while later installments required intimate knowledge of all the pieces which had come before. To consume this story in small bits doled out over an extended time is to view a pointillist painting by looking at the dots. …

Lastly, one might stand back from a pointillist work; whereas physically there is no other way to consume The Wire than piece by piece. To experience the story in its entirety, without breaks between sections, would be exhausting; one would perhaps miss the essence of what makes it great: the slow build of detail, the gradual and yet inevitable churning of this massive beast of a world.

Images of Ogden’s book – complete with etchings familiar to fans of Dickens’ novels – are included. 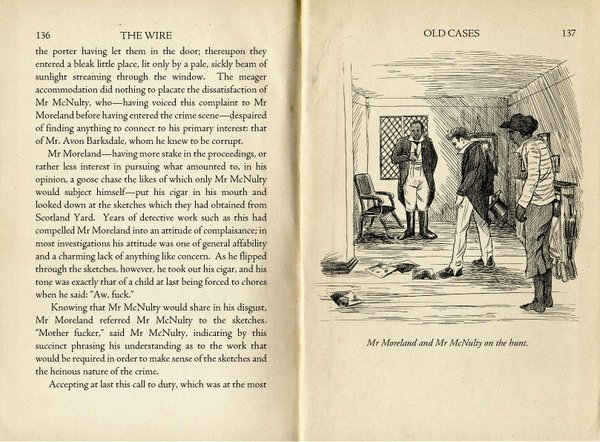 One passage describes a scene in which McNulty and his partner, Bunk Moreland, are examining a room for evidence of a murder:

Mr. Moreland – having more at stake in the proceedings, or rather less interest in pursuing what amount to, in his opinions, a goose chase the likes of which only Mr. McNulty would subject himself – put his cigar in his mouth and looked down at the sketches which they had obtained from Scotland Yard. Years of detective work such as this had compelled Mr. Moreland into an attitude of complaisancy; in most investigations his attitude was one of general affability and a charming lack of anything like concerns. As he flipped through the sketches, however, he took out his cigar, and his tone was exactly that of a child at last being forced to chores when he said, “Aw, f—k.”

Knowing that Mr. McNulty would share in his disgust, Mr. Moreland referred Mr. McNulty to the sketches. “Mother f----r,” said Mr. McNulty, indicating by this succinct phrasing his understanding as to the work that would be required in order to make sense of the sketches and the heinous nature of the crime. …

Or, as today’s HBO would have it:

DeLyria and Robinson have turned their analysis of Ogden’s work into a book, “Down in the Hole: The unWired World of H.B. Ogden,” available this summer.

One of the finest pieces of fiction in the history of civilization.