'Bob's Burgers Cookbook' a cure for those burger blues

The Fourth of July was a tough holiday for me. It’s not a lack of patriotism, if that’s what you’re thinking. It’s the barbecues. You’d think I’d have gotten used to not eating meat after so long, but man. Just thinking about some nice grilled hamburgers gets me ready to abandon a decade’s worth of vegetarianism.

Some people stop eating meat because they don’t like the taste. I am not one of them. Every now and then I see a commercial on TV for Wendy’s or something and it gets my mouth watering. Wendy’s.

I find myself in this predicament fairly often. My wife and I finally watched "Breaking Bad" in its entirety a month or so ago. Of everything in the show, that Los Pollos Hermanos commercial from season three is what has stuck with me longest. I’m not knocking the show; it’s great, it’s just that the chicken looked so good. Another show that tempts my carnivorous side is "Bob’s Burgers." Never in my life has a cartoon made me so hungry!

For those of you who haven’t watched, "Bob’s Burgers" follows the Belchers, a fairly functional family of weirdoes. There’s the dad, Bob, the brilliant cook, founder and namesake of the restaurant, and Linda, the optimistic co-owner and sing-a-holic. Together they parent three of the most wonderful children to grace the silver screen: butts-obsessed teen Tina, keyboard enthusiast Gene and their youngest, the street smart Louise.

The kids “help” their parents with the day to day of the restaurant while managing to get into outrageous situations big and small. Through it all they remain best friends, and somehow Bob, and especially Linda, are still proud and loving parents at the end of every episode.

One of the running jokes in the series is Bob’s “Burger of the Day.” Every episode we’re given a terrible, wonderful burger related pun — the I Know Why the Cajun Burger Sings, Sargent Poblano Pepper and the Lonely Artichoke Hearts Club Burger, A Good Manchego is Hard to Find Burger, etc. — and now you can actually try them. Written by the show’s creator, Loren Bouchard, and featuring Cole Bowden’s recipes, "The Bob’s Burgers Burger Book" will humorously teach you how to create 75 Burgers of the Day. Ever wonder how the Bleu is the Warmest Cheese Burger tastes? Wonder no more. 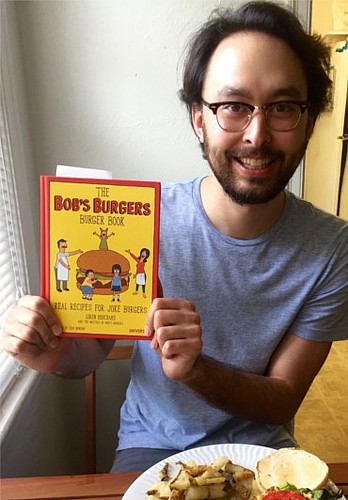 If you’re not vegetarian, that is.

Vegetarians aren’t completely left out to dry. We herbivores get three veggie options. The Rest in Peas Burger, the Mediterr-Ain’t Misbehavin’ Burger, and the I’m Gonna Get You Succotash Burger. For the sake of this review (and my own curiosity), I attempted the Rest in Peas Burger, and it actually turned out pretty well. In my experience, homemade veggie burgers can end up kind of mushy, but this one held together nicely and had a decent texture and taste.

My second go around, I added some diced jalapeños and a little bit of soy sauce, and I really liked it. If you can’t eat four burgers in one sitting, they hold up well after freezing so you can make a bunch and heat 'em up later. My wife tried out the Mediterr-Ain’t Misbehavin’ Burger recipe (eggplant, chickpeas, arugula and tzatziki sauce), and even though we both agreed that we would have preferred the eggplant patties to be baked and breaded, I ate three, so that has to count for something, right? 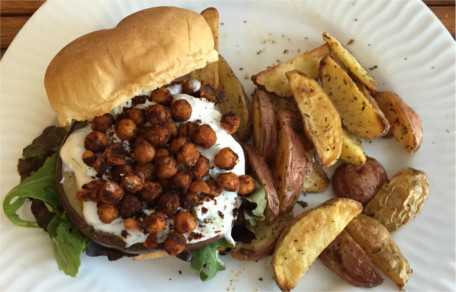 While I’m sure these new recipes won’t completely alleviate my carnivorous cravings, they have helped to sate my burgerlust. At the very least they’ll help me get through the summer cookouts. Thanksgiving, here I come.