Republish or perish: An interview with the Purple House Press

Back in third grade, my best friend hipped me to the wonders of Bertrand Brinley’s novel "The Mad Scientist’s Club," about a group of boys who float a mannequin over their town’s Founder’s Day celebration, construct a remote controlled “monster” in a local lake, and wreak further havoc with various other products of their tinkering.

Originally published in 1961, the book had gone out of print until a company called Purple House Press, which specializes in republishing classic children’s books, brought it back to life. Purple House Press has been one of my favorite discoveries in selecting children’s books for the library, and I was lucky enough recently to interview Jill Morgan, who founded the company 16 years ago.

DC: How did you get into the business of republishing out-of-print children’s books?

JM: In 1996 I quit my job as a software engineer to stay home with my two young children. I started collecting books over the internet, finding all the good old books I remembered from my youth. It was expensive, so I started buying and selling out-of-print books to fund my addiction! In the back of my mind was the idea of republishing them someday to bring the cost down, and it grew from there. I wanted people to be able to share with their own children the stories they grew up with. The catalyst was when my favorite book, "Mr. Pine's Purple House," was selling for $300 online. I wanted it to be affordable again so the story wouldn't die out. The book is about doing things your own way and not following the crowd. Mr. Pine actually seemed to be encouraging me to start Purple House Press. 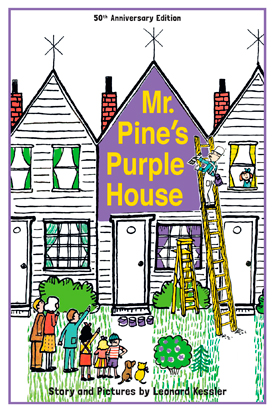 DC: How do you choose the titles you republish? Do you take suggestions? At the library we often wish to replace favorite titles, but can’t due to them being out-of-print.

JM: Many of our books were my favorites as a child, many have been suggested by customers and friends, the rest I've found by researching them on the internet. We're always open to suggestions!

DC: How has the children’s book world changed since Purple House Press began in 2000?

JM: The production side is much easier now, working with our printers, being able to FTP files and see PDF proofs as opposed to burning CD's and overnighting everything. E-books continue to grow but they are a small portion of sales. I personally like them and believe it's the way of the future, but I do hope people continue to buy print books for their kids to hold and interact with. When my son was 5 he went through a stage where he carried around a copy of "Mr. Pine's Mixed-up Signs" everywhere he went for weeks. He even slept with it!

DC: What are your best sellers and personal favorites?

JM: My personal favorite is "Mr. Pine's Purple House" for obvious reasons, and it has been one of our best sellers. A new personal favorite of mine is a book we're releasing this fall, "The Practical Princess" by Jay Williams. Written in 1969, it's the story of a strong heroine who slays the dragon and rescues the prince. Wish I'd had it as a child! "Miss Suzy," "Pickle-Chiffon Pie," "Miss Twiggley's Tree" and "The Chestry Oak" are other top sellers. A large portion of our sales are to the homeschool market; we appreciate our supporters there.

DC: What is it like working with people whose work was beloved, but runs the risk of being forgotten?

JM: The first book I wanted to reprint was "Mr. Pine's Purple House." Back in 2000 I sent letters to the author, Leonard Kessler, through several different sources, and he got them all on the same day. He called me immediately, was quite thrilled to be part of our venture and took a chance with us. He approved of the company name, too. Leonard was 80 years old at the time and never realized how much his little book meant to my generation. Now he does, and his license plate reads “MR P1NE.” He and his kids have said reprinting the Mr. Pine books brought both Leonard and Mr. Pine back to life.