I first discovered Charlaine Harris’ acclaimed Southern Vampire Mysteries (aka the Sookie Stackhouse series) while in college. At the time, I worked two jobs while finishing my bachelor’s degree, and I needed a vacation from the dense, academic drivel that consumed my evenings.

Following a recommendation from my mom, who is an avid mystery reader, I became immediately enraptured by Sookie’s paranormal world. It served as the perfect escape from my never ending to-do lists, beckoning deadlines and helped me fall in love with recreational reading all over again.

I not only devoured each of the books published at that point, but I also started my long-term relationship with the Urban Fantasy genre.

When I learned in 2013 that Harris planned a new supernatural series featuring prominent characters from her other mysteries, I couldn’t have been more excited. Imagine my dismay when "Midnight Crossroad" went on sale, and the internet became flooded with negative reviews. Against my better judgement, I decided to pass on reading "Midnight Crossroad" because I feared it would not live up to my expectations ... that is, until about a week ago. 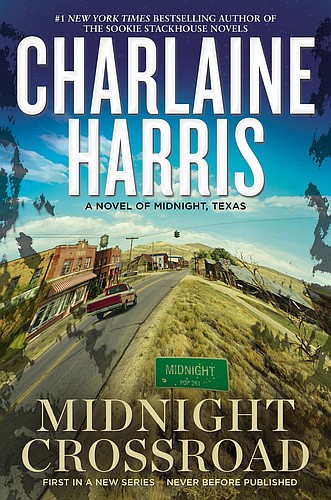 Even though I’m a little late to the club, I learned that "Midnight Crossroad" has been ordered as a new series on NBC. After seeing the trailer for the pilot, the hype became totally real for me as it brought me back down memory lane to when I first watched season one of "True Blood," one of my all-time favorite shows. I knew that I needed to revisit my initial misgivings about "Midnight Crossroad" and give it a read despite what the critics said.

The novel opens as the young and erratic online psychic Manfred Bernardo (from Harris’ Harper Connelly books) moves to Midnight, Texas, to go completely off the grid. Little does he know that the town of Midnight is full of individuals who wish to exist in anonymity like himself. There’s Bobo Winthrop, the owner of a local pawn shop that fans of Harris’ Lily Bard series will be sure to recognize, the rakish Lemuel who only comes out at night, the beautiful Olivia, who may or may not be a trained killer, Chuy and Joe, a gay couple who own an antique mall and nail salon, the introspective Reverend, and Fiji, a new age witch with a curious cat.

When Bobo’s missing girlfriend Aubrey is found dead, the Midnighters must band together to solve the mystery while truths simmer to the surface that threaten to reveal the deep rooted secrets they each possess.

Harris has a knack for crafting some of the most complex and relatable characters in fiction. Each of the town’s residents are shrouded in mystery, and there are so many underlying facets that make each of them feel like people you might know. And yet, none of the characters are who they claim to be, which results in a degree of peculiarity that keeps the residents of Midnight from fading into a mundane reality.

Following the unspoken rule of Midnight to avoid prying into business that isn’t your own, Harris employs a third person perspective that allows the reader to feel like an active member of the Midnight community. This evokes a rich world that could actually exist even with the presence of paranormal forces. Harris’ intricate worldbuilding and emphasis on character development is part of what makes "Midnight Crossroad" such an addicting read.

Although many won’t agree with me, I believe that Harris is a contemporary incarnation of Agatha Christie. She does an exceptional job of not only crafting an engaging mystery, but also pacing the novel in a suspenseful way that would make Shonda Rhimes proud (Any "How To Get Away With Murder" fans out there?).

I will warn everyone that "Midnight Crossroad" has a bit of a slow start, as it introduces its denizens in Dickens-esque, detailed glory, but the story takes on a relentless pace once the murder victim is discovered. Even if I didn’t guess the killer correctly, reading "Midnight Crossroad" was one heck of a journey. It had me wanting to reread the novel to see if I could discover the subtle trail of breadcrumbs Harris left for readers to follow.

If I’ve learned one thing from this experience, it’s that life is too short to read what critics recommend or society discerns as “quality literature.” From now on, I plan to follow my gut, read what I want, and I’ll decide how I feel about it instead of forming an opinion based on the critiques of others. Are you in the mood for a gripping mystery with supernatural flair and a touch of camp? Then give "Midnight Crossroad" a chance. If it isn’t your cup of tea, there are plenty more books in the proverbial sea.