What would Alfred read? A failed summer reading challenge

In the summer of 2011, I came up with the perfect challenge: read at least one title by each of the winners of the Nobel Prize in Literature since its first awarding in 1901 and blog about my thoughts and reflections. I had the best title for my blog too: What Would Alfred Read? (The Nobel Prize is named after its Swedish inventor, Alfred Nobel.)

I had just finished library school, and I figured I’d have all this free time. I also thought, as a librarian, it would be important to be well-read. What better reading list could there be? But I only made it to 1904 ...

What I didn’t realize: It takes a little bit of an effort to track down works of early Nobel Laureates. Did I set a time frame for completion? Nope. No way. There were 107 Nobel Laureates then, and I had no idea how long it would take me to find and read each chosen title.

The trouble started with the first recipient, Sully Prudhomme. As a French poet, Mr. Prudhomme understandably wrote poems in French. I have never learned to speak or read French. What's the big deal? Why not find an English translation? A quick search on WorldCat.org (an awesome catalog of holdings of libraries around the world) proved that even a French volume would be difficult to get, as the closest libraries with Sully’s titles are few and far between, if not across the ocean. 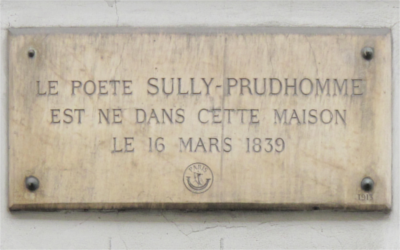 In the end, I found a few of Sully’s poems in English through Google and called it good. Of the three other laureates I read, two of the titles I had to borrow through interlibrary loan. One was actually available at LPL, "The Provinces of the Roman Empire: The European Provinces," but it wasn’t exactly a light summer read (it’s since been withdrawn from the collection). This was going to take me forever. What I imagined to be a daunting task ... actually was.

I learned quickly that it was OK to put aside — and even let go of — a challenge. My To Be Read pile was large enough as it was. There were other things I wanted to read — much more exciting and interesting things (to me). My Nobel challenge was a time consuming and intimidating endeavor. I’m all for expanding my literature horizons, but not at the expense of missing out on the fun stuff too.

This year, I’m keeping my summer reading simple. I just checked out David Foster Wallace’s 1079 page tome, "Infinite Jest." I expect to be finished by summer of 2017 ...