"Letters to a Young Farmer": On food, farming, and our future

Not emails. Nor tweets. Nor texts. Letters. The kind you thought people didn't write anymore. And not to friends or family, either, but to that steadfast and necessary minority that will save the world, if given the chance. I'm speaking, of course, of young farmers.

Most of these young farmers haven't grown up in farming communities, and certainly not within a farming culture. Here in Kansas, farm numbers decline steadily as farm size and farm debt grow, trends that reverberate throughout the land. What is a young farmer searching for inspiration and advice to do?

I know one answer to that question, and I'm happy to report that some beginning farmers and farmers-to-be also know it: attending the annual Prairie Festival at the Land Institute in Salina. There, farmers, cooks, thinkers, writers, policy-makers and all manner of like-minded individuals and organizations gather every fall for a weekend of agrarian conversation. For those few September days, the collective level of knowledge and inspiration surely rises above any other gathering in the state.

If you're a regular, you've heard and met a great many of the writers who appear in "Letters to a Young Farmer: On Food, Farming, and Our Future," a collection by the esteemed Stone Barns Center for Food and Agriculture. And if you're not familiar with the Land Institute, well, you're in luck, because this book is like a Prairie Festival in your living room, without the wind. Dozens of well-known yet down-to-earth agrarians are gathered in one place, and they're talking to you. 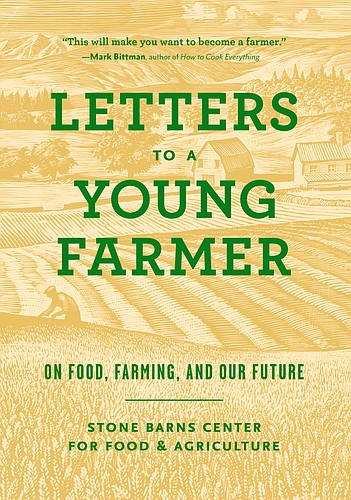 I was drawn to "Letters to a Young Farmer" by its brief appearance in "Look and See: A Portrait of Wendell Berry," shown recently at Liberty Hall. Berry naturally has a piece in the book, and it's remarkable, yet altogether understandable, how many co-contributors mention him as inspiration.

The letters take many forms, from short and heartfelt notes to how-to lists, historical surveys, political manifestos, economic primers, ecological cogitations, advice columns and reminiscences. Some are serious, some are funny, some are a little overwhelming. All are sincere. No matter the tenor, I was glad to get a chance to read what many of my heroes and heroines have to say, as well as get acquainted with some new names.

Gary Nabhan, an amazing farmer/teacher/writer, feels bad for previously neglecting farmers, though I detect a hint of false modesty. "May you plow in peas," he concludes. Mas Masumoto, a California peach grower, says that pruning his trees taught him a valuable lesson: "When you farm, you have to learn how to see the future."

Michael Pollan bows to Berry, placing the new generation of farmers along the line that runs from Sir Albert Howard to the present, reminding me of the talk Berry gave in the Land Institute's then-new greenhouse some thirty years ago. Chef Alice Waters, drawing tasty connections from farm to fork, reminds us that farming is 85 percent of cooking.

Some new heroes and heroines include Dan Barber, a writerly gourmand who I've somehow missed. His letter proves that an award-winning chef can also be a master storyteller. Raj Patel is an activist and writer who has taught "Edible Education" with Michael Pollan, which sounds like my kind of class. Patel quotes Rilke, author of Letters to a Young Poet, and urges young farmers to look to the source of life.

Almost as if they realized that many of the missives in Letters to a Young Farmer included serious strings of (well-meaning) imperatives, the editors close the collection with Berry’s best-known poem, the lighthearted and cantankerous “Manifesto: The Mad Farmer Liberation Front.” One imperative leads to another for 57 lines, ending in “Practice resurrection.” My favorite advice to any young farmer, or anyone else, can be found on line 38:

"Be joyful though you have considered all the facts."