"Atlas of a Lost World": a new read on old life across the world

The rains became unpredictable, societal chaos threatened, and so they walked. Nearly a thousand years later author Craig Childs also walked, trying to follow their slow migration from Mesa Verde to Chaco Canyon and on south to the Sierra Madre. "House of Rain," published a decade ago, is one of my favorite books by one of my favorite authors, exploring one of my favorite areas. You can't hardly beat that.

Unless, of course, you publish a collection of pieces about the many critters you've encountered on your mostly Southwest rambles, adding a lively layer to your already awesome back-county historical travelogue. You might call such a collection "The Animal Dialogues," as Craig Childs has done. That would be hard to beat.

Unless ... unless you walked in the footsteps of the really ancient ones, moving across incongruous landscapes as you tracked the very earliest humans to journey into the Americas. You would of course also encounter animals, terrifying animals, familiar yet different. Huge. And fast. That book might be unbeatable.

Think of it — the Pleistocene West Coast was 400 feet lower than it is today (since so much water was tied up in glaciers that sat like continents on top of continents), so a kayak might come in handy. Inland, you'd be traversing glaciers and ice fields, so you'd perhaps rig up a dog sled — and who knew those dogs would prove to be rather excellent hunting companions in the years to come? As for ice-age animal dialogues, you would have to rely on your imagination. Good thing, too, for conversations with the short-faced bear, American lion, mammoth, saber-toothed cat, or dire wolf might be rather short.

On the other hand, you’d be with family and friends, carrying a practical and proven toolkit. Though the lands and animals would be new, you’d be old hands at hunting and migration. (The indescribably massive floods that raged as the glaciers melted, though … no one could be prepared for those. Their memory would live on in the myths and religions of cultures across the land.) 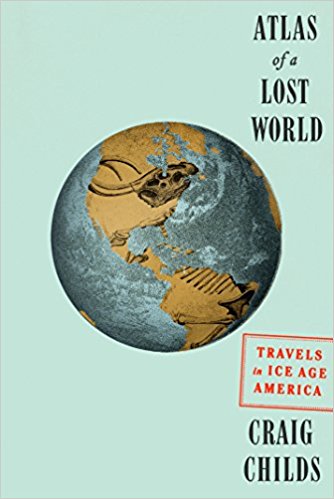 Craig Childs' new book is called "Atlas of A Lost World," and, no surprise, his time-traveling compares favorably with his place-traveling. Before you know it, you’re in the company of mammoths, walking across the Bering land bridge.

By the way, the Bering land bridge was not a narrow bridge between Russia and Alaska in the Golden Gate or Brooklyn Bridge sense. It was wider than Alaska, nearly the girth of what’s now the Lower 48 between Chicago and New Orleans. Childs calls Beringia a lost continent, one not unlike the 19th century Great Plains, sunny and grassy and teeming with animals.

There was also a highway stretching 22,000 miles from Japan all the way to Baja–the so-called Kelp Highway. It was along this route that early mariners may have come to the Americas. Not only that, there was an Atlantic land bridge, stretching from the British Isles to New York(!). Jumping ahead a little bit, might it be that the famous mammoth-spearing Clovis points came over from the Iberian peninsula? They were developed on the east coast, after all, then spread west.

To his credit, Childs doesn’t pretend to know the answers to puzzles like this, and there are many indeed in the hazy past of American settlement. Over the years, I’ve tried to keep up with latest discoveries and theories of human arrival in North (and South) America, but the "Atlas of a Lost World" is loaded with new information, refreshingly presented in an educated “consider this” style that is comfortable with not knowing all the facts.

Short-faced wolves in Bonner Springs. Evidence of “bone crusher” culture in north-central Kansas, from a time when no one was thought to be there. Childs keeps the reader engaged as he travels from ancient site to ancient site, despite all the surprising and sometimes conflicting evidence that’s been unearthed.

This much is certain: people (with brains larger than ours) came from different places at different times, and moved all over. As Childs says, “Paleolithic America was never a monolithic culture, it was always many cultures.”

— Jake Vail is an information services assistant at the Lawrence Public Library.