Posted by Lawrence Public Library Staff on June 14, 2016 at midnight

My Body, My Canvas: Tattoos of Literature

I got my first tattoo last year when I was 63: a semi-colon; yes, I’m a great fan of grammar and, unlike Kurt Vonnegut, I believe semi-colons are useful and fun to deploy, but that’s not the reason I had a semi-colon tattooed on my finger.

The reason I had a semi-colon tattooed on my finger is because of what the semi-colon implies, namely, “There’s more to come.” I feel this is a useful thing to keep in mind as I navigate the second half of my life. 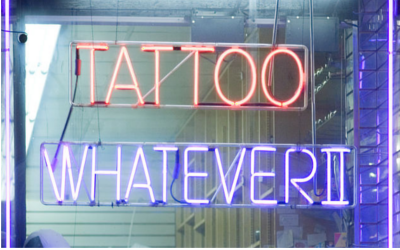 And, naturally, this got me to thinking about tattoo-related moments in books, TV and film. Here are a few that spring to mind. Feel free to add your own.

Every tattoo has a story behind it, and nothing proves this better than "The Illustrated Man," by Ray Bradbury. The sci-fi stories in this collection all spring from the ink that covers the skin of a man the narrator meets along the road. Each tattoo comes to life to tell its story and the stories are, of course, pure Bradbury — vivid, engrossing, imaginative and original.

I’d heard that tattoos are addictive and have discovered that this is, in fact, true: you get one and you want another and another and another. "Until I Find You," by John Irving, tells the melancholy story of a woman tattoo artist and her son as they travel the globe searching for the boy’s father, a guy who is hooked on tattoos. In this book, Irving suggests that a sleeve of tattoos makes your arm feel cold. I’ve checked with a few massively tattooed people and they tell me this is simply not true. John Irving’s writing style — especially in his post-Garpian work — is a bit too much like John Irving trying to write like John Irving, but the look at the tattoo artist’s world is fascinating.

Getting that first tattoo can be a big step even if you’re not a 63-year-old neurotic Jewish woman from Long Island. This could be why some people make a deal with a friend to go under the needle together, but the deals don’t always work out as planned. In Season 6, Episode 10 of "Modern Family," Haley wants a tattoo for her 21st birthday and, with a little encouragement from Gloria, Clare decides to make it a mother/daughter moment. But, of course, Haley changes her mind and only Clare gets inked. The same thing happens to Rachel in "Friends" when she and Phoebe visit a tattoo parlor to get inked together but only Rachel is brave enough to follow through. Happily, Ross finds it incredibly sexy.

In terms of the Miller Analogy Test, tattoos of tears : gang members, as tattoos of knives : Kirsten, a member of the traveling performing arts troupe in the post-apocalyptic tale told in the book "Station Eleven," by Emily St. John Mandel. They are less about sheer art than about letting people know how tough you are. Kirsten’s tattoos indicate just how many people she’s had to kill to survive. Be afraid. Be very afraid.

And, finally, looping right back to old age, we have Lily Tomlin’s character, Elle, in the movie, "Grandma." The movie itself is predictable and underwhelming but we are not here to criticize the film. No. We are here to talk about tattoos and the tattoo scene is pretty fabulous. How can it not be when the tattoo artist, Deathy, is played by Laverne Cox? Though Elle sports quite a number of tattoos from her radical lesbian youth, she doesn’t object to accepting ink in lieu of the cash Deathy owes her but does not have.

OK. I’m off to the tattoo parlor. Who’s with me? Oh, come on. It doesn’t hurt THAT much.