I'll have to admit first off that I had a severe case of election distraction this year. Much of the free time that's typically devoted to poring over music sites and going to local shows shifted to compulsive political nailbiting - but as is the case seemingly more so every year, there is an impossible amount of interesting, smart new music out there. An intimidating amount - I'm not sure anyone without his or her own small army of music nerds on call can really dent into it. I don't see colossal growth of internet radio, music criticism and blogging, or the crazy array of music devices approaching any kind of slowdown in the forseeable future. Other than by perhaps measuring sales (which only says so much anymore), the variety of places from which we can learn about music inevitably to me means that with a few exceptions any age of consensus on a universally revered album has gone the way of Freddie Mercury. Radio listeners aren't likely to be interested in what the long-winded English majors over at Pitchfork are going to think about Kanye West, and any of the billion bloggers in the web ether likewise isn't going to give much screed to Rolling Stone. It's hard to see crowds not becoming more insular.Information overload isn't necessarily a good or a bad thing - it has just forever altered the way we listen. Most of the time I think it's for the better. People are generally way more invested in something they feel that they discovered, and hopefully at some point that can financially benefit the people that create the music. Fingers crossed.Anyway, more or less like last year here are the handful of records that I kept returning to, and there are no local acts here. There were some really excellent local records this year - I just think my bias towards them doesn't really mesh too well here - plus, there are a bunch of acts I really need to get off it and go see for the first time. It's December.. I spose I can finally turn off the Olbermann now. A few honorable mentions: Frightened Rabbit - Liver! Lung! FR!, Santogold - Santogold, Tapes 'n Tapes - Walk it Off, Hercules and Love Affair - Hercules and Love Affair, Wild Sweet Orange - We Have Cause to be Uneasy, Blitzen Trapper - Furr, Mogwai - The Hawk is Howling, Passion Pit - Chunk of Change, Alejandro Escovedo - Real Animal.10 Dr. Dog - Fate

Dr. Dog was sort of an outlier at Wakarusa - a much better fit later in the year at the Record Bar along with Delta Spirit. This Philadelphia band's scratchy '60s blues is dark, sweaty and fun. And according to the video for "The Ark", bloody:9 Fleet Foxes - Fleet Foxes 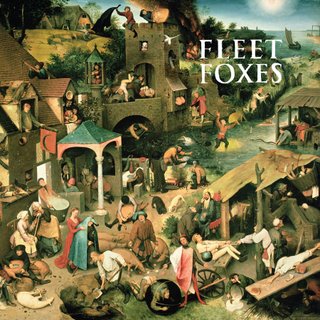 He is so weird. Weird-looking, everything. But he doesn't sound like anyone else - his slurry flow sounds unique, natural and easy whether or not he's rushing through or hanging on to each syllable. And he's funny. Plus, anyone that gives away as much music as he does for free every year and also has the ability in this age to be able to actually sell millions of albums on top of it must be doing something right.7 Girl Talk - Feed the Animals

300 hit songs from all over the genre map mashed down into 17 sounds kind of nightmarish, but Greg Gillis is a capable master. See how many samples you can name:6 The Helio Sequence - Keep Your Eyes Ahead

Super solid ultra-hooky, new-wavy Northwest guitar rock. Not terribly impressive at first listen, it's a smart, total sleeper that has been in constant rotation all year. 5 Devotchka - A Mad and Faithful Telling

Devotchka is strangely sweet and moving, especially considering the ultra-eclectic mix of accordion, strings, theremin and sousaphone that go into the wonderful Mexican gypsy whatever you'd call it do.4 MGMT - Oracular Spectacular

A bunch of kids writing a really vibrant record about wanting to be kids. It's hard to write an album this dancey without a few duds, but they cough managed it.3 TV on the Radio - Dear Science

Only a handful of bands can consistently put out a set of such varied songs that are as brainy and exciting. 2 Bon Iver - For Emma, Forever Ago

The prettiest, most haunting album I have bought in years - the result of months spent holed up alone in a Wisconsin cabin.1 The Dodos - Visiter

The most returned-to, enjoyable album I've gotten my hands on in 2008. It doesn't sound like all of this sound could come out of just two principle musicians, but incredibly agile talent-on-steroids apparently makes up for any lack of extra hands. What'd I miss this time?

Been out of the loop myself this year, so this was fun to check out, and seemingly a pretty good list -- I found stuff to like with most of these. Of course TVOTR has been on my "to buy" list since Dear Science came out. What bits I've heard (including the above) have been fantastic, but they're nothing if not consistent.I read something on the NPR All Songs Considered blog about the worst ever band names. Two of them made your list: Dr. Dog and the Dodos -- and I kind of like both names. And I dug Dr. Dog quite a bit. May explore them further. The Dodos are interesting, but I kind of have a knee jerk reaction against the precious folkie stuff. But they have a pretty unique sound, so I might not write them off just yet. My reaction to The Helio Sequence seems the opposite of yours. It sounds very catchy and yes, new-wavy (delay pedal!). I guess I got a little burnt out on that sound with Bloc Party. They sound really good at first and they know how to write a hook and put it to a dancey beat, but that general type of music tends to wear out on me pretty quick. Too slick, not a lot of depth that I can hear. A bit whiny. Again, my knee-jerkiness. Had I not checked out on pop music about two years ago (been busy rediscovering old treats for the most part -- sure sign that I'm on my way to being an out-of-touch old fart), I would probably be sick of bluesy garage rock and would turn up my nose at Dr. Dog. So my two cents may not mean much.

Oh, there was one new non-KC/Lawrence discovery for me this year: Vancouver's Ladyhawk. They are sometimes criticized for borrowing a bit too much from Dinosaur Jr. and Neil Young -- and I could certainly see how they would come to that conclusion. But I still think they have their own flavor, and they're fun when you feel like some gritty, sloppy rock and roll. A taste: http://www.myspace.com/ladyhawk

"What'd I miss this time?"The new Blak Oak Arkansas album.Wait.What year is this?

They are kind of dumb names - but I sympathize with people that have trouble with good titles...

Thanks for the find on Bon Iver.How about the consummately entertaining Vampire Weekend? Or the vivacious Ting Tings?

Vampire Weekend should probably have gone in the honorable mentions category. The Ting Tings did have that super catchy dance song 'great dj', but i never was really tempted to look much further. Seemed one hit wonder-y. Worth it?

April, I finally got an l.com account just so I could add The Walkmen - "You & Me"And F-----d Up - "The Chemistry of Common Life"And I know you don't like them, but the new Hold Steady is better than the last one, worse than the second one, and tied with the first one (which makes it pretty good).And I know it was just an EP, but Animal Collective's "Water Curses" was awesome.And if the rest of Sigur Ros' newest was more like the first track it would've been the album of the year.And I know it came ou

April, thanks for posting the videos. I never seem to search them out. The Helio Sequence's video was awful cute. Check out the Ting Tings! They have a couple other excellent singles like "That's Not My Name." They also have a good session on daytrotter.com.Here's a couple more:Department of Eagles "In Ear Park"Cut Copy "In Ghost Colours"M83 "Saturdays + Youth"

nice work!I would like to mention a couple of albums that made more waves than any other that know of especially in europe in 2008: Modeselektor - Happy Birthday and Kraak & Smaak - Plastic People

Actually, I completely forgot an album that didn't leave the player forever. It belongs at #4, move the others down accordingly. 4. Eddy Current Suppression Ring - Primary Colours