Kawehi shares about life since viral cover, excitement to play in Lawrence 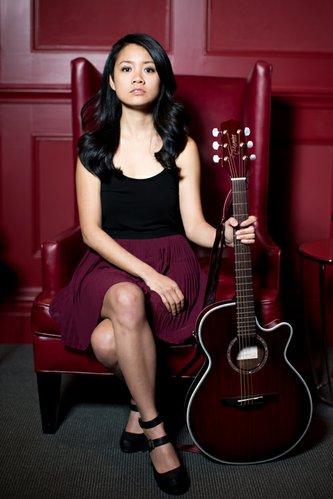 Kawehi will play her first show in Lawrence since her Nirvana cover went viral at The Bottleneck at 9 p.m. on Saturday. by Nadia Imafidon

For some Lawrencians, Kawehi came out of the woodwork. Vimeo selected her cover of Nirvana’s “Heart-Shaped Box” as a staff pick and suddenly everyone (Esquire, Elle, Spin, etc.) wanted to know about the DIY one-woman band with a signature looping style, singing and beatboxing skills.

Especially in Lawrence. All publications were giving our town a shout out for her location and most of us had yet to see her play any local venues.

That changes this Saturday night at The Bottleneck. The concert is at her request.

“I really just wanted to get one in at the end of summer, like ‘hey I told you guys I was going to get one in so here it is,’” Kawehi says laughing.

Since her Kickstarter campaign was funded at more than 900 percent, Kawehi put out her third EP “Robot Heart” in July and started touring the world to perform for sold-out crowds. She was off to a private party (described as a “hush-hush” event) in Brazil hours after the phone interview with the Journal-World.

“It’s all kind of a first for me,” Kawehi says. “I’m used to being paid in beer to play crowds that are there to drink and not specifically to see me.”

Despite putting out “Robot Heart” independently, sales have been amazing, she says. Kawehi never expected to sell out of the first shipment of copies, and she is already ordering more.

On the EP, she tunes into her sci-fi buff side as she explores the world from the perspective of a robot. Kawehi recently released a new video for single “Anthem” that reminds human beings that we can choose be positive and to make positive decisions even when things feel out of control.

“You get tired of writing stuff about yourself,” she says on the theme. “You want to come from a different place and try something different.”

Her husband has filmed her work for two years now, so Kawehi says she is lucky the Nirvana cover blew up when it did because she had a stockpile of other videos to back up her talent.

“It feels really good to not have to just eat ramen anymore or just try to survive and pay the bills. This is what we were hoping for. To have this life where we can just make music all day.”

Watch her live at 9 p.m. this Saturday as she layers various vocals, keyboard and guitar parts and, of course, beats in front of the entire audience. Her set incorporates all the covers that made us fall hard for her, in addition to her original work on “Robot Heart.” Tickets are $9.

“I like to create everything in front of you,” she says. “And it will be a wild ride, I promise.”