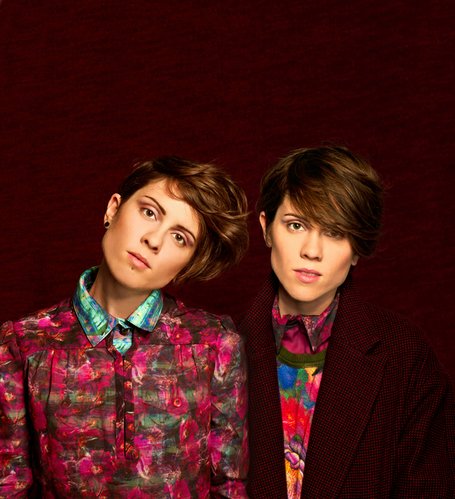 Tegan and Sara will play Liberty Hall, 644 Massachusetts St., on Wednesday for their Let's Make Things Physical tour. Tickets are $35 in advance. by Nadia Imafidon

As part of the Hispanic Heritage Month Festival in Lawrence, musicians from the Kansas City jazz and Latin scene are offering up three hours of salsa music to make you move at Five Bar and Tables. Juego Estandar is the featured band, so even if you’re too shy to leave the confines of your chair, it’s likely the dynamic rhythm sections courtesy of Miguel "Mambo" Deleon, Pat Conway and Bill McKemy will have you grooving in your seat, if not wooed to the dance floor. Bring a partner, or find one when you arrive. Guaranteed, your hips won’t lie. If they leave you wanting more, head to The Eldridge on Friday night for free tango lessons. 7 p.m. Thursday at Five Bar and Tables, 947 Massachusetts St.

Harry and the Potters

If you love Harry Potter and you love punk rock, you’re going to want to check out this band on Final Friday. Playing at Wonder Fair’s newly renovated patio, Harry and the Potters will sing about the trials and tribulations of growing up a wizard orphan world-savior. In case you haven’t picked up on it yet, the duo, Paul and Joe DeGeorge, who pioneered the “wizard rock” music genre write music about the Harry Potter books.

Hailing from Massachusetts, they’ve released three albums to date, their second beautifully entitled “Voldemort Can’t Stop the Rock.” The brothers also co-founded the Harry Potter Alliance, which is an organization that uses the Harry Potter books as a platform for inspiring real-world activism. À la Poupée and the Chine-Collés will join the Potters, celebrating the release of their first full-length album. 7 p.m. Friday at Wonder Fair, 803 Massachusetts St., free.

Twelve years after Interpol’s breakthrough album “Turn On the Bright Lights,” the moody New York rock group earlier this month released a highly anticipated fifth album, “El Pintor.” Anyone concerned with the loss of bassist Carlos Dengler and the recent four-year hiatus of Interpol can rest easy; they haven’t let these setbacks show. The now three-piece channeled its original sound with more polished, gloomy, post-punk guitar lines than ever before. It seems the members just needed to revisit the basics and reconnect with their roots to remind themselves that it’s their brood-punk sound that put them on the map in the first place. 8 p.m. Monday at Granada, 1020 Massachusetts St., $25.

The Quin twins Tegan and Sara are coming to Liberty Hall on Wednesday for their “Let’s Make Things Physical” tour.

Originally bursting into the Canadian music scene in 1998, this month marks the 10-year anniversary of their commercial breakthrough album “So Jealous,” the moody new wave record with gems “Walking with the Ghost” and “Where Does the Good Go.” Fans who jumped on board because of their recent electro-pop hit “Closer” and emo faithfuls from the band's early acoustic days have a reason to come together on this night. (This rarely happens.) 8 p.m. Wednesday at Liberty Hall, 644 Massachusetts St., $35.

Other live shows of note: