Now that the Spencer Museum of Art at Kansas University has finally reopened after its water-main induced closure, visitors will be greeted by someone new.

She goes by “Sophie.” 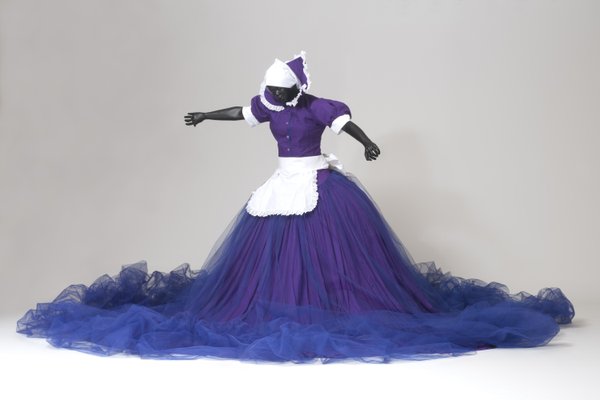 Sophie-Ntombikayise is a larger-than-life sculpture by 29-year-old Johannesburg, South Africa, artist Mary Sibande. Sophie was scheduled to go on display last weekend in the museum’s center court, but the Aug. 1 water main break kept the museum closed until Tuesday of this week. (Note: Although the museum’s art objects and galleries escaped unharmed, unfortunately 15,000 to 20,000 books from the Murphy Art and Architecture Library in the basement were damaged.)

I got a peek at Sophie earlier this summer, when she was waiting in the wings for her debut. Even in a dimly lit temporary gallery, where she was stored with other art objects on their way into or out of display, she was impressive.

Sophie culiminates Sibande’s series of sculptural installations featuring four generations of women in her family, all of whom worked as domestic servants, according to the Spencer. It’s the first work in a U.S. museum collection. 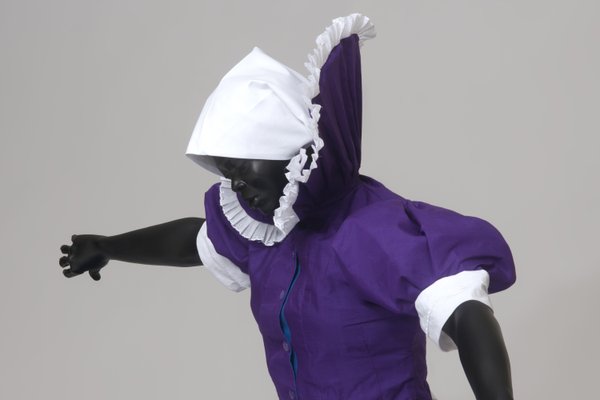 The figure’s skin (formed in cast resin) is onyx-black, with down-turned face and slightly contorted, outstretched arms. Her size and skirt, however, stuck with me most. Sophie is pushing 7 feet tall, and her vivid purple and blue dress has piles and piles of billowing tulle that roll onto the floor in a circumference wider than her height.

The “wonderfully overblown” gown is meant to be an artificial hybrid costume of a maid’s uniform and regal Victorian dress, the Spencer’s exhibit announcement explains. Through Sophie, the announcement says, the artist addresses the traditional role of black women in South Africa and other countries where there’s a history of black servitude.

Did I mention Sophie is larger-than-life? Here’s a link to photos, but this piece is among those that are, without question, better — to scale — in person.