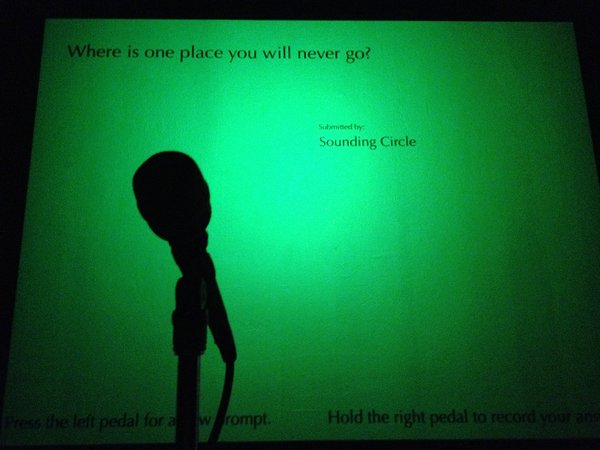 "Sounding Circle," an interactive audio exhibit, is on display at the Spencer Museum of Art until Sept. 30. by Sara Shepherd

Three new exhibits opened at the Spencer Museum of Art this week. In one of them, you — your thoughts, your voice, your tweets and maybe even your ringtone — become the art in real-time.

Audio artist Jason Charney’s “Sounding Circle” is in a small, darkened studio on the first floor. After pushing aside the black curtain, you’ll see a projector screen with a question and a microphone — and that’s pretty much it. You’re supposed to answer the question, recording yourself by pressing on a foot pedal. As soon as your answer leaves your lips, you’ll begin to hear it resonating, repeating and fading in and out around you — interjected with white noise, other sounds and blips from previous visitors.

If you go, you may hear a distorted-sounding me saying “The North Pole” (Where is one place you will never go?) and something like, “Finally getting out of the house and on my way” (What’s the best part of your morning routine and why?). As the exhibit played back my answers Friday, a strange guy’s voice popped in to add comments like, “Ancient things” and “I’m an Aquarius.” It’s pretty cool, and I’m guessing after the exhibit’s been up more than a day, there will be even more voices.

You can even submit questions via Twitter — just add the hashtag #soundingcircle when you tweet. (Pssst: If, “Is this really art?” from @KCSSara shows up on the screen, then we’ll know it works — and that the Spencer staffers moderating questions approved mine.)

“Sounding Circle” is meant to foster dialogue and reflection,” the Spencer explains. “By hearing their own words repeated and changed, participants consider their responses closely as their voices become less a vehicle for content and more a generator of music. As they stand and listen in the Circle, they connect with others who have also wandered into its space.”

Charney, an acoustic and electronic media composer, graduated from KU this year with a bachelor’s of music degree in music composition and theory. This fall he’s headed to the Peabody Institute of Johns Hopkins University to pursue a master’s in composition and computer music.

“Sounding Circle” will be up until Sept. 30.

“Politics as Symbol/Symbol as Politics,” curated by KU political science professor Burdett Loomis, in the 20/21 Gallery (one of the open-air spaces inside the modern art gallery on the second floor). Works include one of Jasper Johns’ flag series, video of political advertising and a vote-for-Bob Dole poodle skirt from his 1962 campaign. Timed to coincide with this year’s presidential campaign, it’s up until Jan. 27.

“The Ray of Hope: Aaron Douglas-inspired Quilts and Murals,” in the first-floor Lobby Gallery. Lawrence quilt artist Marla Jackson led a project in which children created colorful quilt blocks inspired by Aaron Douglas and the Harlem Renaissance. The exhibit is scheduled to be displayed until Sept. 16.