Fact: Some glass pipes are fancier than others.

And a good number of folks who create the fancy variety would prefer their work be called art instead of just, you know, paraphernalia. 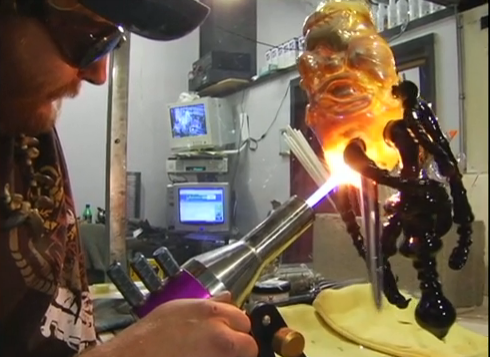 A screenshot from the trailer for "Degenerate Art," a documentary on glass pipe-making. by Sara Shepherd

At 7 p.m. Nov. 16, the Lawrence Arts Center, 940 New Hampshire St., is screening a documentary titled “Degenerate Art: The Art & Culture of Glass Pipes.” The film explores the culture of glass pipe-making from the origins of Bob Snodgrass’ famous “color-changing” pipe to what filmmakers describe as the “radical emerging art movement it has become today.”

The trailer includes video clips of pipe-makers with torches and their completed Chihuly-esque glass creations — multicolored, sculptural, elaborate and in some cases a yard or more tall. It also includes shots of pipe-makers being arrested in a paraphernalia sting several years back, which of course the film decries.

“This subversive art challenges our right to free speech and expression, as well as reflecting the nature of the people who make and collect the pieces,” says the film’s synopsis. “One of the last true underground American scenes, glass pipe art remains invisible to mainstream culture.”

And, for the trailer and more on the film, the “Degenerate Art” website: www.degenerateartfilm.com