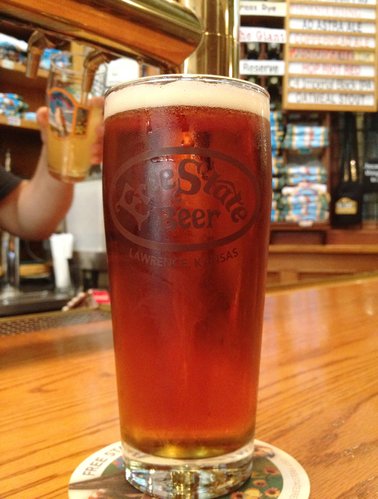 A glass of Phoenix Rising at Free State, a beer the brewery created to commemorate Quantrill's 1863 raid on Lawrence and the city's rebuilding after it. by Sara Shepherd

Today marks the 150th anniversary of Quantrill’s raid on Lawrence, and thus a great afternoon or evening to toast to the city’s remarkable rebirth. Free State Brewing Co. has created the perfect beer for this — a special commemorative brew called Phoenix Rising, now on tap at the brewpub.

Bartender Ian Sotomayor said Phoenix Rising has been popular so far. It will be available as long as supplies last, and Sotomayor estimated the brewery has enough to serve it for another week or so. Besides the beer itself, Free State also created special commemorative glasses to serve it in. There’s a limited number of the glasses, which aren’t for sale — so soak in the cool “From the ashes, immortality” design while you’re sipping because you don’t get to take it home.

A close-up of the "From the ashes, immortality" design on a commemorative glass used to serve Phoenix Rising lager at Free State. by Sara Shepherd

Here’s Free State’s full description of the bold but easy drinking brew: “This red, fiery-hued lager, named for the mythical bird that adorns Lawrence’s official seal, honors the spirit of Lawrence, in the wake of Quantrill’s raid on August 21, 1863. The attack left more than 150 dead and most of the buildings burned to the ground. This year marks the 150th anniversary of that fateful day. Pilsner and Munich malts combine with Vanguard hops, creating a balanced, malty lager with just enough hop presence. (O.G. - 13.1 P/1053 Hops - 25 IBUs)”

In related border war history-inspired beer news, Free State also is currently pouring Josiah Miller IPA. (It’s OK, I didn’t know who he was, either, even though I probably should. Free State’s beer description to the rescue.) “Josiah Miller was an anti-slavery man raised on South Carolina that moved to Kansas in 1854 and began the anti-slavery paper, Kansas Free State. He was credited with coining our state motto, Ad Astra per Aspera. This medium bodied, deep copper IPA is slightly silky from the addition of unmalted oats to the mash and definitely hoppy, with the addition of fruity/citrusy Citra hops. (O.G. 14.8 P/1060 Hops - 68 IBUs)”