Lawrence’s food truck population has tripled this year (from one to three!), and interest in them is growing, too. In case you missed the smattering of recent mentions in the Journal-World, here’s a roundup of what’s going on with the local food truck scene. 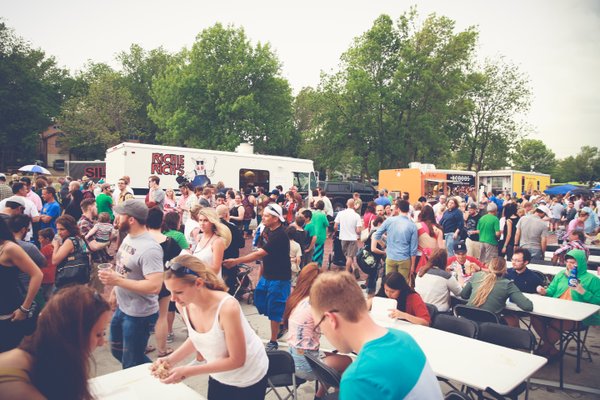 Journal-World city reporter Chad Lawhorn has been tracking an effort to give food trucks more freedom in town. Currently, trucks are not allowed to operate more than three hours a day in Lawrence, and locations where they’re allowed to park are restricted. Last week the City Commission discussed changing that, but no decision was made. Commissioners plan to talk about it again next week. (Read Chad’s most recent story here.)

There are three Lawrence-based trucks on the road, that we know of:

• The Blissful Bite, specializing in healthy food made with locally grown produce, appears to have just transformed itself into the Purple Carrot. (Here’s their Facebook page, and a feature on them I wrote last year.)

• Torched Goodness relocated here from Arizona (where Smithsonian.com named them one of the country’s 20 best food trucks) this spring and specializes in gourmet creme brulee. (Here’s their Facebook page, and more on them in Town Talk.)

• SnoFlower Shaved Ice, another new truck, operated this summer at Sixth Street and Monterey Way. Now that school has started, they’re switching to events only. (Their Facebook page, and a mention in Town Talk.)

The first Kansas Food Truck Festival happened in May, drawing a handful of trucks from the area and a big crowd to east Lawrence. (See Party Pix here.)

The Warehouse Arts District, which organized that festival, has ideas about involving food trucks in redevelopment there. One executive told the City Commission that developers want to create a “food truck garden” — permanent pad sites for multiple food trucks, accompanied by an area where operators could grow their own herbs and vegetables.

Lawrence doesn't have the nightly hungry, on-foot, food-truck-fueling crowds like, say, Westport in Kansas City, Mo. For now our food trucks appear mostly at outdoor events like the farmer's market, last weekend's Kansas State Fiddling and Picking Championships or occasional collaborations with other businesses. Following the trucks on social media (see links above) is the best way to track them.