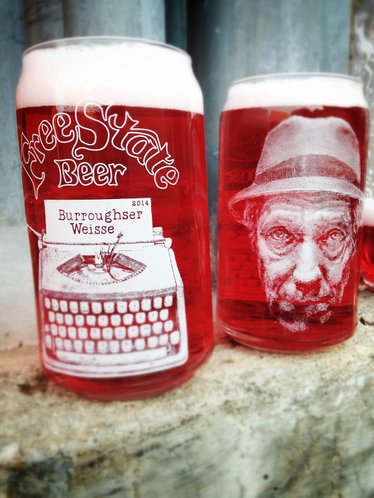 Free State Brewing Co. is paying tribute to the 100th anniversary of the birth of William S. Burroughs with a special brew called Burroughser Weisse. Pictured in this contributed photo from Free State, the fuchsia-colored beer will be served in a special commemorative glass designed by local artist Jessica Rold.

Imagine William S. Burroughs as a beer. Free State Brewing Co. did, and the result is “Burroughser Weisse.”

Tributes to Burroughs — the beat generation icon who lived his final years in Lawrence — are planned nationwide this year, the 100th anniversary of his birth. Here in Lawrence, Free State is even commemorating him with a special beer. Head of downtown brewing Geoff Deman shared these tasting notes with us today:

Burroughser Weisse takes an already esoteric beer style and turns it on its head. Based on the Berliner Weisse style known for a sour, tart finish that drinkers have historically tempered with the addition of Raspberry or Woodruff syrup, Burroughser Weisse amps up the tartness a bit with a bold addition of Hibiscus Flowers to the kettle, resulting in a bright fuchsia color in this crisp and refreshing ale.

Burroughser Weisse will be released Feb. 5, Burroughs’ birthday. It will be on draft at Free State Brewery and “select Lawrence locations” while supplies last.

According to Free State, James Grauerholz, longtime friend and Burroughs Estate executor, suggested the Berliner Weisse style after having enjoyed it with Burroughs in the city of its namesake. Deman said the beer involved production methods and practices brewers donʼt normally apply. “Burroughs employed the cut-up technique in many of his writings,” Deman said. “Burroughser Weisse can be seen as the brewing equivalent, with processes out of their typical order, coming together to make something unique and special.”