As morels spring up, so do restaurant specials

It's springtime in northeast Kansas, and for the past few weeks, the Journal-World newsroom has been abuzz with talk of a very special fungus: the morel mushroom.

Journal-World photographer and resident mushroom hunter Richard Gwin is particularly enthused, and every few days he'll show off iPhone snapshots of his most recent morel haul. You may remember this gem of a video from 2011, in which he illustrates how to track down and cook morels.

A number of restaurants in town share Richard's appreciation for the elusive (but richly flavored) mushroom, serving up a variety of morel-centric dishes while they're still plentiful along Lawrence-area river banks and hillsides.

At Merchants Pub and Plate, chef/owner T.K. Peterson has been foraging for morels for about a week now, though he estimates it'll be another week before the mushrooms start popping up on the Merchants menu. The plan is to rotate morel specials for the duration of the season, Peterson says.

Right now, he's got a few ideas: a simple pasta with shallots, wine wine, butter, garlic and maybe a bit of cream; perhaps a flatbread with fresh herbs and cheese. He's also made a jam from the mushrooms and served it with grilled meats in the past.

Rick Martin, chef-owner of Limestone Pizza, plans to offer a morel pizza topped with Gruyere cheese and cream. It was a big hit last year with customers, he says.

Have you tried any of these specials yet? Any I missed out on? We've still got at least a few weeks until morel season ends — when temperatures hit 80 degrees, from what Richard tells me — so I'll keep an eye on social media to see what dishes pop up at local restaurants. 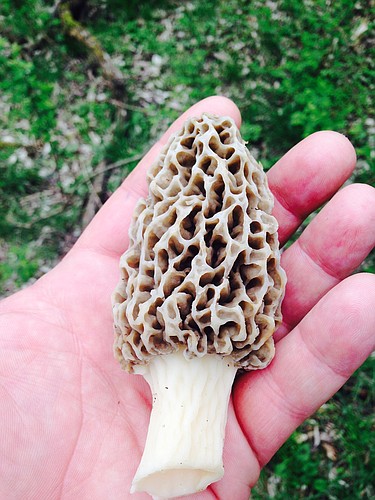